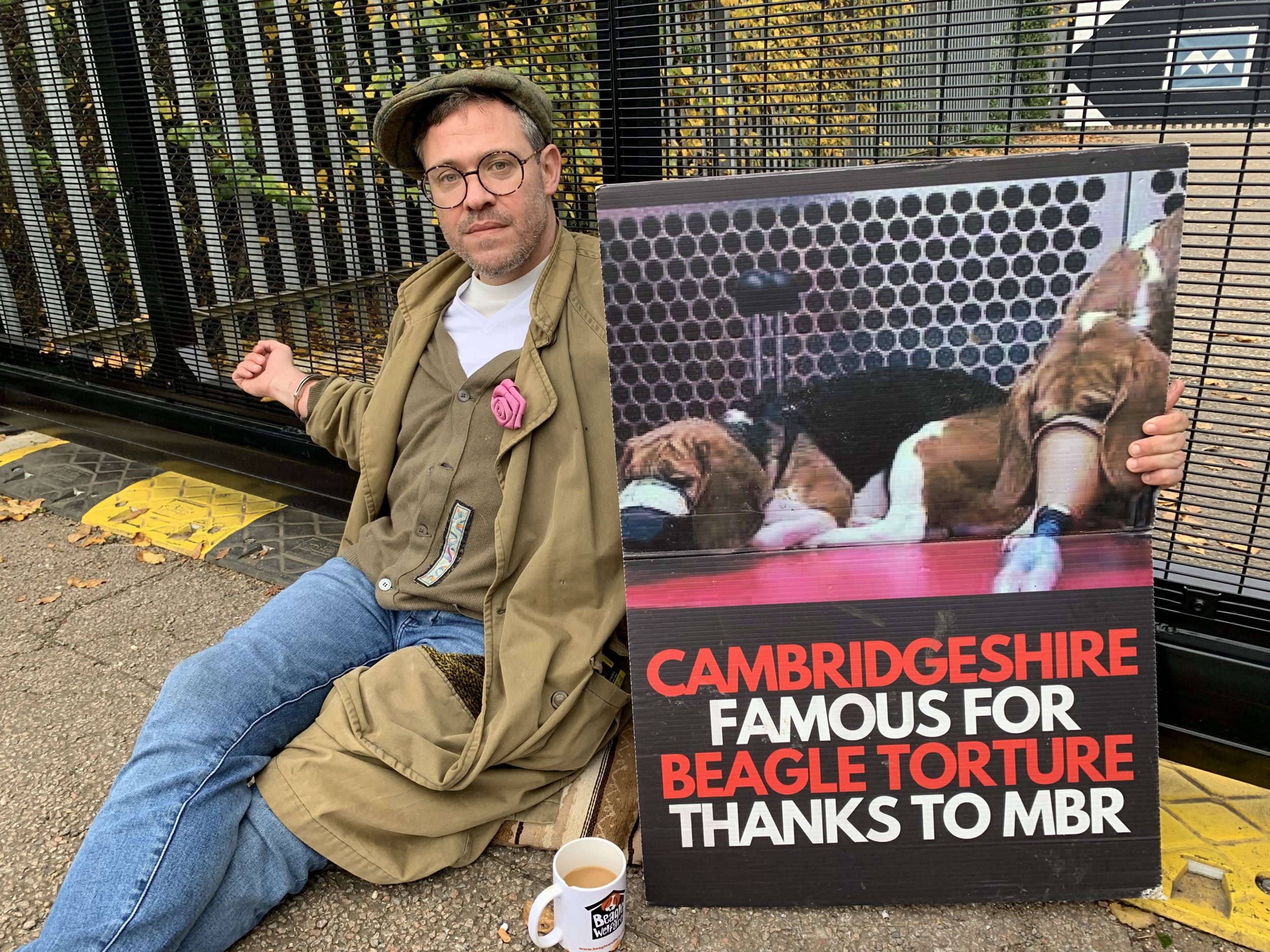 Will Young has handcuffed himself to the gates of a facility that breeds dogs for laboratory research, in protest of the practice.

The Leave Right Now singer joined campaigners at MBR Acres in Huntingdon, Cambridgeshire, to call for the facility to be shut down.

In a picture shared by the campaign Camp Beagle, the 42-year-old was seen sitting on the ground, wearing a flat cap, a khaki jacket, a white T-shirt and jeans, with his right wrist handcuffed to the bars.

In the other hand, the Pop Idol winner held a poster reading: ‘Cambridgeshire famous for beagle torture thanks to MBR.’

While Will may have looked like he was alone, numerous campaigners stood on the opposite side of the road, chanting for the beagles to be freed and holding up their own signs.

Animal lover Will shared the photo to his Instagram stories and wrote: ‘I look like Steptoe and Son! Free the beagles and stop animal testing.’

He told Metro.co.uk: ‘I wanted to bring attention to animal testing and the fact that this is a puppy farm that farms over 2000 beagle puppies a year to be sent out to their inevitable torture and death.

‘People do not know about it in this country and that is why I’ve handcuffed myself to the gates.’

Hattie, a member of the Camp Beagle campaign, told Metro.co.uk: ‘He had said he would come and visit. We were expecting today another van load of puppies to be forcibly taken from MBR, and we put the call out, and Will answered that call for help.

‘Everybody who has a dog or knows a dog or is a fan of dog should be saying “enough is enough.” This is a horrendous, dangerous, barbaric practice.’

At one point, police were seen speaking to Will.

The Evergreen singer, who is celebrating 20 years in the music industry, is a big dog lover and has four himself, including two, Domino and Diamond, who he rescued after they faced euthanasia in America.

MBR, or Marshall BioResources, breeds between 1,600 and 2,000 beagles per year, with the dogs then being brought to animal testing laboratories around the UK at around 16 weeks old.

The dogs are then exposed to and fed various substances to measure the effects of repeat exposure on the liver, kidneys, lungs, heart, and nervous system.

Many of the dogs are then killed at six months old.

UK law currently requires all new medicines to be tested on two animals before being allowed on the market — one rodent and one non-rodent, commonly a dog.

Explaining the campaign’s objectives, Hattie said: ‘We want two things – we want MBR Acres to close down and we want them to give those beagles to us to rehome, we’ve got homes waiting. And we want the government to hold EDM 175, which is an independent scientific debate to review the success of scientific animal experiments.’

Camp Beagle argues that the breeding of beagles for animal testing is dangerous to humans as well, due to the failure in finding human treatments and cures.

According to the FDA in the US in 2006, nine out of 10 experimental drugs fail in clinical studies because how they will behave in people cannot be accurately predicted based on animal studies.

Camp Beagle, who are not a vegan campaign, have been protesting at MBR Acres since June, with a number of arrests being made amongst campaigners and MBR Acres being granted an order to allow police to remove protesters from the site.

Employees alleged that they were being harassed by ‘vicious’ campaigners.

In August, a statement from MBR read: ‘We should stress that we have no interest in stifling legitimate protest provided it is conducted lawfully and peacefully, but we absolutely are concerned to stop those protesters who were conducting a vicious and unwarranted harassment and intimidation of our staff and others.

‘Those protesters are now barred by the court from their campaign of harassment, trespass and criminal damage directed against our staff, contractors, and visitors.

‘We will continue to run our operations in full compliance with Home Office regulations and with our normal high welfare standards.

‘We remain proud of what we do every day because our work allows the progress of medicine to save millions of human and animal lives.’

Ricky Gervais has also lent his voice to the opposition against beagle breeding for laboratory testing, previously saying: ‘I’m deeply shocked to learn that thousands of beautiful Beagles are intensively bred, right here in the peace of the British countryside, for painful and terrifying toxicity experiments that are also now proven to entirely fail the search for human treatments and cures.’

MORE : Daniel Radcliffe and Emma Watson to John Cleese and Alfred Enoch: Where are the cast of Harry Potter and the Philosopher’s Stone now as film turns 20 years old?

© Copyright 2017 -Omigy.co.uk
We use cookies to ensure that we give you the best experience on our website. If you continue to use this site we will assume that you are happy with it.Ok