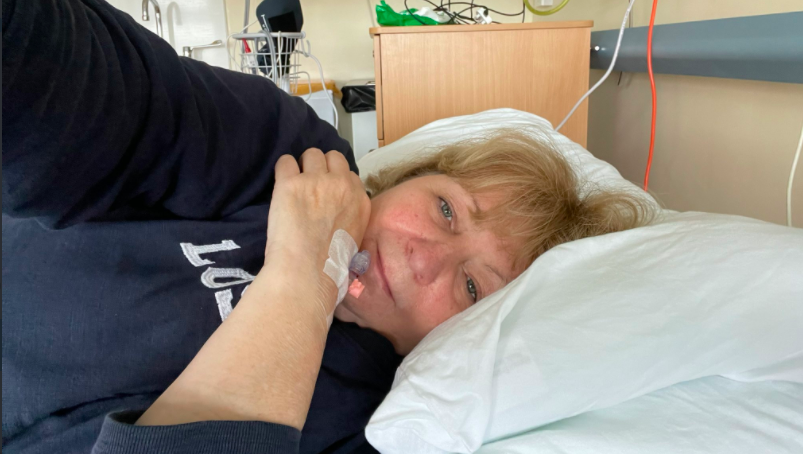 Comedian Janey Godley has revealed she has been diagnosed with ovarian cancer.

The 60-year-old shared a selfie from her hospital bed as she cancelled her upcoming tour dates due to her health problems.

Godley tweeted: ‘Sorry but my last weekend of the tour can’t go ahead in Edinburgh and Musselburgh as I am in hospital with ovarian cancer – look after each other #MentalHealthMatters.’

Fans and friends replied sending their best wishes, including writer Tim Walker, who tweeted: ‘Thank you for being you, Janey. A force for good and light and laugher in a world too often bad and dark and joyless. We are all willing you on.’

In a separate video, Godley revealed she only received her diagnosis yesterday, after having symptoms including bloating in her stomach, feeling full before she’d eaten and having ‘no real energy’.

She said: ‘The tour has been so brilliant and so very well attended and successful, but unfortunately, I was doing the tour while unbeknownst to me, I had ovarian cancer.

‘I just got checked out yesterday and that’s why I’m now in this very beautiful but very stormy corner room hospital in Glasgow.’

The stand-up praised the NHS for being ‘fantastic’, and thanked fans for their kind messages.

The Scottish star had been touring around the United Kingdom throughout October and November, last playing Perth Concert Hall on November 17.

Her final dates at Edinburgh’s Festival Theatre tonight and two shows at The Brunton in Musselburgh on Saturday will no longer go ahead.

Godley has another string of dates across the UK confirmed, beginning in March 2022 in Carlisle and continuing into April.

Her health news comes two months after the comic was dropped from a Scottish government campaign promoting the use of face coverings and lateral flow testing during the pandemic.

Tweets between 2011 and 2017 resurfaced in which Godley used offensive language about Black celebrities, disabled people and Chernobyl victims.

In 2011, while Kelly Rowland was a judge on The X Factor, Godley referred to the singer as ‘the black horse from USA’ and tweeted: ‘Kelly does speak like the stereotyped black Aunt Jemima who stands on a stool in the Tom & Jerry cartoons screaming ‘TOM TOM’.’

She apologised for her ‘horridly offensive’ posts and said: ‘People have every right to go through my social media and see what values I hold and to find hurtful phrases and statements is shocking, I am deeply sorry to everyone I offended.

‘Comedy is no excuse to use disgusting and hurtful words that affect people and I know many of you expected better of me. I apologise for every single word that upset people.’

Godley is best known for her comedy voiceovers of politicians, including Nicola Sturgeon, and has appeared on shows including Have I Got News For You.

I’m a flight attendant and here’s how to stop your ears from popping while...