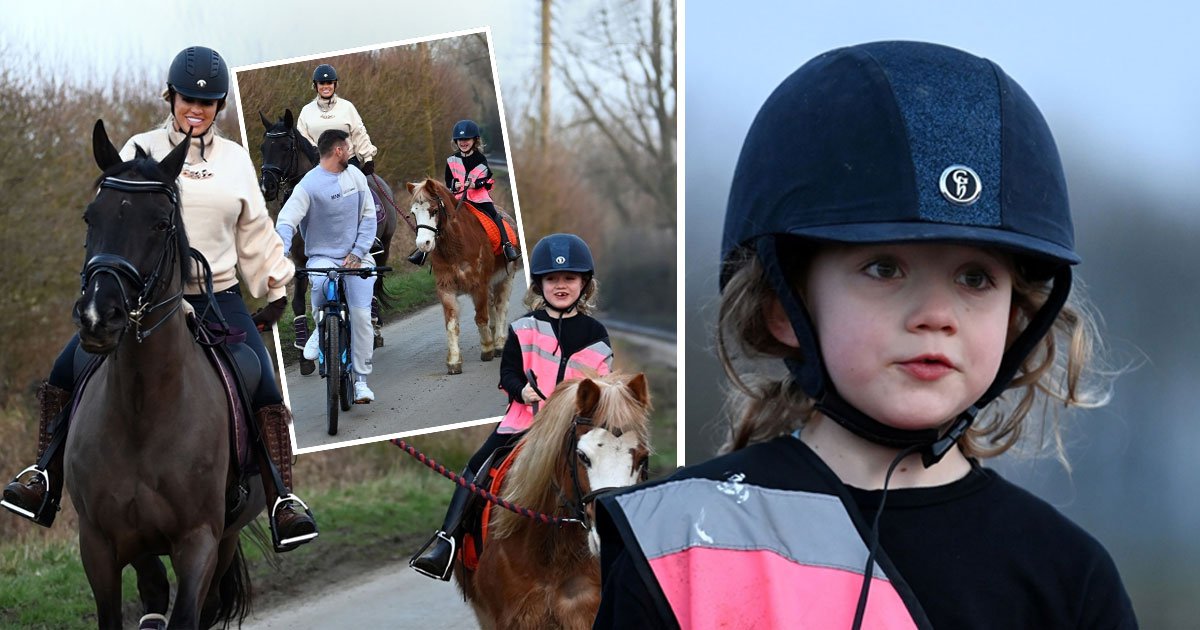 Katie Price enjoyed a day out at the stables with her boyfriend Carl Woods and her daughter Bunny on Thursday.

The 42-year-old took to the countryside roads to stirrup some trouble a day after she fuelled pregnancy rumours by teasing ‘exciting news soon’.

Dressed for maximum comfort while in the saddle, the former glamour model wore a baggy white hoodie and black leggings.

The TV personality, who broke both her feet during a freak accident last year, wore a protective helmet.

Katie’s six-year-old daughter Bunny followed in her footsteps as she galloped alongside her.

The mother-of-five has previously credited horse-riding for being ‘mentally’ good for her, and her love for all things horses has even spilled over into her business ventures.

As well as owning her very own bright pink horsebox and her own stables, Katie formerly launched her own equestrian line that she was later forced to shut down due to financial struggles and has since said she hopes to revive.

The pair have yet to announce their news, but fans are convinced she has a bun in the oven.

Katie has made it known she has been trying for a child with Carl since October, and has been keeping an eye on her hormones and ovulation since.

The lovebirds set tongues wagging two weeks ago when Carl was spotted walking out a chemist with a pregnancy test.

Speaking to The Sun late last year, Katie confessed she wants nothing more than having a child with Carl.

‘It would be amazing to enter the New Year with a baby on the way and a ring on my finger. We’ve been trying.’

She said: ‘It’s all happened really fast but I know Carl is the man for me. He’s The One and I couldn’t be happier – look at me!

Kim Kardashian feels ‘a lot of empathy’ for Britney Spears after watching documentary as...

Head to the Greek island of Crete for fab food, breathtaking views and sandy...