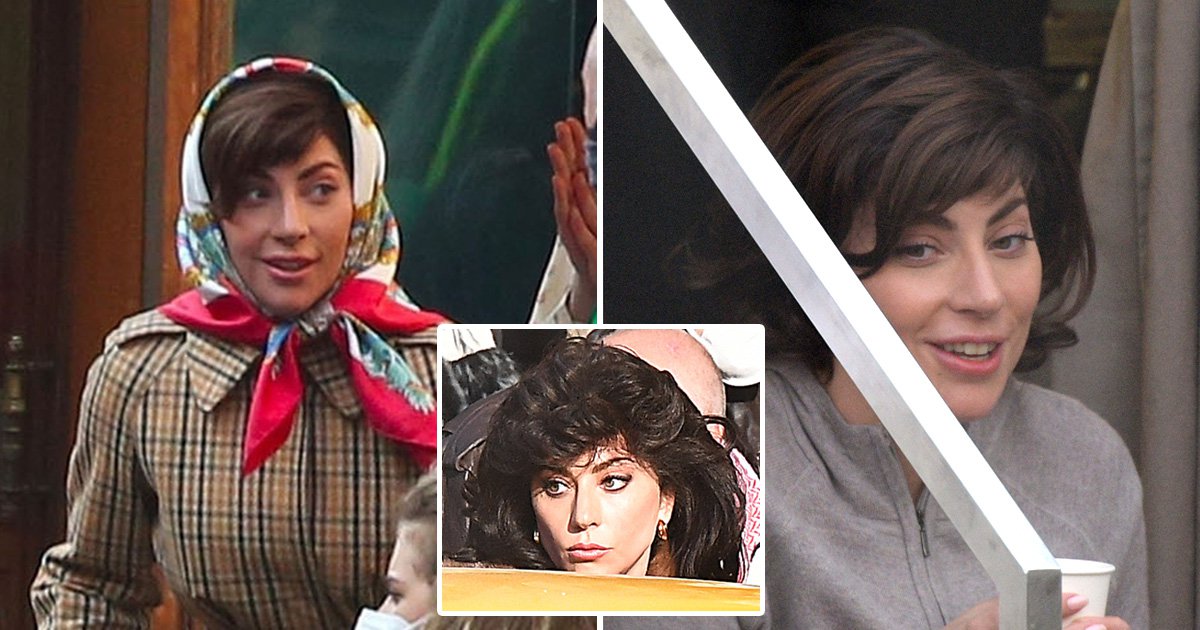 Lady Gaga has undergone an impressive transformation on the set of Ridley Scott’s upcoming murder biopic House of Gucci.

The singer, 34, takes a leading role in the movie alongside actor Adam Driver, 37, and the pair was seen on set in Milan, Italy on Wednesday.

The film is about the 1995 assassination of Italian businessman Maurizio Gucci by his ex-wife Patrizia Reggiani, who was given a 29-year jail term for demanding his murder.

Gaga’s familiar blonde hair was nowhere to be seen as she donned a short dark wig.

She looked glamorous in a silk Gucci scarf and Burberry trench coat as she transformed into late Maurizio’s spouse.

The Paparazzi singer, real name Stefani Germanotta, had on a pair of nude Gucci loafers and carried a black handbag as she got stuck into work following the recent drama that saw two of her dogs stolen in Los Angeles when her dogwalker was shot in a horrific attack.

Her co-star Adam was also seen nearby wearing a knitted jumper and trench coat.

The crew members were clearly abiding by Italian coronavirus restrictions as they wore facemasks in a bid to protect themselves and their colleagues from the illness.

House of Gucci is about Patrizia’s plot to kill her ex-husband and it is based on the book The House of Gucci: A Sensational Story of Murder, Madness, Glamour and Greed by Sara Gay Forden.

She was left heartbroken 10 years prior when her husband left her for another woman after telling her he was leaving briefly for a short business trip.

Patrizia was said to be furious and fearful her daughter would miss out on her $170million inheritance money if her ex remarried.

Maurizio Gucci was shot at the order of Patrizia by pizzeria owner Benedetto Ceraulo who was keen to pay off his mounting debt. He was handed a life sentence in prison as a result.

The murder plot was revealed to police by clairvoyant and informer Pina Auriemma.

Patrizia was known for wearing all-Gucci outfits and accessories during the trial which had Italy transfixed at the time.

The scorned wife ended up serving 18 years of her sentence and she was allowed to have her pet ferret with her for company some of the time.

Her husband Maurizio was the grandson of Guccio Gucci who founded the high-end fashion empire which took the family surname.

However, the label encountered problems in the early 90s and he sold it for $120million.

MORE : Dakota Johnson has perfect response after father Don cut her off from family payroll for choosing acting over college

Can I visit Scotland? Latest advice as Sturgeon reveals plan for easing lockdown