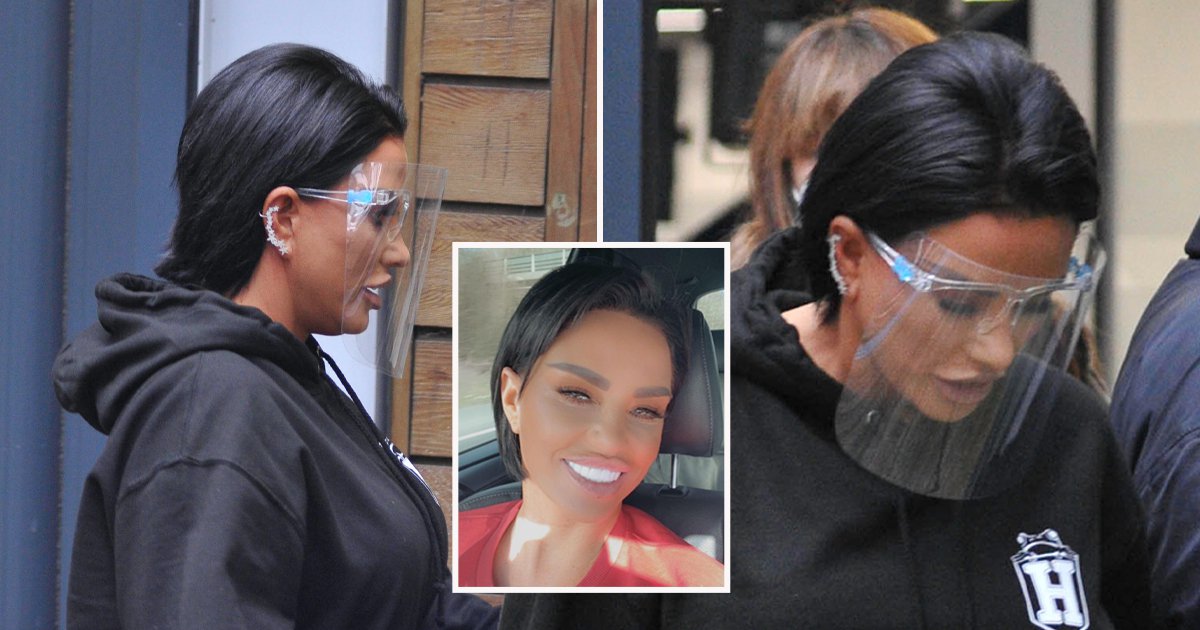 Katie Price may be known for her long and luscious locks, but she’s decided to embrace a total new look that’s seen her ditching her beloved wigs.

Ahead of her TV appearance on Channel 4 show Steph’s Packed Lunch, Katie felt like giving herself a little hair-over and opted to travel to the studio rocking a glossy bob cut instead of her trademark extensions.

The former glamour model, 42, was seen arriving at the studio in Leeds Dock with her natural hair that nowadays just grazes her shoulders.

It was a whole new look for Katie, who first revealed that she’d gone for the chop on her Instagram page.

Showing off her shorter style on social media, Katie took a selfie in the car and told fans: ‘I’m feeling so happy.’

She then asked her followers if they prefer her with or without her usual wigs, with many rushing to tell the former I’m A Celebrity star that they’re loving her new look.

‘Hair looks amazing,’ one fan wrote, while another posted: ‘Love the hair it suits you! Glad you’re happy.’

‘Love your hair like this,’ commented another, as one more fan told Katie they were all for her more ‘natural look’.

As she arrived ahead of her appearance on Steph’s Packed Lunch on Wednesday, Katie was sporting a tracksuit from her son Harvey’s clothing collection with Born Anxious – a homegrown clothing line that specialises in sensory wear.

She was joined by boyfriend Carl Woods, who was also decked out in the clothing range.

Katie’s outfit had Harvey’s initial and a picture of a frog as its crest design and was a fitting choice, as Katie appeared on the daytime programme to launch her new petition Track A Troll.

As part of her Harvey’s Law initiative that hopes to enforce a crackdown on online trolling, Katie is hoping to secure measures in place that will enforce social media apps and websites to ask for identification from its users.

Speaking live, Katie said on the show: ‘I get messages all the time thtough social media asking me for help and what my law can do.

‘With Harvey’s Law it went to parliament and they all agree with me that something needs to happen. Harvey’s law is to make online trolling a criminal offence or to go on the register.’

‘I’ve started a new petition and it’s called Track A Troll – any online sites or apps, because the future is online, you have to have ID or if you’re under 18 for your parent or guardian to sign you in,’ she explained.

Pointing out the devastating impact trolling can have on mental health, Katie insisted: ‘There should be some kind of law where you can be ID’d basically.’

Speaking previously about her experience with social media abuse, Katie said: ‘For every post I put up, there’s a small group of people who like to cause trouble… when people ask me about trolls and how I cope with it and deal with things – to be honest, I’ve been trolled so many times myself and I’m used to it.’

It’s not just her that faces hate on a regular basis, as Harvey is often subjected to trolling online – although Katie says he isn’t aware of the abuse targeting him – and her son Junior, 15, has previously been sent vile comments about her.

Katie said as a mother it ‘breaks her heart’ not being able to protect them from online trolls. She added: ‘As a mother, it’s so hard to know I can’t protect and shield my children and it breaks my heart what I have to read and go through with my children, especially Harvey because he just gets abuse.’

The Bachelor: Matt James weeps as Serena Pitt dumps him after hometown dates