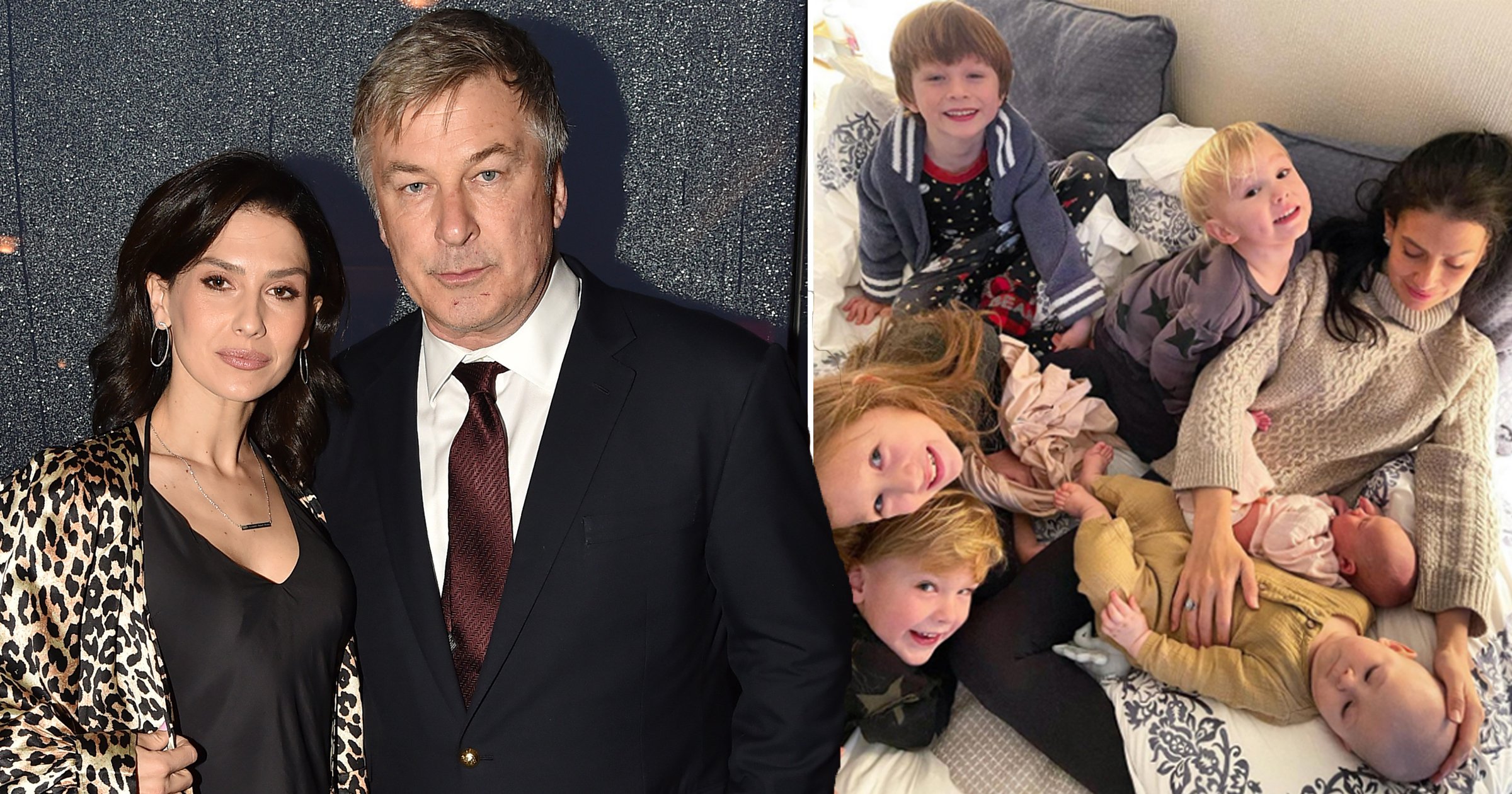 Hilaria Baldwin has thanked the ‘special angels’ who brought her daughter Lucia into the world, after she suffered a pregnancy loss in 2019.

The star and her husband Alec Baldwin stunned fans this week when they announced they had welcomed their sixth child, just six months after Hilaria gave birth to their son Eduardo.

While Hilaria, 37, has not divulged whether Lucia was welcomed via surrogate or adoption, she explained that her children ‘craved’ a sister after she suffered a miscarriage on a baby girl two years ago.

The yoga teacher shared an adorable picture of Lucia next to her slightly older brother Edu, and wrote: ‘Our hearts are filled with so much gratitude. The Baldwinitos craved so much to have a little sister. Many of you may remember the loss of their sister at 4 months in the end of 2019. There isn’t a day that goes by where we don’t ache for our daughter. When I found out our baby had died, I told our children that their sister was going to come, just not at that time.

‘Nothing will ever replace her, but two wonderful souls have come into our lives, and we are humbled to know them. Our children were brave during our time of tremendous grief—braver than us…and they held out hope. To experience and accept life’s ups and downs is challenging, but a reality that all of us have no choice but to receive and process. I have learned that often our children are wiser than we are and their wisdom has guided us.

‘Our rainbow baby, Edu, is such a blessing—we are overwhelmed by how fortunate we are to have him. We are living each day, bonding, and grateful for all of the very special angels who helped bring Lucía into the world.

‘María Lucía Victoria and Eduardo Pau Lucas: our babies who bring light into our lives—almost like twins, we love you so much.’

In November 2019, the presenter shared the sad news that she had lost her baby, a girl, four months into her pregnancy.

Hilaria had previously suffered a miscarriage in April of the same year.

She shared on Instagram: ‘We are very sad to share that today we learned that our baby passed away at 4 months. We also want you to know that even though we are not ok right now, we will be. We are so lucky with our 4 healthy babies—and we will never lose sight of this.

‘I told Carmen and took this so I could send it to Alec. I guess this is a good way to share it with you too. I told her that this baby isn’t going to come after all…but we will try very hard to give her a little sister another time. I’m really devastated right now…I was not expecting this when I went to my scan today. I don’t know what else to say…I’m still in shock and don’t have this all quite clear.’

Soon afterwards, Hilaria became pregnant with her son Edu, who entered the world in September 2020.

She and Alec, 62, are also parents to Carmen, seven, Rafael, five, Leonardo, four, and two-year-old Romeo, while Alec is dad to Ireland, 25, from his marriage to Kim Basinger.

While clearing up rumours about her heritage, after accusations that she was faking being Spanish, Hilaria explained that all of her kids had Spanish names because they were named after people in her life.

She told the New York Times: ‘My intentions are I’m living my life and my life is created by my parents, my different experiences, my languages, my culture and, yeah, my kids do have very Spanish-influenced names.

‘Their names are after people who were important to me, they’re not names that we pulled out of a hat. All my kids’ given names, the first names, are all from people in my life, and they have my husband’s last name. And we were very thoughtful about it. Especially the second name, sometimes the first name is something that sounds for me, good in both languages.’

Hilaria, who was born in Boston but spent time in Spain with her family growing up, added that she is raising her children as bilingual and speaks Spanish to them in their home.

Sands UK is a stillbirth and neonatal death charity, which works to reduce the number of babies dying and to ensure that those affected by the loss of a baby receives the best possible care for as long as they need it.

The charity aims to better understand the causes of baby deaths and works with governments and other organisations to raise awareness of issues surrounding baby loss.

Sands provides bereavement support at a local and national level.

MORE : You Are What You Eat to make overdue return without Gillian McKeith as Trisha Goddard takes over to examine poo and kickstart families into better health

Race to the sun: Cyprus declares it will open to vaccinated UK holidaymakers