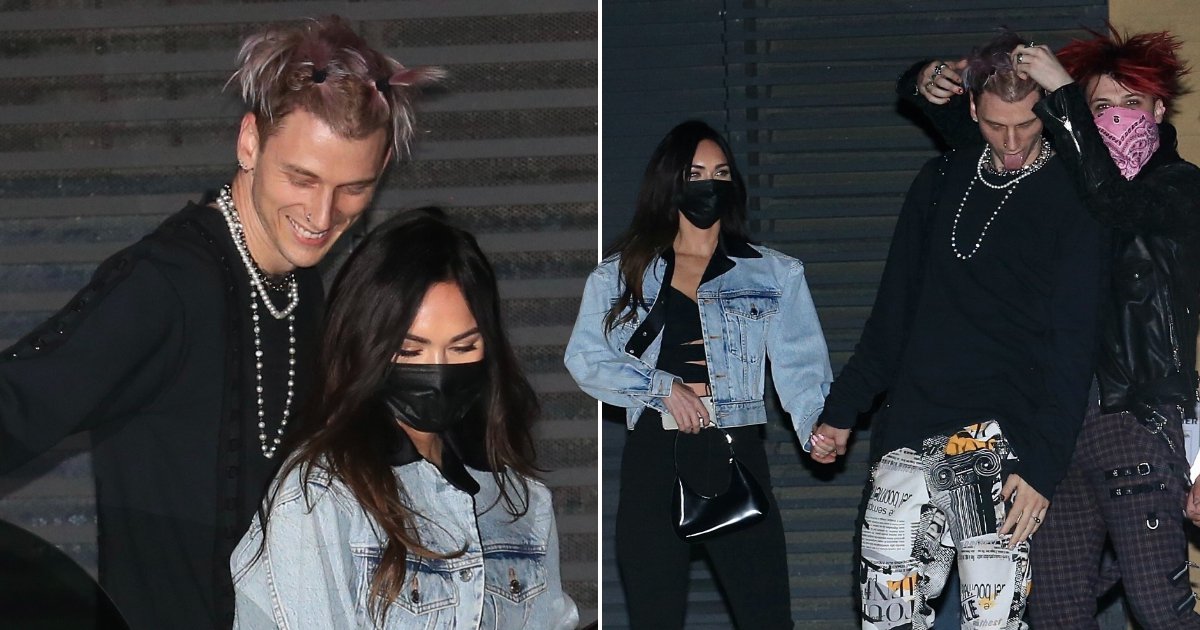 Three certainly wasn’t a crowd for Megan Fox and boyfriend Machine Gun Kelly, as they brought along pal Yungblud on their date night.

The couple were spotted with the musician and singer Ian Dior as they dined at Nobu.

They left the restaurant holding hands as they mucked about with their mates in the street.

The necklace containing a drop of girlfriend Megan’s blood he had made wasn’t visible among his accessories, unless he tucked it inside his top for safe keeping.

The Jennifer’s Body star, who recently shut down rumours she is engaged to MGK, the looked stylishly understated in a black crop with jeans and a denim jacket with heels, wearing a black face mask to match.

Singer Yungblud, real name Dominic Harrison, also made sure his face mask matched, sporting a bright pink bandana over his face to go with his pink socks, which he wore under a checked trousers and a leather jacket.

He was seen playing with MGK’s hair as they piled out of the restaurant.

The vial of blood was meant as a romantic gesture which Machine Gun Kelly revealed as he spent his first Valentine’s Day with the actress.

Megan, 34, posted a dramatic message about her new man on Instagram to mark the occasion, writing: ‘There goes my heart/ manifest outside of my body/ draped in the towering silhouette of a most unusually handsome boy.

‘Magical and haunted/ kinetic and tortured/ ethereal and dangerous/ cosmic lawless eternal creative genius/ the journey will likely be perilous/ but there is no destination without him.

NWA Back For The Attack: Billy Corgan confirms return for iconic wrestling promotion