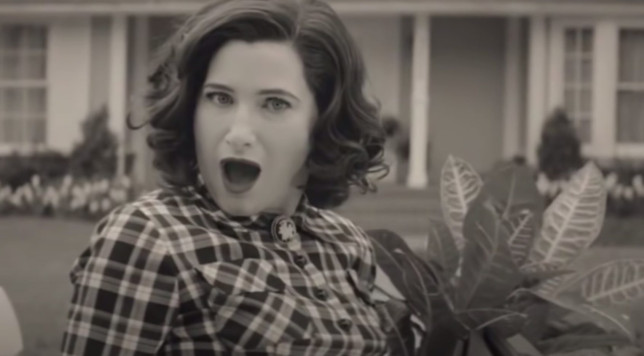 Warning: if you’re not up to date on WandaVision, major spoilers ahead.

In episode seven of Marvel’s WandaVision, it was finally confirmed that neighbour Agnes (Kathryn Hahn) is actually a witch called Agatha Harkness, a powerful being who’s been messing with Wanda Maximoff (Elizabeth Olsen) and comes with her own theme tune titled Agatha All Along.

If you’re a WandaVision fan, there’s a strong chance the song has been stuck in your head over the past week, particularly considering it’s already a chart-topping hit.

But other than the fact that it’s insanely catchy, there may be another reason why the tune has lodged itself firmly in your brain.

It turns out the motif from the theme song has been featured in every single episode of WandaVision, weaving itself into the show so subtly so as to go virtually unnoticed.

Frozen songwriter Kristen Anderson-Lopez, who composed the song alongside her husband Robert Lopez, shared a video on Twitter that explained the notes that every theme tune on WandaVision has in common, with each of the melodies taking inspiration from classic American sitcoms.

‘If you are wondering why you were so ready for the last song, it’s because you were hearing the same song week after week,’ Kristen tweeted.

In the video, it demonstrates how the same motif was incorporated into the theme songs, which were inspired by programmes including Bewitched and Malcolm in the Middle.

At the very end, these notes are used to formulate Agatha All Along, which features Agatha actor Kathryn on lead vocals.

It just further emphasises how cunning Agatha was to integrate herself into the lives of Wanda and Vision (Paul Bettany) without the couple realising that she was a threat.

Several WandaVision fans expressed their disbelief over the Agatha All Along revelation.

‘Like I needed more proof that you two are just pure genius!’ one person tweeted Kristen.

‘I recognised it in some moments, but holy cats I missed it so many other times. That’s GENIUS,’ another said.

In episode eight of WandaVision, it is finally uncovered how Vision is alive in the neighbourhood of Westview, having been killed by Thanos (Josh Brolin) in the 2018 film Avengers: Infinity War.

The post-credits scene also revealed what became of Vision’s body in the real world, with acting S.W.O.R.D. director Tyler Hayward (Josh Stamberg) keeping his true intentions for the sentient being’s body under wraps.

WandaVision is available to watch on Disney Plus with a new episode being released next Friday.