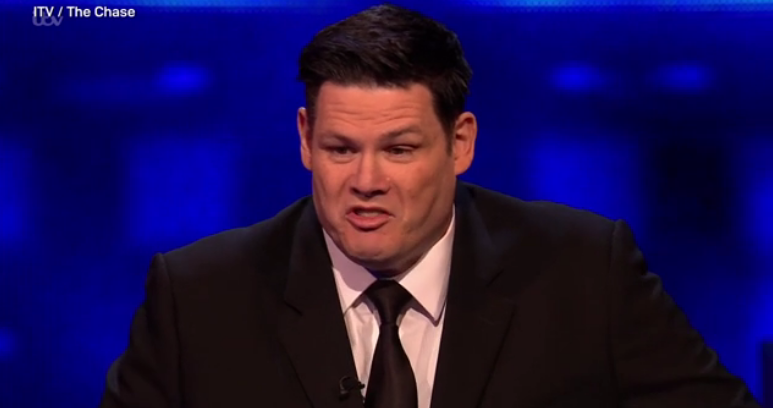 As each of the hopefuls stepped up to take on The Beast in the cash-building round, despite being offered staggering amounts of money, all four decided to ‘play it safe’ and take his lowest offer.

During the cash-building round, each contestant attempts to accumulate money for the team’s prize fund. They take it in turns to go against The Chaser by answering as many questions they can within one minute, with each correct answer worth £1,000.

The Chaser then gets to choose the boundaries between a higher offer, the contestant’s earned money and a lower offer.

To which Mark replied: ‘It’s certainly a reasonable strategic choice, I think there are a few people watching the tele that might be screaming but, they’re not here and you are.’

And, it Rory’s fellow contestants followed suit. When it was their turn to go against Mark, they also opted for the lowest offer of £1,000.

When final contestant Richie stepped up to take on the Chaser, Mark told him: ‘Richie, either way, whatever you do next will make television history.’

Mark added: ‘That’s the first time that it’s ever happened anywhere in the world, every team member going low, you’ll be YouTube sensations.’

Host Bradley then chipped in: ‘I don’t think this team is here to win money.

‘I think they just want to beat The Beast.’

Viewers just couldn’t get over the fact all four players ‘played it safe’, taking to Twitter one quizzed: ‘They are a good team why did they all go low, it doesn’t make sense.’

Another baffled viewer commented: ‘Why they all going low.. thought the idea of going on TV quiz shows was to get money! Early ones are like.. I’ll get safe you lot do the hard work!!’

While one added: ‘I hope this teaches future contestants not to go low when they don’t have to.’

The Chase airs weekdays at 5pm on ITV.

MORE : Gogglebox cast reach out to Tom Malone Jr. as he suddenly quits day before series returns to Channel 4

Backstage With… the Golden Globe nominee who prayed to get out of Billie Holiday...

‘There’s no evidence that pets can pass coronavirus to humans,’ claims doctor

Ant Middleton criticises SAS: Who Dares Wins as ‘managed and inauthentic’ as he walks...