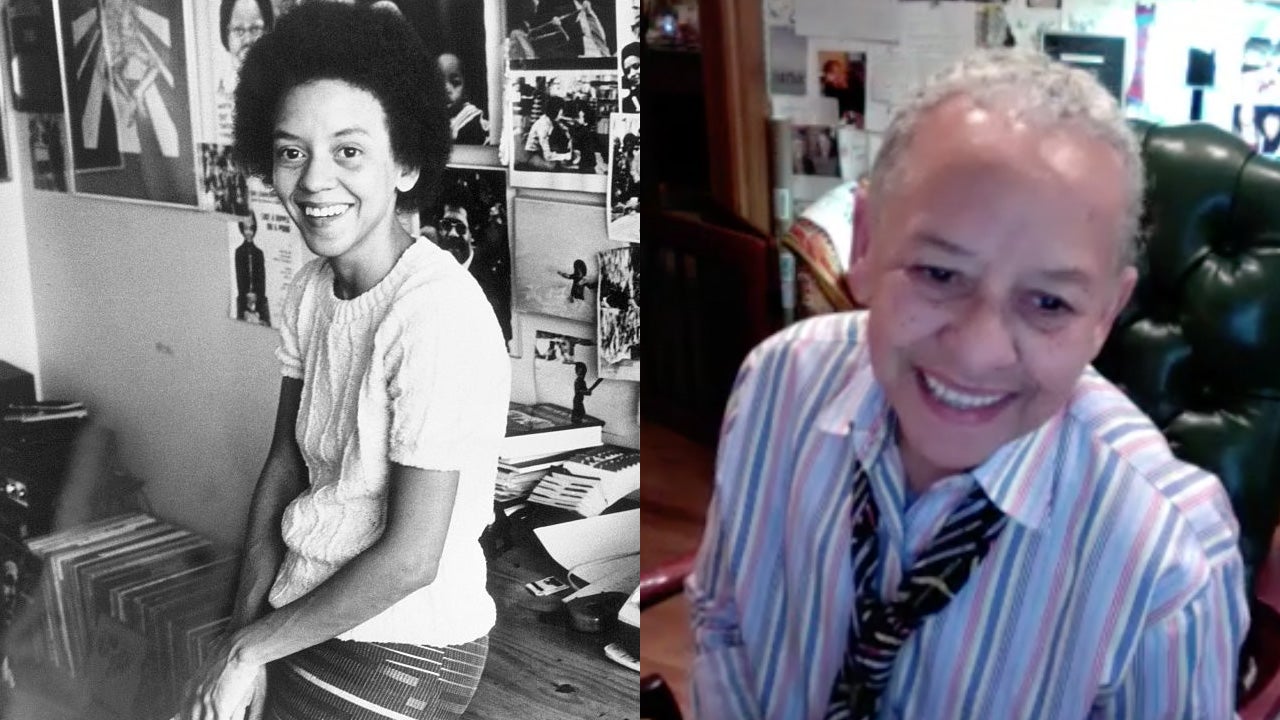 Like most people during the snowstorm that wiped across the nation last week, Nikki Giovanni was stuck at home. Giovanni, considered one of the most influential American poets of her time, was born in Knoxville, Tennessee, but for the last 30 years, has called Virginia home.

With the exception of taking her dog out for a brief bathroom break, Giovanni was peacefully snowed in, her days spent teaching lectures, writing, tending to her Rosemary bush, and savoring her morning coffee. That week, nothing had been open in her small, rural town, except, she said, for Starbucks.

“The people there are so friendly,” Giovanni told Inside Edition Digital. She then proceeded to sing the theme-song of the 1982 T.V. series, “Cheers.”

“You really feel like you’re at home there,” she said, quickly adding, light with laughter, “but you didn’t call me to discuss coffee, did you?”

Giovanni spoke from her home office––a room with stacks of textbooks hidden in corners and with photos lining the wall––where she also teaches to students at Virginia Tech, a college in Blacksburg. She has been a professor there since 1987.

“I think it’s important that Americans really take a moment to take a look at the history of our nation, some good, some we wish did not happen,” she said over the video call. “We can’t just say slavery wasn’t a thing. It’s what made America.”

“The work and the intelligence of the slaves helped make America.”

Seated in a Myrtle green leather chair, dressed in a colorful striped, slightly over-sized button-down shirt, with a loose tie wrapped around the collar, Giovanni speaks with youthful energy.

Giovanni came into the spotlight as a young woman in the 1960s around the time of the Black Arts Movement, writing about critical political moments of her time and understanding her place in the world as a Black woman. She has performed at Afro Punk, published 12 children’s books, eight works of nonfiction, recorded several spoken word albums, and famously interviewed the late James Baldwin, which premiered in 1974 on the television program, “Soul!”

Last fall, her new book of prose titled, “Make Me Rain,” was published and in November, her poem, “Dream,” was featured in an ad for then-presidential candidate Joe Biden’s campaign.

And, after all of these years, Giovanni still continues to do what she does best: write.

But, there are some things, she said, she won’t put down on paper.

“I don’t know that I will, in fact, ever write anything about January the sixth,” she said. “It was a sad, bad day, but I don’t know.

“But I did write about September the 11th. And I went back to reread that poem to see if I needed, or if I could, write something about January the sixth. And I realized, no, because September the 11th did it. I did everything that I had to do.

“We have to remember that the White House was designed by Black men…and that black men carried those bricks that made the house. Black men built the Capitol,” she continued.

She was unable talk about Black history without talking about what she loves most: food. More specifically, southern food.

“The more we learn about each other, we learn it through food.”

Through her love of cooking, it’s clear that Giovanni understands cultures by embracing their culinary customs.

“We use food to celebrate culture and we’re competitive about it, too. It’s fun, we don’t have a war over that.

“There are things we can do competitively, that don’t have to have a bullet in it,” she continued. “I think as we’re continuing to learn about each other, we need to spend more time on what is good.”

Giovanni, now 77, has cooked her whole life. But she does not call herself a chef.

As is evident in her poetry, Giovanni likes to defy the odds. So is true in her cooking; she uses oranges when she’s out of lemons, she fries green tomatoes in duck fat and rubs her chicken with as much ginger she wants.

A recipe, she said, she made once before for her friend and poet, the late Maya Angelou.

“One day, Maya told me: ‘you’re always saying how you know how to cook, why don’t you come down and cook for us.’” so I said, ‘absolutely.’”
Giovanni, who said confidently that she makes the best fried chicken, instead, decided to bring a couple of racks of lamb chops.

She cooked for a small group of friends, including noteworthy ones like Angelou and Oprah Winfrey –– the two were longtime friends.

“I cooked a hell of a fine dinner,” she continued. “And so, Maya sits at the end of the table, and she bit into the rack and looked up and said, ‘well, it needs a little salt.’” Giovanni bent over with laughter. “I said, ‘girl you got to quit it this is the best rack of lamb you ever had!’”

Angelou, who was born in Missouri, also cooked a great fried chicken.

“I think you’d have a hard time running into a Black woman who doesn’t think she cooks the best fried chicken,” she said during the video interview. “I happen to know mine is.”

Most recently, her own cooking was featured in New York Times Cooking. She mustered up an old corned beef taco recipe.

Looking back at her poetry, she can’t help but remember how desperately misunderstood she felt when reading White poetry.

“You were always hearing about what White people were saying about your childhood. I was tired of somebody else telling me who I am and what I should be,” she said.

So, she wrote her first poem titled, “Nikki Rosa.”

“I always said to my good friend Toni Morrison, I always said, ‘how can you write a long story like that, and keep up with the characters?’”

“I couldn’t possibly do that.”

“For me, it was always going to be a poem,” she continued. “What I had to say, I was going to say and that was going to be the end of it,” she said. “It’s like when you know the food is finished! You just know. When you stop, when you get to the end, you have to let it go.”

January Jones and Kiernan Shipka tried on their Golden Globes dresses from 10 years...

Chris Harrison addresses ‘Bachelor’ controversy after temporary departure: ‘I am an imperfect man’