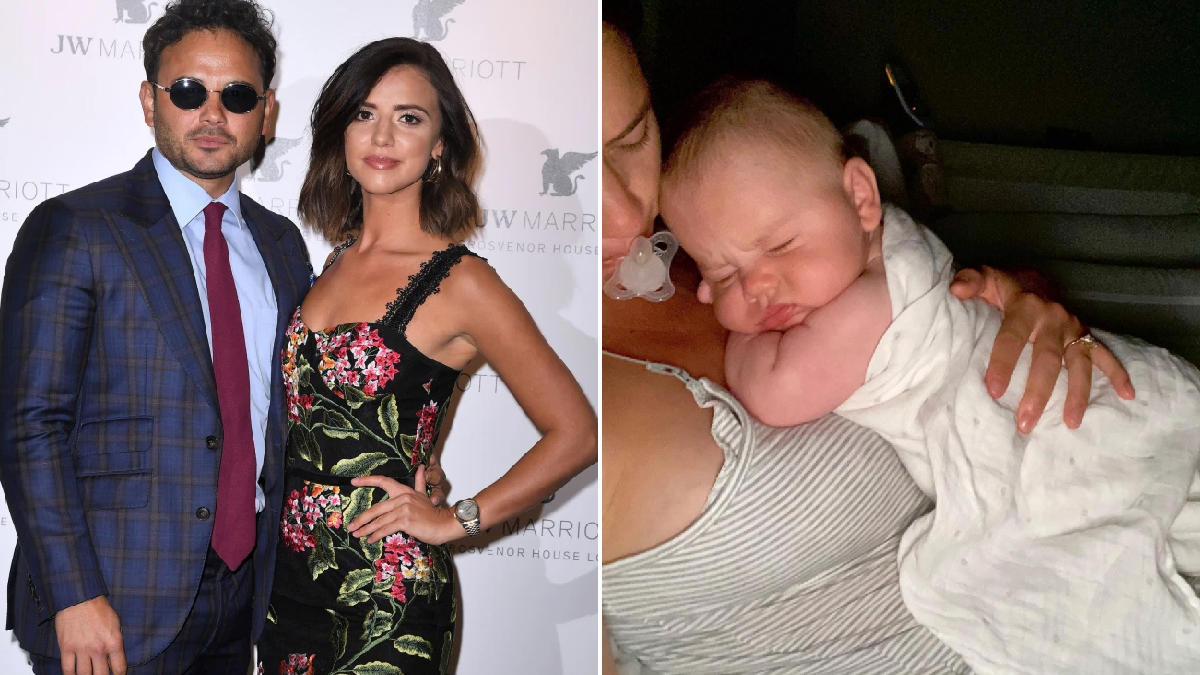 Lucy Mecklenburgh has opened up about the terrifying experience of rushing her baby son Roman to the doctor after he choked on an apple.

The former Towie star’s son is okay and managed to bring up the food by himself, but spent two hours ‘gagging’.

Writing on her Instagram Stories, Lucy told fans: ‘This morning Roman choked on a little piece of apple he managed to clear it himself but spent 2 hours gagging, being sick & bringing up thick saliva.

‘He’s not eaten breakfast & lunch he put in his mouth, gagged & spat it all out.’

Lucy went on to ask for fans’ advice, explaining that she was ‘worried he’s really hungry but scared to eat.’

She added: ‘We did go to the GP and he suggested a&e if he continues to refuse fluids but he has finally had a bottle of water & breast fed but just won’t eat solids.’

The 29-year-old explained in a video that she thought choking always meant the child would go completely silent and have blocked airways, which wasn’t the case with Roman.

‘It was scary and I am worried about how he’s gonna eat now because I put lunch in front of him, he had a little bit and he just gagged and spat it out,’ Lucy pointed out. ‘And he’s such an amazing eater. So I am a little bit concerned that he might be off his food.’

‘The main thing is he’s okay,’ she continued. ‘I’m hoping when he gets up from his nap that he’s back to his old, happy self.’

Lucy later showed videos of Roman finishing off a meal and giggling as they went for a walk, revealing that he was back to his smiley self, before posting a snap of him looking as cool as anything in sunglasses.

‘Such a scary morning with Roman choking but he’s absolutely fine thank god. I’ve just smothered him with kisses and cuddles all day 💛✨🙏🏼,’ she wrote.

Lucy and her fiance Ryan Thomas welcomed Roman in March last year, with the tot coming up to his first birthday.

She’s been super open about her experiences as a new mum, with the star recently forced to hit back at trolls calling her ‘irresponsible’ after she struggled with breastfeeding.

Opening up to Results Wellness Lifestyle magazine, Lucy said: ‘I’ve climbed a mountain, cycled part of the Tour de France, survived 30 days on a deserted island, but breastfeeding and being a new mum has been the hardest and most rewarding thing I’ve ever done.’

She explained how she used to brush off social media trolling but changed her approach when her parenting came under attack.

‘I’ve had people call me an “irresponsible mum” or “disgusting” for breastfeeding in public,’ Lucy revealed.

‘It’s constant and I just can’t help but respond. I’ll write back and say “Do you eat pizza in the toilet of the restaurant? No? Then why should my baby”.

‘The attitude towards breastfeeding in the UK needs to change.’

MORE : Lucy Mecklenburgh fires back at body-shaming trolls who claim her body ‘isn’t realistic’ 10 months after birth of son Roman

MORE : Lucy Mecklenburgh hits back at trolls calling her ‘irresponsible’ mother as she breastfeeds baby Roman

BTS Army springs into action and calls for investigation as band’s TikTok account is...

‘The Bachelor’: Serena P. on Why It Was ‘Difficult to Learn’ About Rachael’s Controversy...

Emilia Clarke told by facialist she needed fillers at height of Game Of Thrones...