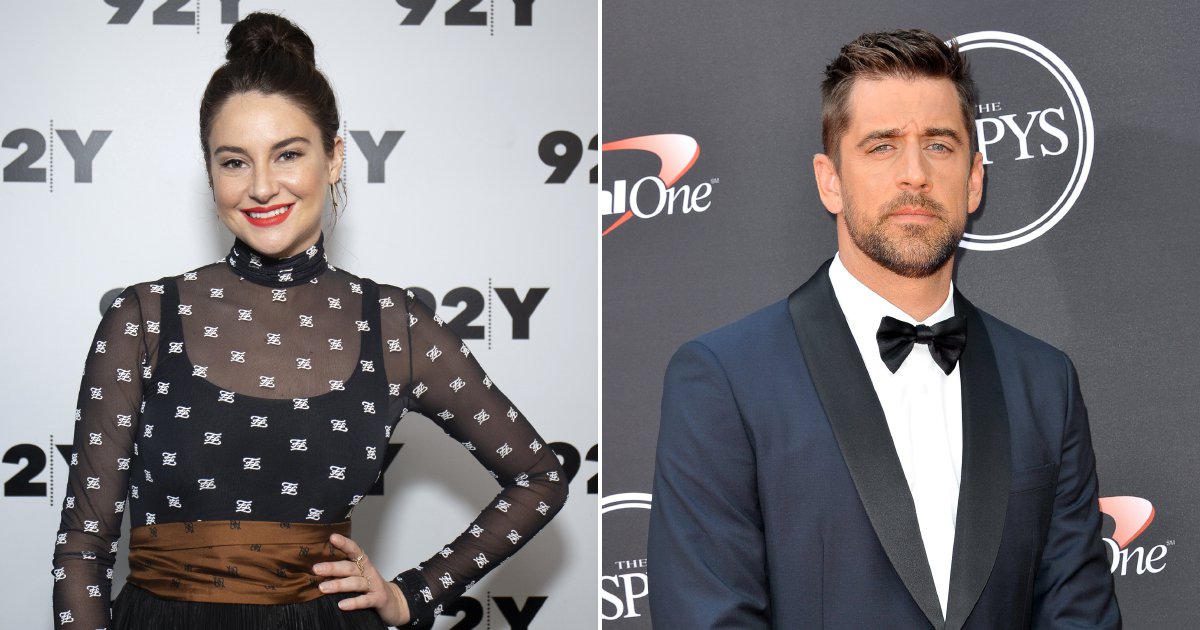 The pair left us stunned earlier this month when just days after their relationship was rumoured, Aaron, 37, shouted out his fiancée while accepting the NFL Most Valuable Player award.

Now, Shailene, 29, has confirmed that their engagement actually happened a while ago, and we were all just in the dark about it.

The Big Little Lies star appeared on The Tonight Show with Jimmy Fallon, with the host asking: ‘I keep reading that you are engaged to football great Aaron Rodgers. Is that true, are congratulations in order?’

Shailene said: ‘I’ve been reading that too, it’s kind of funny.

‘Yes, we are engaged. But for us, it’s not new news, you know, so it’s kind of funny. Everybody right now is freaking out over it and we’re like, yeah, we’ve been engaged for a while.

‘We got engaged a while ago. He’s a wonderful, incredible human being. But I never thought I’d be engaged to somebody who threw balls for a living. Like, I never thought as a little girl “when I grow up, I’m gonna marry someone who throws balls! Yeah!” But he’s really just so good at it.’

The actress joked that her dog was really chuffed about getting to run ‘marathons’ playing catch with her husband-to-be, but admitted that she was hardly a sports fanatic – and had never watched a full game of football before meeting Aaron.

She said: ‘We met during this wacky, wacky time and all the stadiums were closed that he was playing in, so I have yet to go to a football game.

’I didn’t really grow up with sports, especially American sports. It was never really on my radar. When we met, also, I knew he was a football guy, but I didn’t know like what kind of a football guy he was. And I’m still constantly learning.

‘I don’t get it. He’s good. He’s great. But, like, I don’t understand. ‘Cause I don’t know him as a football guy. I know him as, like, the nerd who wants to host Jeopardy! That’s the dude I know. He just happens to also be very good at sports.’

While Shailene isn’t that into sports, she previously dated Australian-Fijian rugby union star Ben Volavola, 30, but she confirmed their split in April 2020 after two years of dating.

It is unclear when Shailene met Aaron, but the Green Bay Packers quarterback split from race car driver Danica Patrick in July 2020 after two years together.

While sources initially suspected that his romance with Shailene was a rebound, others said that it was ‘no surprise’ that the athlete popped the question.

An insider told People: ‘They are very happy together. It’s not surprising he proposed so fast. When you know, you know, right?’

Aaron – who also previously dated Olivia Munn – is considered to be one of the greatest quarterbacks ever, and won his third MVP title this year.

Shailene is best known for her roles in the Divergent series as Beatrice ‘Tris’ Prior, The Fault In Our Stars and Big Little Lies, for which she received Golden Globe and Emmy nominations.

WandaVision episode 6: Did you catch the sneaky reference to Evan Peters and Aaron...