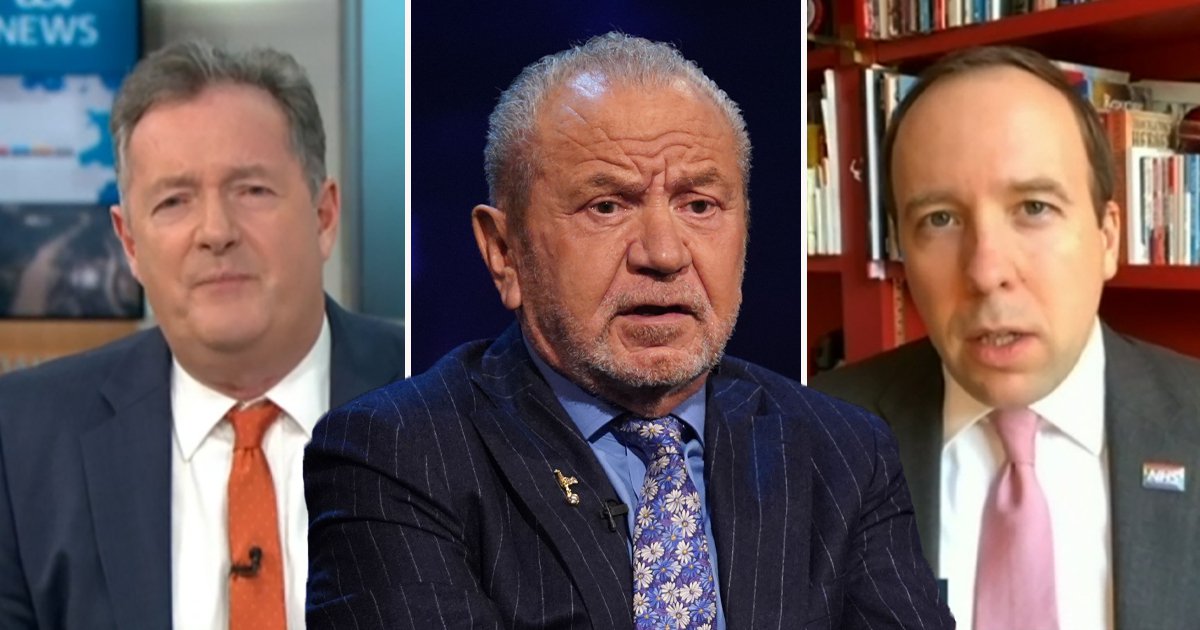 Lord Alan Sugar has been trolled by his followers after seemingly confusing Matt Hancock with comedian Nick Hancock while starting a spat with Piers Morgan.

Despite the Heath Secretary being at the fore of the news daily, The Apprentice star still hasn’t got his name right.

During today’s instalment of the ITV programme, Mr Hancock – who was also tormented by a very well-timed blunder – felt the wrath of Morgan and his co-host Susanna Reid after being found to have broken the law by failing to publish details of billions of pounds’ worth of coronavirus-related contracts – which he refused to apologise for.

Mr Hancock said he was ‘exasperated’ by Morgan’s line of questioning and instead thought he should be on the show to praise his team for working so hard during the pandemic.

Morgan noted that the UK currently has the largest death toll from coronavirus in Europe, and would not be thanking anyone for such a grim milestone.

Watching on from home was Morgan’s regular sparring partner Lord Sugar who called the Good Morning Britain host a ‘p***k’ and Mr Hancock, Nick Hancock for reasons which are yet to be clear.

‘Why does Nick Hancock go on @gmb he is just cannon fodder from that spiteful p***k Piers Morgan,’ the Amstrad mogul tweeted.

Naturally, fans were quick to pick up on the blunder and the entrepreneur didn’t take to the backlash lightly:

Former friends Morgan and Lord Sugar famously fell out over the government’s response to the coronavirus pandemic. Following several public slanging matches, Sugar said their friendship was irreparable and compared Morgan to Hitler.

Backstage With… the Golden Globe nominee who prayed to get out of Billie Holiday...