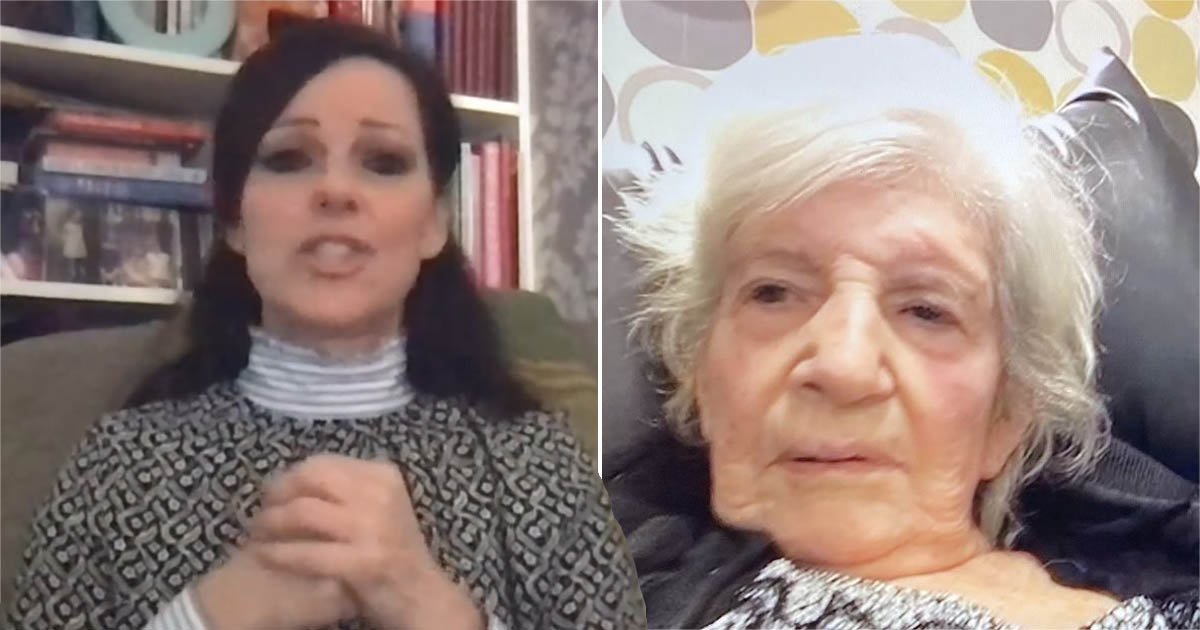 I’m A Celebrity star Ruthie Henshall broke down in tears on today’s Loose Women when she spoke about the difficulties of not being able to see her mother in a care home, stressing: ‘They have no voice.’

Earlier this month, Loose Women presenter Ruth Langsford became emotional on the ITV talk show when she opened up about being unable to physically be with her mother, who is a resident in a care home.

The panel discussed a campaign set up by West End star Ruthie, who desperately wants to visit her mother in the hope that she can be there for her as her health deteriorates.

On today’s show, Ruthie was interviewed via video chat about the struggles she is facing, explaining that the last time she saw her mother Gloria was in October, before she entered the I’m A Celebrity castle.

‘Then they brought in the rule of not being able to have more than one person go and see her behind a screen and that had to be the same person each time,’ she recollected.

‘Because I was going away into the castle and my other sister works as a teaching assistant, it fell to my other sister to be the one who went in. I haven’t been able to see her.

‘They’ve moved her into a front room and I’ve been able to stand at the window and wave. But I’m shocked, just absolutely shocked and devastated by the shell of a woman that I see.’

While Ruthie has applied to become a volunteer carer so that she can see her mother, who has dementia, she said that she has been told that she’s still not allowed to visit.

‘They have given advice [guidance] again that care homes can open, it is not a law, so it means that each care home can have their own rules. I was told yesterday; your guess is as good as mine,’ she stated.

Ruthie told the panel that her mother has had the vaccine, adding: ‘If you’ve got a lateral flow test, PPE and the temperature check, the risk is so minimal compared with the risk of these people dying.’

The actor then became choked up, while Ruth – who was listening tentatively – also began to become teary.

‘I can’t work out what the government are saying half the time. I think in years to come, we will look back at all these people in care homes, who can’t see their loved ones and they’ve gone downhill and we’ll think, how did we let this happen? It’s not just care homes, but they have no voice.’

Ruthie is hoping that the Rights for Residents campaign will allow two essential family carers to visit their loved ones for two hours a week, her aspiration being that a new law ‘enshrines our rights as family carers’.

‘You are going to find that the care sector is going to be decimated by this. People are choosing not to put their loved ones in care homes as they don’t know if they’ll be able to see them or not. It’s going to have such a knock-on effect,’ she said.

Several Loose Women viewers expressed their support towards Ruthie, whose mother was a drama and an English teacher.

‘Watching @loosewomen Made me teary to see @RuthieHenshall get emotional… proud of what you are doing Ruthie!’ one person tweeted.

‘This discussion is really breaking my heart. I can understand and share the frustration. No one should be kept away from their loved ones. My heart goes out to anyone who go through this. I feel for both Ruthie and Ruth, it’s so heartbreaking,’ another person said.

How England will leave lockdown

Stacey Solomon cracks up realising she drew eyebrows on wonky for a day of...