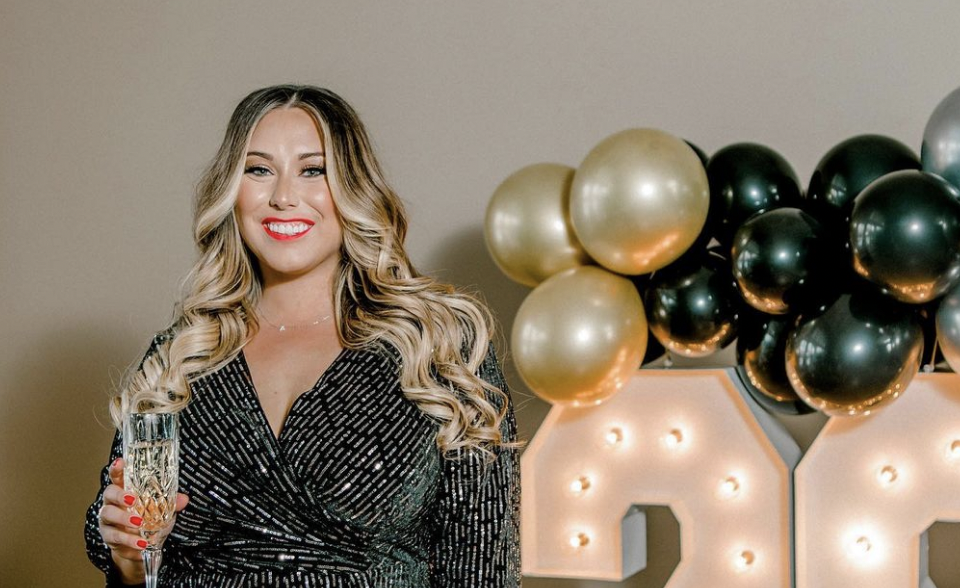 Eminem’s adopted daughter Alaina Scott had a celebratory message of self-love to share as she marked turning 28 years old.

Celebrating her birthday, she declared that she was ‘feeling blessed and lucky to be here’, while ringing in her special day with cake and champagne.

Eminem adopted Alaina in the mid-2000s. She is the daughter of Eminem’s ex-wife Kimberly Ann Scott’s sister Dawn.

All dressed up in a glittery wrap dress and posing by a huge 28 sign and balloons, Alaina told her followers that her road to loving herself hasn’t been easy, but she’s finally feeling like she’s got there.

She wrote: ‘There’s no denying birthdays are my favourite. Yours, mine, everyone’s – I love a good reason to celebrate. 🍾

‘Turning 28 today and I can’t help but love the person I am. It wasn’t always like this and it took a lot of work in therapy to get to this point but damn does it feel good. Feeling really blessed and lucky to be here. Ready for everything this year has in store for me❤️’

Dawn – Alaina’s biological mother – died in January 2016 and had battled a drug addiction, with Eminem and ex-wife Kim stepping in to care for Alaina.

‘I was always there for Hailie, and my niece has been a part of my life ever since she was born. Me and Kim pretty much had her, she’d live with us wherever we were at,’ the rapper told Rolling Stone in 2004.

As well as a dad to Alaina, Eminem has daughter Hailie, 22, he shares with Kim and also adopted daughter Whitney – Kim’s daughter from a previous relationship.

Fans will have heard Eminem referring to his three girls in some of his hits.

While Hailie, who is now seen on Instagram and TikTok, features in around 22 of her famous dad’s tracks, Alaina is mentioned in Eminem’s song Mockingbird, where he calls her Lainie.

Lyrics include: ‘And you and Lainie were too young to understand it / Papa was a rolling stone, Momma developed a habit / To see how much you both have grown, it’s almost like you’re sisters now / Wow, guess you pretty much are, and Daddy’s still here / Lainie, I’m talking to you too, Daddy’s still here.’

At the time, he vowed never to marry again, but later reconciled with Kim and the pair remarried in 2006 – before Eminem filed for divorce again months later.

Reverend Richard Coles in trouble with the church after Have I Got News For...

Carol Klein: ‘Gardening has been a solace for so many during the pandemic’