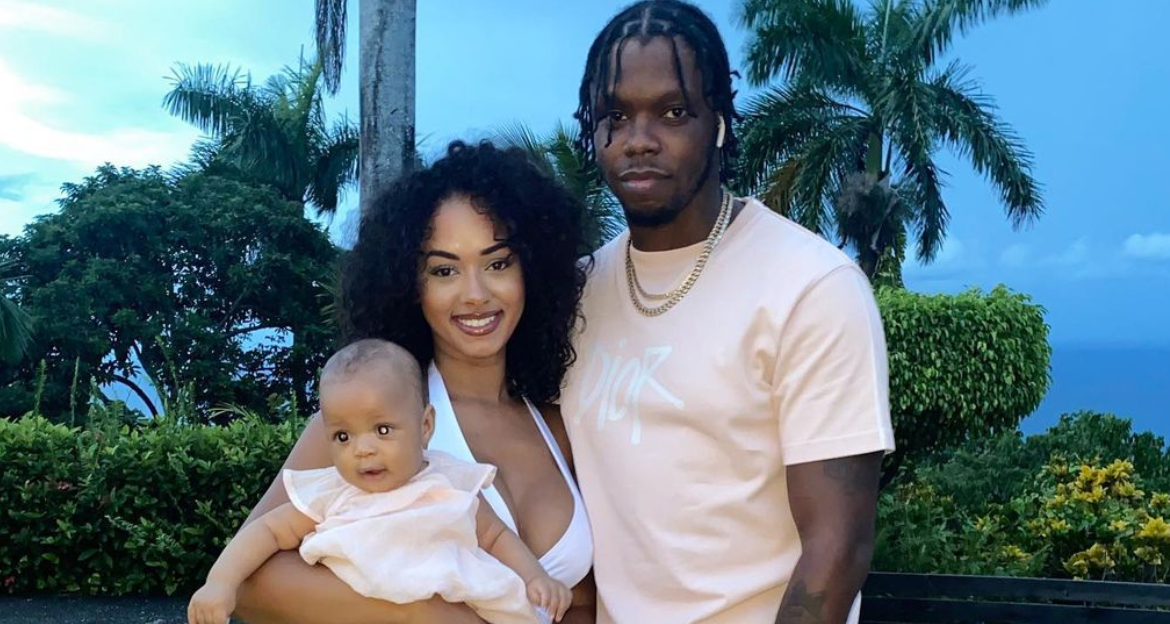 Krept has announced the devastating news of his split from long-time girlfriend Sasha Ellese, and fans have declared that love is officially dead.

The Krept & Konan rapper shocked followers on Monday when he revealed their break-up on Twitter, becoming the UK’s number one trending topic above anything Boris Johnson or coronavirus related on the social media site.

Krept, 31, tweeted: ‘We feel like we was so public with you guys we thought we should let u guys know. But me and sash have been friends for a while now and amazing co parents to nals. Alot changed during lockdown and since having nals and we just became good friends. But we are all good etc.

‘(Ps i feel like peoples assumptions would be that i did something lol no) but yeah we been friends for a minute and its still love & good vibes, even celebrated valentines etc but we are only friends. We just felt we had to do this in private and give it time before we told u [sic].’

Sasha, 25, has not directly commented on the split but she did repost Krept’s tweets on Instagram with a heart emoji.

His post included a sweet photo of them giving each other fist bumps proving they’re still on great terms.

In her short eight months, little Nala has become one of the most popular babies on the ‘gram and she became a trending Twitter topic on her own.

Reacting to the news, one fan tweeted: ‘You’d think Krept n Sasha are my mates. Why did my heart drop.’

‘Someone said they’re willing to pay relationship counselling fees for krept and sasha,’ another weighed in.

Another fan noted: ‘The Krept and Sasha situation (as sad as it may be) is a perfect reason why you lot shouldn’t be idolising celeb relationships with way you do. You have no idea what’s going on behind the scenes.’

One of Nala’s many internet aunties joked: ‘Krept and sasha broke up but nala is trending? The power she holds.’

Krept, real name Casyo Johnson, began dating Sasha a few years ago and announced that they were expecting their first child at his 30th birthday party last February.

Alongside a photo of him and Sasha cradling her baby bump, Krept said in an Instagram post: ‘Today im celebrating life, not only 30 years of mine but also my baby girl who will be here in 4 months. I thought today is the best day to let you guys know as I celebrate my 30th.

‘I’m feeling truly blessed to start this new chapter in my life with @sashaellese Im going to be a father, And the best father at that.

‘Thankyou @childsplayclothing for helping me put this all together. What a beautiful gender reveal ive been dying to know if it was a boy or a girl. And now i know im having a lil princess im so happy, all praise to God thankyou.’

Announcing Nala’s arrival, the Freak of the Week rapper wrote in a heartfelt post: ‘I cant even explain the feeling but its the best feeling in the world.

‘Watching sasha go through all that pain I fell in love with her all over again x10 so proud of her. Thanks for all the support and prayers throughout the pregnancy. My daughter is healthy, happy and beautiful ❤️❤️’.

MORE : Piers Morgan accused of ‘bullying and harassment’ in open letter to ITV from hundreds of freelancers

Amanda Seyfried Is a Coral Queen at 2021 Golden Globes