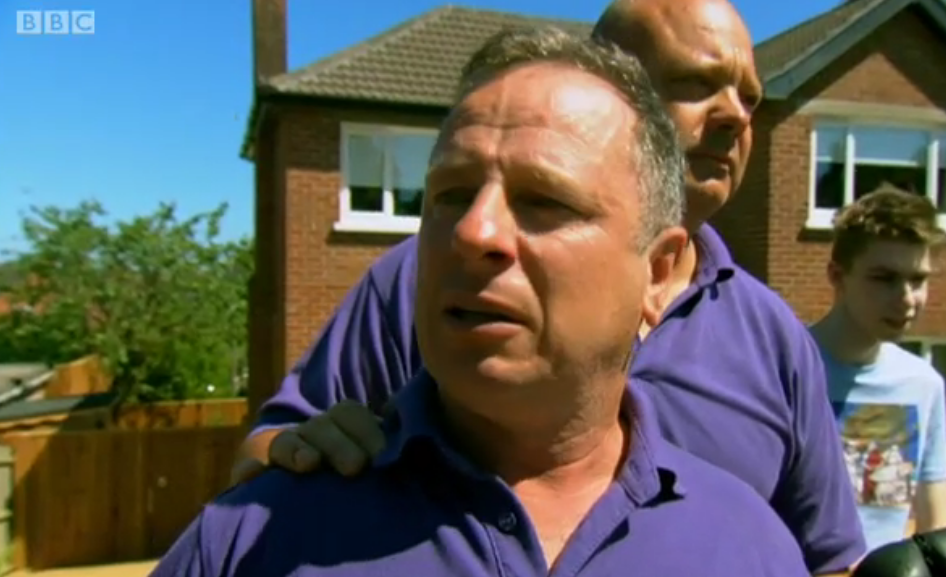 DIY SOS star Mark Millar was close to tears making a speech to all the volunteers who helped transform a house in just nine days in Northern Ireland in tonight’s episode.

Nick Knowles and the team headed to Bangor in Co Down to help Mandy McCreight, who was missing out on family life due to being confined indoors due to a variety of medical issues, and her children who also have mobility problems.

After wrapping up the project, build manager Mark, who was raised in the town, stood up in front of the crew and delivered an emotional address.

‘I’m going to struggle to get through this,’ he warned, before making his speech.

‘I left here 34/35 years ago with not a lot of hope,’ he continued. ‘But yous have all got into my heart and what yous have done, what yous have produced, the pride, the love that you brought to this build has been absolutely incredible.’

DIY SOS co-star Julian Perryman placed a comforting hand on Mark’s shoulder as he continued: ‘I think I’m the proudest man standing here today, so thank you to every single one of yous.

Mandy’s home was unsuitable for her needs and kept her mostly upstairs except when she had to go to hospital.

The mum has Ehlers-Danlos Syndrome that affects the body’s connective tissue, as well as a number of other health conditions that affect her heart and digestive system.

Besides Mark, viewers were also in tears over tonight’s episode and were in awe of the army of volunteers and their efforts.

‘So emotional watching #diysos tonight,’ wrote one. ‘The generosity of the trades people all coming together to do what they did in just 9 days blows my mind.

‘Nice to NI getting praised too, well deserved everyone involved and hope the family are enjoying their new home.’

Echoing a similar sentiment, another added: ‘Think that’s the most emotional I’ve been watching an episode of @DIYSOS. The big build. Was sobbing my heart out at the end. Total life-changing rebuild.’

DIY SOS continues on Monday at 9pm on BBC One.

Modern villa in Agarone with pool & customizable layout for sale