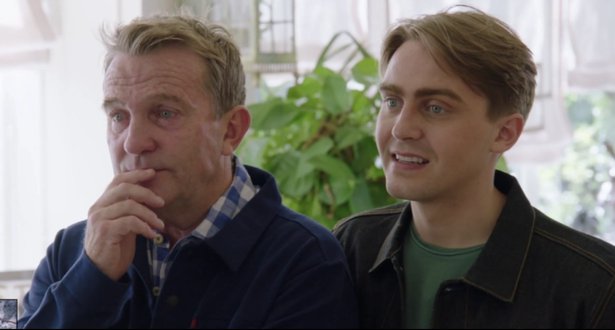 Bradley Walsh revealed he hit his head and fell while filming for his ITV show Breaking Dad.

During the latest series of Bradley & Barney Walsh: Breaking Bad, the duo went to Italy as part of their road trip.

Each week, the show has seen Bradley and his son taking on some death-defying and dangerous challenges – including bungee jumps and leaping off a 30ft cliff ledge.

However, this wasn’t how Bradley injured his head, it was in fact when he and Barney went clog dancing.

The 60-year-old ended up hitting his head on a wooden menu when trying to dance.

He told The Sun: ‘After being thrown out of a plane, climbing up a wall and being thrown off a bull and everything like that, I trip up like an old twerp and whack my head on the menu.’

In the latest episode of the programme, the presenter overcame his fear of heights after jumping off a 30ft cliff into the sea.

After receiving some diving training, the 60-year-old and his son Barney climbed up a cliff face and prepared to jump.

‘I landed on my gluteus maximus, it’s absolutely slapped my a***! Ah, my a*** is on fire,’ Bradley said after the jump.

Earlier in the series, Bradley struggled to hold back the tears after his son surprised him with the best birthday gift – a surprise Andrea Bocelli performance.