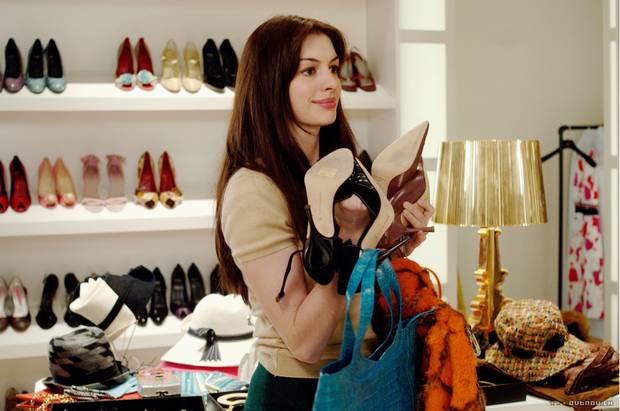 Andy Sachs in The Devil Wears Prada is one of Anne Hathaway’s most famous roles – but it turns out many other actresses were in line to play the assistant before Anne.

The 38-year-old was apparently the ninth actress in line for the role in the 2006 comedy-drama, which marked her first leading role in a film marketed towards adults.

Anne appeared on the latest episode of RuPaul’s Drag Race to speak to the queens, and was asked by Rosé if there were any roles she had to ‘fight tooth and nail for’.

The Oscar winner said: ‘How much time do you have?

‘I will give you some tea – I was the ninth choice for Devil Wears Prada. But I got it! Hang in there, never give up.’

Rachel McAdams had been offered the role of Andy but repeatedly turned it down, later telling Elle: ‘I’m not going to make movies just to make movies. I have to be passionate about it.’

The star even traced the words ‘hire me’ in the sane of a zen garden on executive producer Carla Hacken’s desk after meeting her.

Anne later told Variety: ‘I had to be patient. I wasn’t the first choice.’

At the time, Anne had fronted kids and teen movies like The Princess Diaries and Ella Enchanted, but had yet to be the main face on an adult-aimed movie.

Luckily, those other eight actresses didn’t get the part and Anne landed the role of an aspiring journalist who takes a job as an assistant to a feared fashion editor named Miranda Priestley, played by Meryl Streep.

The Devil Wears Prada became a huge hit, grossing $300 million (£214m) against a $41 million (£29m) budget and earning critical acclaim, including an Oscar nomination for Meryl.

It also made bonafide stars out of Anne and Emily Blunt, who played Andy’s colleague Emily, with both actresses going on to front major box office successes.

After The Devils Wears Prada, Anne starred in Bride Wars, The Dark Knight Rises, Interstellar, The Hustle and Les Misérables, for which she won the best supporting actress Oscar for her role as Fantine.

Most recently, she starred in Locked Down, a comedy heist film set during the Covid-19 pandemic.

However, as well as filming the pandemic film with Chiwetel Ejiofor, Anne has also been busy parenting her two children with husband Adam Shulman during lockdown.

She told Stellar: ‘You know, I’m always hesitant to frame things in the realms of challenges because I think it sets a tone. As a mum, I’ve found tons of opportunities. There’s obviously a learning curve.

‘You just have to be kind to yourself with that, because you do feel like you’re doing everything wrong, especially in the early days.’

MORE : Kim Kardashian steps out ahead of Kanye West divorce bombshell as she runs errands in LA

Alexandra Burke tears up as she recalls mum dying in her arms and shares...

what eating disorders are and who they affect