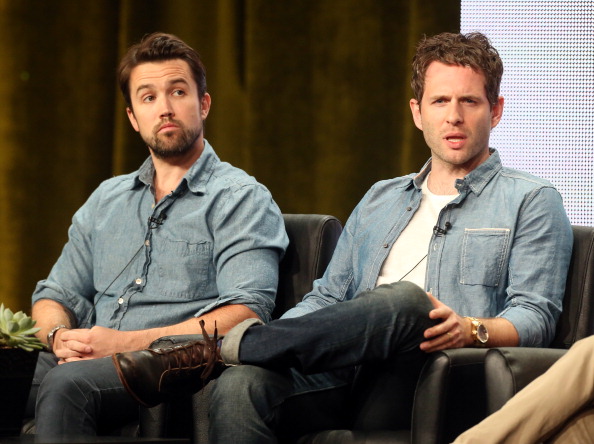 It’s Always Sunny In Philadelphia star Glenn Howerton is baffled by his co-star Rob McElhenney buying Wrexham AFC – because he doesn’t think he even likes football.

The Hollywood takeover was completed earlier this month, with Ryan, 44, and Rob, 43, investing £2 million into the club.

It seems the business venture was as much as a surprise to Rob’s friends as it was to us, as Glenn, 44, seemed bewildered by the purchase.

Speaking to the Guardian, the actor, who plays Dennis in It’s Always Sunny, said: ‘What the hell is that all about? He’s been scrambling to finish [his Apple TV+ comedy] Mythic Quest, so I haven’t spoken to him.

‘I don’t know what the hell that’s all about. He’s not even a soccer fan.’

Glenn, who developed the sitcom alongside Rob, continued: ‘Well, it’s entirely possible that he was watching soccer and I didn’t know about it.

‘I mean, to Rob’s credit, if he’s diving into this, he’s going to go at it full steam. I’ve never known that guy to half-ass a single thing in his life. If anything, he pushes himself so f***ing hard I worry about his health sometimes.’

It seems that the actor – who plays Mac on It’s Always Sunny – is taking his new role pretty seriously, having changed his name to Wrob on his socials, something he is ‘apparently legally obligated to do as I’ve been informed Ryan now owns my life rights’.

After the paperwork went through on their purchase of Wrexham, Rob and Ryan said in a joint statement: ‘It is a special day for the two of us to become the latest stewards in the long and storied history of Wrexham AFC.

‘Together with the players, the staff, the fans, and the local community, we can now pursue our goal to grow the team and return it to the EFL in front of increased attendances, and in an improved stadium, while making a positive difference to the wider community in Wrexham.

‘Wrexham AFC is only in a position to thrive because of the incredible efforts of the Wrexham Supporters Trust.  Their members are a fitting reflection of the integrity and spirit of the town and they will always have an important role at the club.’

Since the sale went through, the actors have celebrated Wrexham remaining undefeated under their ownership, after the team beat Woking 2-0 on Tuesday.

Outside of owning a football club in Wales, Rob will be sticking to the day job, as It’s Always Sunny has been commissioned for four more seasons.

The comedy, which also stars Danny DeVito, Charlie Day and Rob’s wife Kaitlin Olson, is already the longest running live-action comedy series in US TV history, with the additional four seasons set to bring it up to season 18.

He has also written a second season of Mythic Quest: Raven’s Banquet for Apple TV+.

MORE : Loose Women’s Charlene White once ‘spent a weekend with Destiny’s Child’ after a night out

MORE : Who should follow in Hugh Grant’s footsteps as Paddington 3 villain? From Dame Emma Thompson to Daniel Radcliffe

Games Inbox: JRPGs in the next generation, best Xbox One exclusives, and Uncharted: The Movie

WandaVision finale: What is the Darkhold mentioned by Agatha Harkness? Book of the Damned explained

Celebrity Best Home Cook: Who are the finalists?

Why it’s good for you to be sad