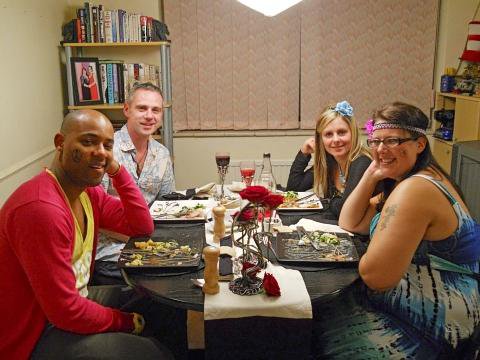 Come Dine With Me has created some truly iconic (and cringe-worthy) TV moments over the years, including when sore loser Peter said his ‘dear god, what a sad little life, Jane’ rant.

Unruly diners having too much to drink and striking up awkward conversations across the dinner table is the norm.

But how much of the Channel 4 reality show is staged?

Dave Lamb, who narrated the show, has previously revealed he isn’t ‘in control of the whole narrative’ but is ‘allowed to improvise around the script’ with the voice over coming at the end of production.

‘The VO is the very last bit of the show that’s done. They cut the show, after they film for hours with these people,’ Lamb told VICE.

Lamb also suggested the show’s producers can pick and choose which contestant they choose to make the ‘villain’.

‘If the story is that the show’s taken [a position] against one of the contestants, and if I happen to like that contestant, there’s nothing I can do about that,’ he added.

‘I can’t change the story of the show. But what I can do – which gives me artistic satisfaction, I suppose – is tweak the lines and way of saying it, and add new lines.

‘That’s what keeps me interested. It can be a bit frustrating at the time if you quite like someone that the show has decided is the villain.’

Behind the scenes of Come Dine With Me

Previous contestants of the show have revealed some of the secrets of what goes on behind the scenes, including a ten-stage application process.

Benjy Potter, who appeared on the show last year claimed contestants meet with the director to discuss their theme before filming begins.

‘First up, contestants have a meeting with a director to discuss their theme — and check it is not too risqué,’ he told The Sun.

‘Next, show bosses handed me £125 to spend on food and drink for my four guests.

‘Contestants don’t get paid for the week’s filming so the cash for my night is all I have.’

He also revealed filming for one evening’s dinner could take up to eight hours at times and as a result crew of the show advised them to ‘hold some stuff back’ in case they ran out of conversation.

As for finding items around the house that then provoke conversation between contestants, Potter claimed specific items would be ‘planted’ by the crew.

And what about the taxi at the end when contestants mark their evening out of 10?

‘The car is actually hired to do a few laps of the local roads while you give your scores — then contestants are turfed out at the host’s house and travel home in a much less glamorous minicab,’ added Potter.

Come Dine With Me airs on weekday mornings on Channel 4.

MORE : Worst Come Dine with Me contestant EVER

MORE : How can I apply to be on Come Dine with Me?

The Significant Reason Why Meghan Markle And Prince Harry Announced Their Pregnancy On Valentine’s...