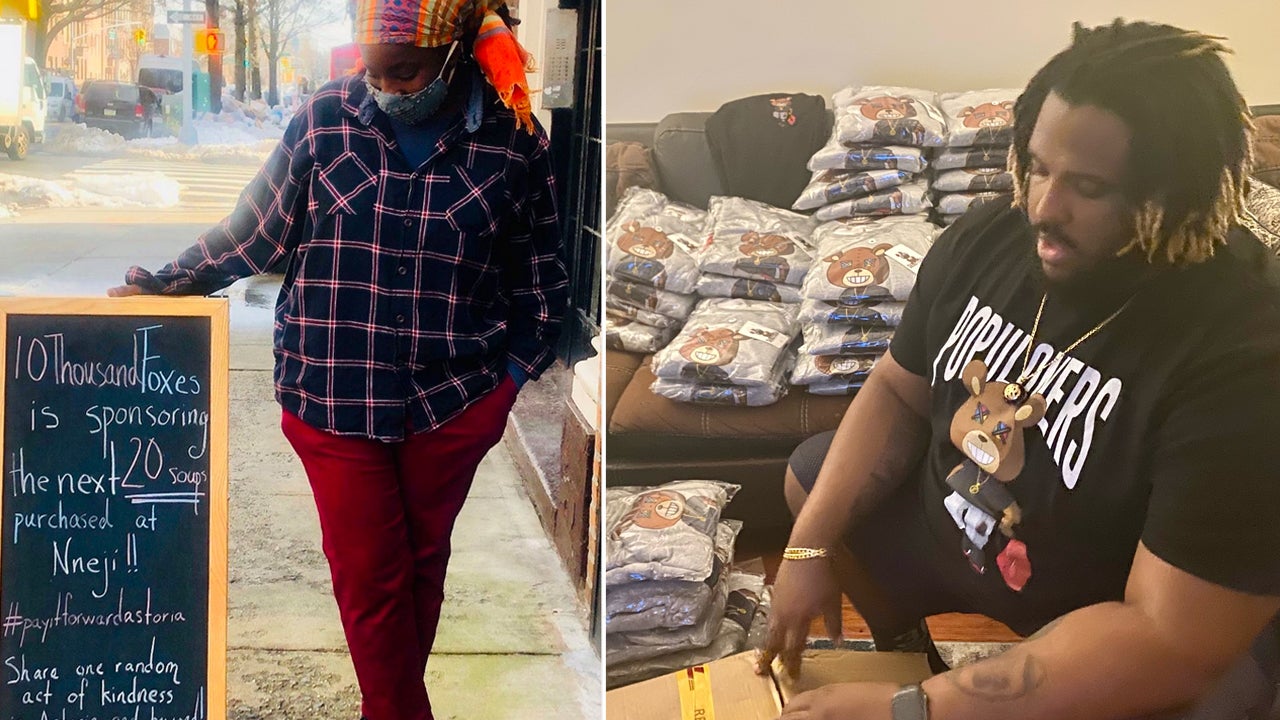 As businesses struggled to keep their doors open during the coronavirus pandemic, some just put the key in the door and never looked back. Others, however, found opportunities during the global crisis to try and launch their dreams.

The plight of Black-owned businesses in America has been highlighted following decades of national protests calling for sweeping social justice reform.

Yet, with the stakes stacked high, some Black-owned businesses started in a trial by fire and have so far seen their perseverance pay off.

Populoners Apparel, a clothing company based out of New York City, was launched in summer 2020 after its owner, Brad Roach, decided to take a chance on himself and post a design he and a friend crafted on some renderings of clothes. Much to his surprise, the response was overwhelmingly positive.

Roach did not want big labels to get his money any longer and told Inside Edition Digital he “decided that the whole 2020, I was only going to wear small business brands or something of my own.”

He took inspiration from the artwork of Kanye West’s first three albums, which featured a bear logo, and customized that to fit his own personal style and taste. The result, he thought, would make for very cool streetwear.

“I put [the logo] online, and it was like, ‘yo, what do you all think about this?’ People started ordering,” he said. “I was doing it as a joke, even though I paid for the logo… I looked over at my mom, my wife, and my brother, and I’m like, ‘Yo, I don’t have no clothes, for real.'”

With financial help from his mother, Roach began working with suppliers and quickly launched an online store that features T-shirts, sweatshirts, socks, pins, hats and backpacks. He is learning as he goes, but so far, he said, it has “felt effortless.”

“That’s why, even to this day, I’m shocked that it is what it is, that people support it, people like it. I don’t feel like I’ve put in as much work as I should to have the quick success that I’ve had,” he said.

Another New York City business, Nneji, based in the food-loving Astoria neighborhood of Queens, opened its doors in early summer 2020. The restaurant serves up West African dishes that owner Beatrice Ajaero grew up eating, such as egusi, spinach and okra stew, yassa, and red stew. She also sells other popular items from the continent such as the South African snack biltong, black soap, powdered milk, and West African textile goods made by her mother. Nneji also represents the Mediterranean influence by selling pastries from a local Italian bakery and olive oil from the region.

“I found that they were these items that cut across a lot of cultures, oils, spices and teas,” she told Inside Edition Digital.

After many years serving up her dishes inside a venue space on Roosevelt Island, Ajaero opened her own brick-and-mortar shop in Astoria. She said from the day she opened, everyone has been so supportive and people have come from New Jersey, Long Island and across the city to eat her food. Even in a pandemic, as people visited New York City from locales as far as Crete, Mexico or Los Angeles, they found out about her place and came for dishes, she said.

“I’m really honored to share [the food], and to share the heritage behind it and to link, particularly in this month, where we’re celebrating our ancestors here in America,” she said. ”So from the market, we then grew into our current presentation.”

For Ajaero, serving her food is not just a means to pay the bills. She is giving her history and heritage in every dish in a sliver of a city that has nearly every type of world cuisine in a few block radius.

“I tell a lot of people: food is not new to Astoria,” she explained. “In fact, it’s really required us to be on our toes, to be responsive, about ingredients about sourcing, because there’s so much food choice [in Astoria], and so much heritage and so everyone who comes to our door has very pressing questions about food in the tradition of appearing. And so for us, it’s made for great conversation.”

While many restaurants have struggled not just in New York City but nationwide to stay afloat due to the pandemic, Ajaero looked at this moment as a time to take the leap into her own business and inspire others. “If not in a pandemic then when?” she said.

While owning any business presents its everyday challenges, Roach and Ajaero both say that because they are doing all they can to not have to deal with financial institutions and self-financing, the typical issues Black business owners face so far has thankfully not been the case for them.

Black-owned businesses have long had an uphill battle in securing financing to get off the ground and running. A report from the Federal Reserve Bank of Atlanta showed that 31% of Black-owned businesses received the full amount of funding they requested in 2018. That same report, first reported on by the Los Angeles Times, noted that 49% of white-owned, 39% of Asian-owned and 35% of Latino-owned business applicants received approval for all the financing for which they applied.

For Brian Brooks, co-owner and CEO of E.E. Ward Moving & Storage based in Ohio, his business has a history that is part of the fabric of America. E.E. Ward is America’s oldest Black-owned business. The business’s longevity spans 14 decades and in 2021, they will be celebrating their 140th anniversary. Born out of the plight of the Civil War, its founder John T. Ward was a conductor on the Underground Railroad and the company was one of the first Black-owned businesses in the country. It was operated by the Ward family until 2000, until Brooks and his wife bought the business.

After being in business for so long, Brooks and the company have seen and heard it all and offered up wise words to Black entrepreneurs today.

“My advice would be, be patient, be smart,” he said. “Know who your customer is. Then, be focused, which is focused on delivering great service. That’s the E.E. Ward secret sauce…Eldon had a quote, one of his famous quotes was, ‘do what’s right, come what may.’ There’s a lot to be said about that.”

While success means different things to different people, for the entrepreneurs who spoke to Inside Edition Digital, that idea could not be more true.

For Roach, getting Populoners into shops like Vinnies in Brooklyn, which is a clothing mecca in the city, is a personal achievement. But when he can give back to the community is when he will know he made it.

“There is so much creativity in those underprivileged communities where they just don’t have the opportunity. So, seeing a face that looks like theirs, seeing someone that came from where they came from, it’s a little shove to go try out something different,” he said. “So, when you do stuff like that, community events, if you can help one person out of the 45, 60 people you see, it’s worth it.”

For Ajearo, it means honoring the legacy of the shoulders of giants she stands on while changing her community and their taste buds.

“It’s really just a continuation of all of the work done by my forebears here, and my forebears in West Africa,” she said. “And my hope that from actively working to achieve that contribution as someone who’s engaged civically, that the next generation will have something to hold on to is I have had something very, very big to hold on to previous generations have come before me.”

What keeps Brooks going is making sure that his employees can put food on their table, but also hearing from other Black entrepreneurs that see him as a North star. He often receives messages on LinkedIn from fellow Black business owners from across the country who want to share how his story has inspired them. Knowing he’s a role model and helping pave the way for others looking to create and give back fuels Brooks.

“That LinkedIn message, that means a lot to me when I see that kind of message from people. That gives me the juice,” he said. “There’s days you’re like, ‘man, this is a tough Monday or a tough day,’ but when you see stuff like that, it’s like, ‘Okay, I got to keep going for that guy. I got to keep going for Shawn in Boston because Shawn is looking at me.’”

These Black Inventors Changed the World and Everyday Lives

Black Children Aren’t Seeing Themselves in the Books They Read. This Mom Is Working to Change That.

Top gov advisor says don’t even book a foreign holiday for NEXT year –...

Hailey Bieber is ray of sunshine on cute stroll through Paris...