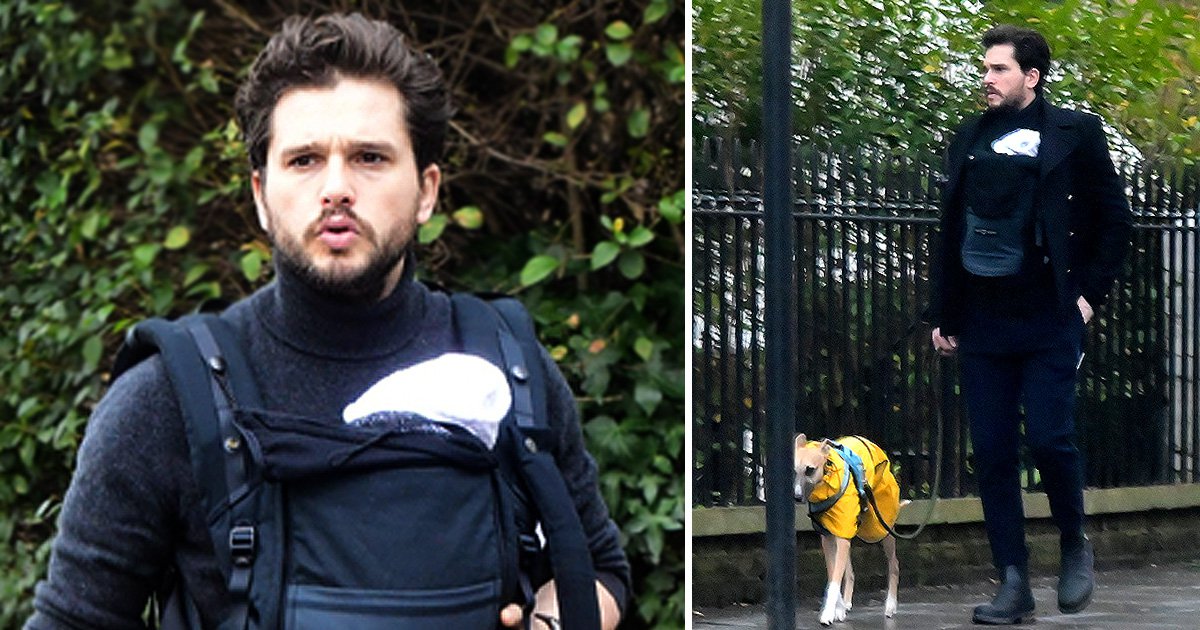 Game Of Thrones star Kit Harington has been pictured enjoying a stroll with his baby son and his pup after he and his wife Rose Leslie welcomed their son.

The couple recently confirmed their new arrival, with the Jon Snow actor getting stuck in with dad duties.

Kit, 34, was seen wandering near his London home, looking suave as he rocked a black jumper and blue jeans.

His and Rose’s pet dog, meanwhile, looked absolutely adorable in a bright yellow coat, keeping warm amid the freezing temperatures in the capital.

The couple, who met while filming the HBO fantasy series, recently confirmed the birth of their son, with Kit’s publicist adding to Metro.co.uk: ‘They are very, very happy!’.

Rose, 34, played Kit’s love interest, Ygritte, on the show, with the pair falling in love for real.

News of their pregnancy came in September after Rose revealed her baby bump in stunning photos for Make Magazine.

She revealed that they had decided to move back to England ahead of their new arrival. ‘What a glorious thing to be able to run to the countryside and recoup,’ she said.

‘It’s a great privilege to be surrounded by greenery, birdsong and hedgerows, and our delightful neighbours. It’s so peaceful.’

In 2018, the pair had a fairytale wedding at Wardhill Castle in Scotland, with Kit asking producers to shut down filming on the final series of Game Of Thrones so as the pair’s co-stars could attend.

He recalled: ‘I rang up [the producer] and I said, “I’m getting married and it’s your fault actually”… I think for the final season he is so stressed that he’s reached that peaceful level.

‘I was like, “You need to factor in a Game of Thrones wedding by the way.” They have all got to be there so the whole thing has got to shut down.’

While the pair have kept their relationship very private, Kit also previously opened up about falling in love while filming the series in Iceland.

He told Vogue Italia: ‘Because the country is beautiful, because the Northern Lights are magical, and because it was there that I fell in love.

‘If you’re already attracted to someone, and then they play your love interest in the show, it becomes very easy to fall in love.’

MORE : Kit Harington faces perils of wearing face mask with glasses and the struggle is real

One coronavirus vaccine dose up to 80% effective at warding off severe disease in...