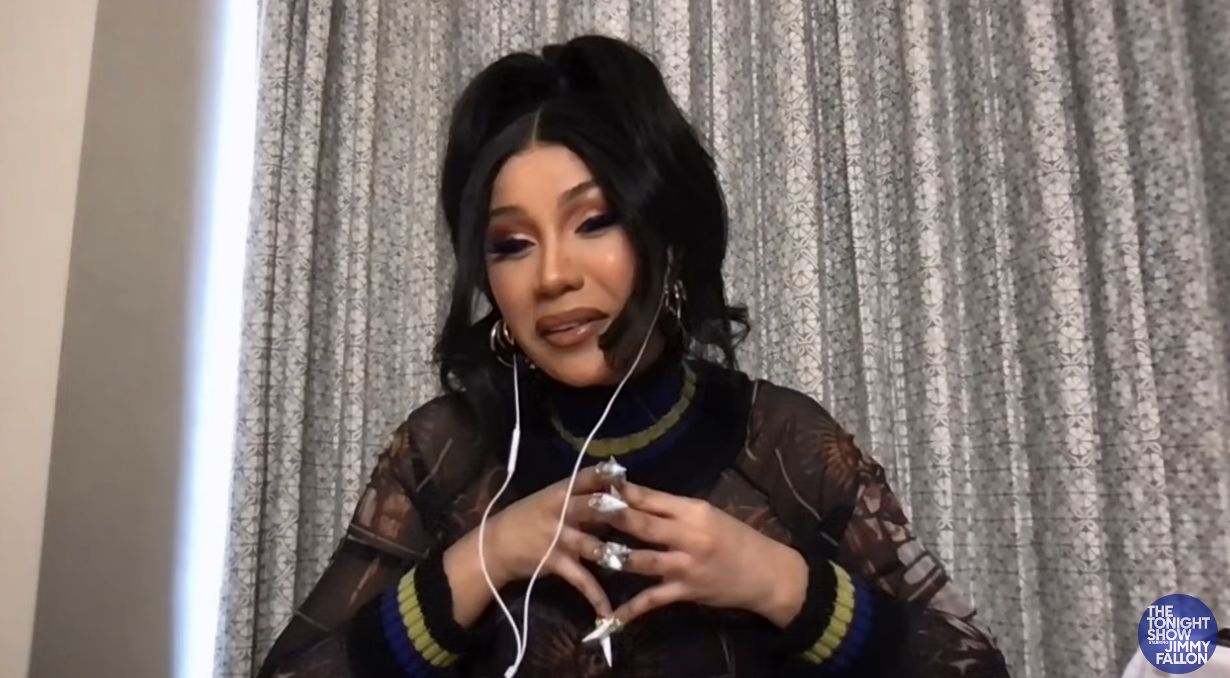 Ask Cardi B to explain the meaning behind her new song title Up, and she’ll come back at you with a metaphor all about poop – no kidding.

The Bodak Yellow rapper, 28, dropped second single Up from her upcoming second album at the beginning of February, with lines in the track repeating the saying: ‘If it’s up, then it’s stuck.’

Speaking on The Tonight Show with Jimmy Fallon, Cardi revealed that the saying is used a lot by her husband Offset and put it down to being a ‘down South’ thing.

When asked what it actually means by host Jimmy, Cardi had a rather bizarre explanation that involved poop and a lot of not-so great visuals that will leave you not only confused, but feeling slightly grossed out too.

‘So, have you ever taken a poop, right? And it’s just stuck and it won’t come out… yeah,’ Cardi told a baffled-looking Jimmy.

Taking a minute to process what he’d just heard, Jimmy said: ‘Wow. All right. I guess you can take from it whatever you want.’

He tried to offer up an alternative explanation, suggesting: ‘There’s other ways to, uh, you know look at it I guess. I was saying if it’s up, then it’s up here [gestures with hand] forever. Once you get up [whistles].’

When she wasn’t liking her track to being on the toilet, Cardi revealed that she’s been busy working on more songs and music videos for her upcoming album.

Asked if it’s been hard to do during coronavirus, Cardi reflected on the ‘crazy protocols’ that now come with making a music video.

‘Videos, yes of course because there’s certain things you can’t do,’ she said.

Speaking of the video she filmed for Up, Cardi explained: ‘I did this pyramid, right? I did this pyramid with some girls and we had to do it in less than 10 seconds because it was more than six people and due to Covid you can’t be touching – even though you get tested before the music three times.’

Cardi, who previously revealed she spends thousands on Covid-19 testing for herself and her team, continued: ‘You get tested the beginning of the week, the day before and the day of. That’s extra, the money, spending in production.’

Jimmy pointed out that she and the girls are also seen licking each other in the video and when asked how that was allowed – given they weren’t allowed to be touching.

Cardi was stumped and shrugged: ‘Yeah, we had to like beg. It’s the craziest protocols.’

MORE : Kate Winslet plays troubled detective on the hunt for a murderer in gripping Mare of Easttown trailer

‘Coming 2 America’ Is Streaming Now — How to Watch the Long-Awaited Sequel on...