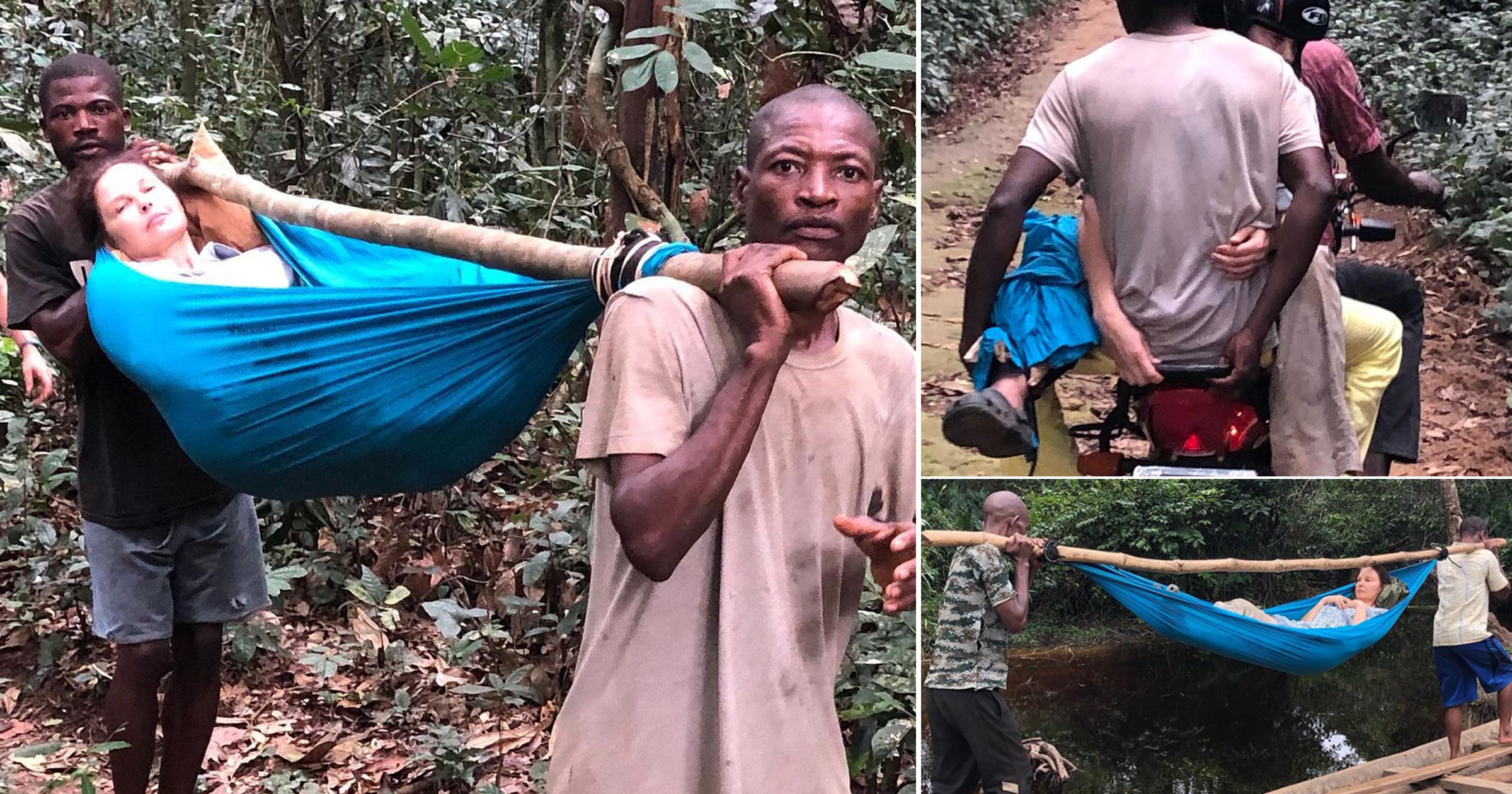 Ashley Judd has revealed the extent of her injuries after suffering a fall in the Democratic Republic of Congo, saying she could have lost her leg.

The 52-year-old suffered ‘catastrophic’ injuries when she tripped over a fallen tree, after a faulty lamp made it difficult for her to see during an outdoor excursion.

Ashley made a 55-hour journey to South Africa to have treatment on her broken leg, and she has now shared pictures form the ‘gruelling odyssey’ while thanking the locals who saved her leg.

The Kiss the Girls actress posted a picture of two men carrying her through the forest in a hammock fixed to a large branch, before she was transported on a bike, with a man holding up her leg.

Other photos showed Ashley lying on the ground with wood strapped to her shattered leg, and Congolese women comforting her.

The actress wrote: ‘Friends. Without my Congolese brothers and sisters, my internal bleeding would have likely killed me, and I would have lost my leg. I wake up weeping in gratitude, deeply moved by each person who contributed something life giving and spirit salving during my gruelling 55 hour odyssey. Here are some of their stories.

‘Dieumerci stretched out his leg and put it under my grossly misshapen left leg to try to keep it still. It was broken in four places and had nerve damage. Dieumerci (“Thanks be to God”) remained seated, without fidgeting or flinching, for 5 hours on the rain forest floor. He was with me in my primal pain. He was my witness.

‘Papa Jean: it took 5 hours, but eventually he found me, wretched and wild on the ground, and calmly assessed my broken leg. He told me what he had to do. I bit a stick. I held onto Maud. And Papa Jean, with certainty began to manipulate and adjust my broken bones back into something like a position I could be transported in, while I screamed and writhed. How he did that so methodically while I was like an animal is beyond me. He saved me. & he had to do this twice!

‘The six men who carefully moved me into the hammock with as little jostling as possible, who then walked for 3 hours over rough terrain carrying me out. Heros.

‘Didier and Maradona: Didier drove the motorbike. I sat facing backwards, his back my backrest. When I would begin to slump, to pass out, he would call to me to re-set my position to lean on him. Maradona rode on the very back of the motorbike, i faced him. He held my broken leg under the heel and I held the shattered top part together with my two hands. Together we did this for 6 hours on an irregular, rutted and pocked dirt road that has gullies for rain run off during the rainy season. Maradona was the only person to come forward to volunteer for this task. We have a nice friendship, discussing the pros and cons of polygamy and monogamy. I show two pictures, one in his hat and one in mine, which he dearly covets!

‘The women! My sisters who held me. They blessed me.’

Debra Messing was among the stars to comment on the post, with the Will & Grace star writing: ‘Ashley~ God was with you, and what a miracle. Your brethren gathering, planning, carrying your broken body, it is the best of humanity. I cannot imagine the excruciating pain, the fear, the trauma you have experienced. I am just so grateful to every person who helped bring you to medical attention. Please know you are in my thoughts and pray for full and gentle recovery.’

After being transported out of the rainforest, Ashley was flown to the capital of Kinshasa for 24 hours before being taken to South Africa to be treated in the intensive care unit.

Speaking to New York Times journalist Nick Kristof last week, the Divergent star explained that the facilities in Congo were not equipped to deal with ‘massive, catastrophic injuries’ like the one she had sustained on her leg.

Ashley said that the widespread poverty in Congo means people often do not have running water or electricity, let alone ‘a simple pill to kill the pain when you’ve shattered a leg in four places and have nerve damage’.

She said: ‘The difference between a Congolese person and me is disaster insurance that allowed me 55 hours after my accident to get to an operating table in South Africa.’

Ashley was in Congo doing conservation work and researching bonobos in the wild, with her and her partner visiting the region twice a year.

Who was Pop Smoke and what was his real name?

Reading and Leeds festivals will go ahead this summer: ‘Let’s go’