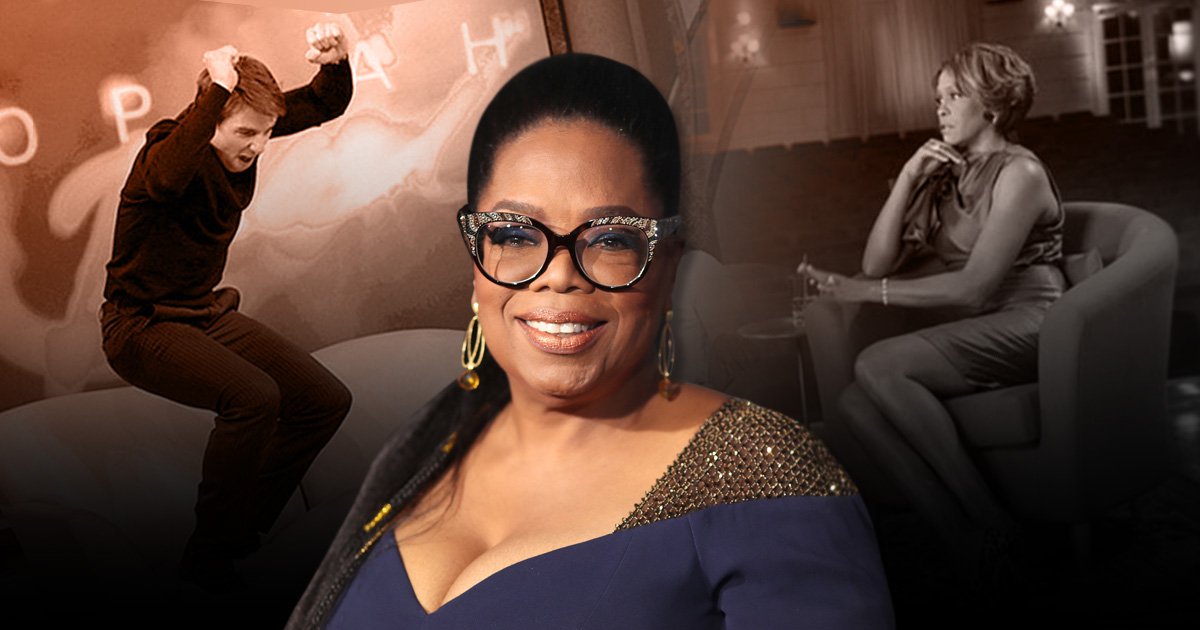 It was probably a no-brainer that Meghan Markle and Prince Harry would choose Oprah Winfrey for their first interview since quitting as working senior members of the royal family.

Queen O, as she’s affectionately known as, has a history of getting the most jaw-dropping and uncomfortable moments out of the biggest stars when they sit – or jump – on her couch.

Everyone from Tom Cruise to Whitney Houston and Madonna has experienced what it’s like to get the Oprah treatment.

Meghan and Harry will sit down with the media mogul on March 7 to discuss how they’ve found their new life living in Los Angeles with son Archie, one.

Billed as an ‘intimate conversation’, it will be the first time the royal couple have sat down for an interview since leaving England and setting up their new life in the US, leaving behind the establishment and many of the duties that come with it.

As everyone heats up their popcorn in time for one of the most anticipated chats in recent memory, here’s a look back at some of Oprah’s most memorable interviews to date.

In 2005, Tom Cruise was a man in love with Katie Holmes and apparently words weren’t enough to express his emotions.

‘Something happened to you,’ Oprah repeatedly noted to an excited Tom who couldn’t quite sit still.

Oprah was as stunned as her cheering audience, admitting: ‘We’ve never seen you behave this way before.’

For some reason, Tom’s only response to that was to jump onto the couch out of pure elation – not once, but twice.

If that’s what love makes you do, we want it.

Oprah made Whitney Houston feel comfortable enough to detail her drug use for the first time ever, completely unfiltered.

By the time the interview happened, the I Will Always Love You singer had split from her husband Bobby Brown and revealed how turbulent their marriage was.

When asked what her choices of drugs were, Whitney replied: ‘Cocaine. And marijuana. That’s it. But [Bobby] liked to drink. I wasn’t a drinker. The alcoholism, that’s an ugly thing. Either you’re going to be a really nice alcoholic or a really mean one. He was really mean.’

Recalling the worst thing Bobby ever did to her, the musician said: ‘He had such a hate in his eyes for me.

‘Because I loved him so much. He cursed me all the way home in front of his parents, and then he spit on me.’

In 1993, Oprah sat down with the King of Pop for what would become at the time the most-watched TV interview in history with 90 million viewers tuning in across the US.

Michael opened up about his father Joe Jackson’s methods of discipline and revealed: ‘I don’t know if I was his golden child or whatever it was. Some may call it a strict disciplinarian or whatever, but he was very strict. He was very hard. Just a look would scare you.

‘There’s been times when he’d come to see me, and I would get sick. I’d start to regurgitate.’

Meghan might want some tips from Sarah Ferguson before her interview with Oprah as she spoke to the host about her life in the royal family and split from ex-husband Prince Andrew.

Fergie said: ‘That is the fairytale but then comes the realism that you don’t marry to get the fairytale… it’s not a fairytale, it’s real life.’

Oprah isn’t used to her guests not playing ball but Elizabeth Taylor certainly kept her on her toes.

Prior to their sit-down in 1988, Elizabeth stated she wasn’t willing to discuss her famous relationships and when the cameras started rolling, her answers were brief, to say the least.

It wasn’t until much later after the interview that Oprah learned Elizabeth was suffering from back and hip pain.

They made it up years later when Elizabeth returned for a full interview in 1992.

Oprah could easily have put her interrogation tactics to use in the police force as she managed to coax Lance Armstrong into a confession in 2013.

The cyclist had spent years denying that he used performance-enhancing drugs but finally admitted to Oprah that he used them to win his seven Tour de Force titles.

‘Going on holiday is the difference between living and existing’