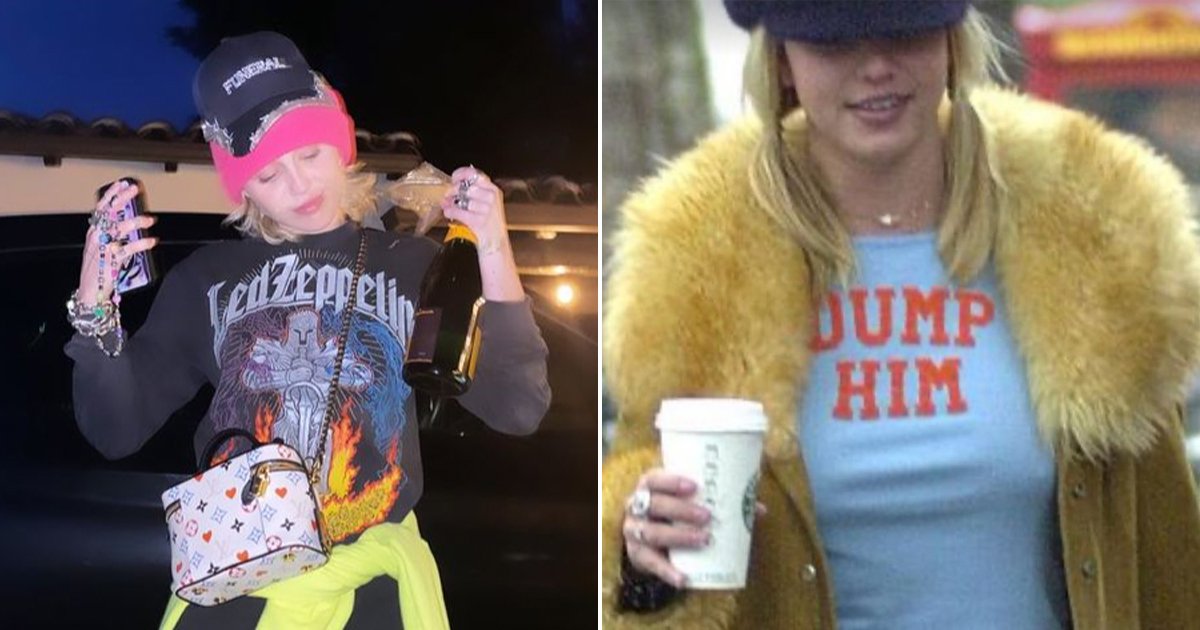 Miley Cyrus was seen taking inspiration from an iconic ‘dump him’ T-shirt Britney Spears once wore, as she told fans she was more interested in wearing hats than dating.

The Wrecking Ball hit-maker, 28, is currently single and recently opened up about having her ‘heart broken a lot’ while on stage during a pre-game Super Bowl gig in Tampa.

Miley choked up as she sang about heartache, but it seems she’s done with dating if her latest Instagram posts are anything to go by.

Taking inspiration from Britney, Miley was seek poking fun at her past romances, as she shared a snap of her fellow star rocking a Juicy Couture T-shirt with the slogan ‘dump him’ circa 2002. Iconic.

Alongside it Miley joked: ‘Already did, Brit.’

That was after she shared a snap of her posing in a Led Zeppelin jumper, holding a bottle of champers in one hand and wearing multiple hats on her head – because why not?

If that wasn’t a dig at her former flames, then we’re not sure what is.

Miley’s last relationship was with Australian singer Cody Simpson, with the pair splitting in August after dating for less than a year.

She’d got together with Cody after a month-long fling with Brody Jenner’s ex-wife Kaitlynn Carter that came after her split from ex-husband Liam Hemsworth.

Miley dated Liam on and off for 10 years, after meeting the actor on set of The Last Song in 2009.

They eventually tied the knot in December 2018 at her family home in Nashville, but their marriage lasted just eight months, before Miley and Liam confirmed their split in August 2019.

Their divorced was later finalised in January 2020 and looking back on their relationship, Miley admitted that herself and Liam hadn’t planned on getting married when they got engaged.

It was losing their Malibu home in the Californian wildfires that sparked their decision to tie the knot, with Miley telling Howard Stern in a frank interview that she loves Liam ‘very, very much’.

She said: ‘I don’t know if we ever really thought we were actually going to get married. I just clung to what I had left of that house, which was me and him.

As of now, though, Miley is single and she’s declared she’s ready to have some fun when it comes to dating – that is, once coronavirus finally becomes a thing of the past.

Miley told fans on Instagram: ‘Man. Being single sucks. All I ever do is WHATEVER THE F❤️CK I WANT! Bahabahahahahabahahhahaha,’ as she shared a clip of herself on stage revealing: ‘I’m single now, you know. After Covid, I’m ready.’

MORE : Oprah Winfrey’s most iconic interviews as she prepares to grill Meghan and Harry

What you need to know about Oprah’s Prince Harry and Meghan Markle interview: ‘It...

Kim Kardashian has officially filed for divorce from Kanye West

Kelly Marie Tran Gets a Surprise From the Original Voice of...