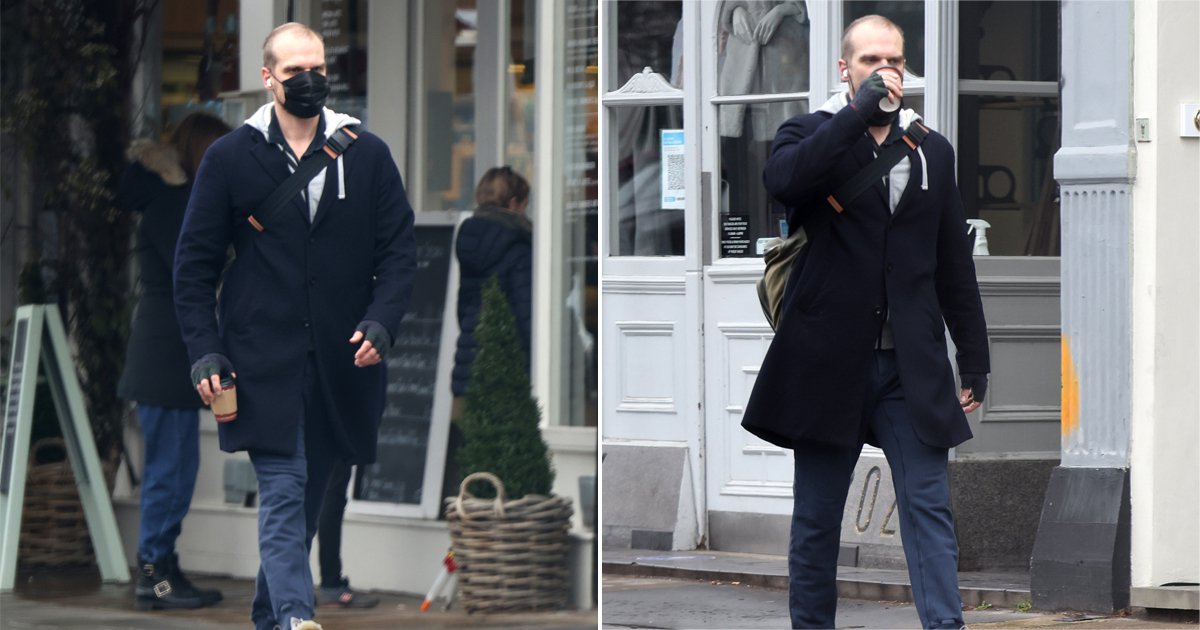 David Harbour has been spotted on a solo coffee run in London, after spending lockdown in the UK with Lily Allen and her children.

The Stranger Things actor, 45, was spotted wearing a black face mask as well as a warm coat over a hoodie as he headed out in Notting Hill on Tuesday.

David stopped to pick up a takeaway coffee, which he was seen sipping as he walked, while wearing fingerless gloves amid the changeable temperature.

He has been spending lockdown with wife Lily, 35, at her home in North London, along with her nine-year-old daughter Ethel and Marnie, eight.

Although Lily wasn’t with him on this outing, she revealed that she was struggling to get motivated this week, telling her followers: ‘can’t get going this week’.

The Smile singer had shared a sweet video over the weekend, which saw David bonding with her children as he pulled faces and did impressions to make them laugh.

David and Lily have been married since September, after tying the knot at the Graceland Chapel in Las Vegas.

Lily admitted that the pair had hoped to keep their wedding a secret but it was tweeted out by the city’s Twitter account.

She joked om the Sex, Lies and DM Slides podcast: ‘We didn’t plan to announce it to anyone, it was meant to be a very private affair we were leaving Vegas and driving to Los Angeles and Nevada Clark County tweeted our marriage certificate.

The singer also told fans last month that she is celebrating 18 months of being clean and sober, adding that she ‘would recommend’ making the change.

Dolly Parton ‘gets a dose of her own medicine’: Singer is latest celebrity to...