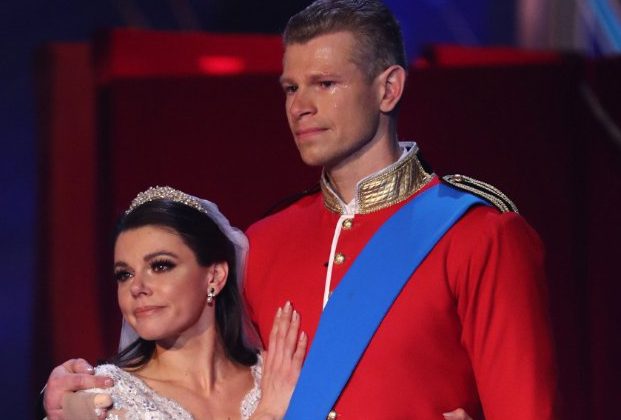 Dancing on Ice’s Hamish Gaman has been forced to pull out of the competition after injuring his finger off the ice.

The skating professional, who was partnered with Corrie star Faye Brookes, has withdrawn from the ITV show after sustaining an injury by pulling up a sock.

Ahead of Sunday’s show, Hamish was signed off by the medical team as safe to skate with some adjustments to the routine.

However, after follow-up examination this week and careful consideration the medical experts’ have concluded that he is unable to continue.

Confirming the news, an ITV spokesperson told us: ‘Sadly we can confirm that Hamish Gaman, who has been partnered with Faye Brookes, has had to withdraw from the competition.

‘We thank him for all his hard work and wish him the very best as he takes some time out to allow his injury to fully heal.’

It is now understood that Matt Evers, who was partnered up with Denise Van Outen at the beginning of the series, will take Hamish’s place and skate with Faye when the show returns next week.

Speaking on Heat Radio about the incident, Hamish explained: ‘Faye wasn’t fully aware but I snapped a tendon in my hand and I was advised before the show that I’m putting my finger at risk for the rest of my life here.

‘It’s one of those scenarios where there was a lot of people dropping out of the show and I love this show so much and I didn’t want to let the team down.’

‘They strapped up my hand so I could get through the show,’ he continued. ‘We had to make a lot of changes to the routine last minute, we re-choreographed the whole second-half.

‘Faye did incredibly to learn the routine last minute. We had to change all of our lifts because of my hand, as I couldn’t do certain movements.’

The accident comes after TV bosses announced that Dancing On Ice had been pulled off air for one week in order to cater to the welfare of the cast and crew.

Including Hamish, five stars have had to make premature exits from the competition.

Denise Van Outen and Billie Faiers withdrew due to injuries, while Rufus Hound and Joe-Warren Plant tested positive for coronavirus.

Jason Donovan also had to sit out last weekend after a back strain.

MORE : Dancing On Ice 2021: Hamish Gaman ‘snaps tendon in hand after trying to put on a sock’ putting show future in jeopardy

Robbie Williams wants to buy Blackpool Pleasure Beach because why not?

Something in the air on Athens adventure

10 best bourbon whiskeys you need in your drinks cabinet