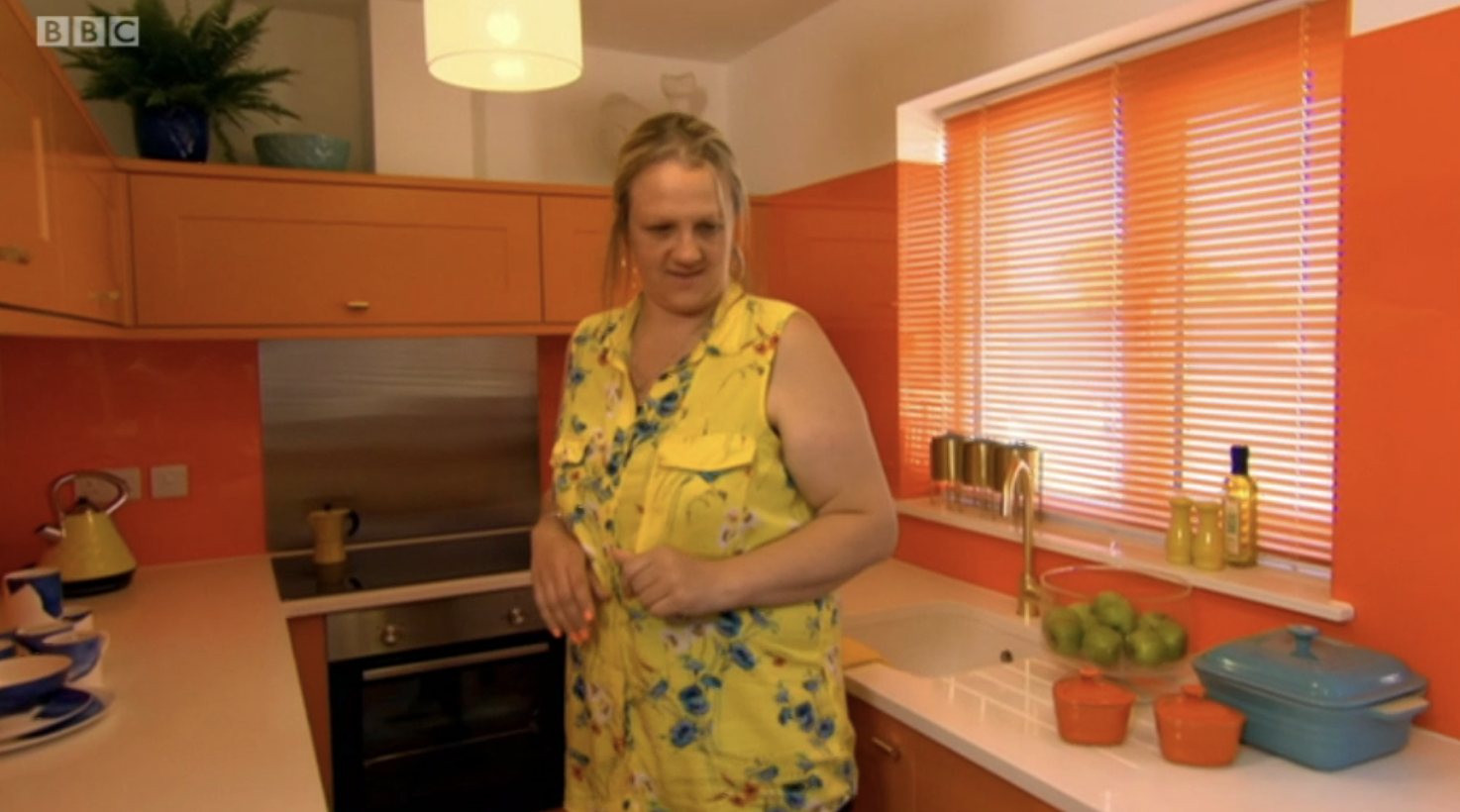 DIY SOS viewers were left unconvinced by Laurence Llewelyn-Bowen’s attempt at creating a high fashion kitchen, after he turned the entire room orange.

The former Changing Rooms star was at the helm of Monday night’s makeover on the show and he outlined an ‘international, cutting edge, high fashion’ theme for his design.

However, his design choices were questioned by host Nick Knowles – especially when it came to the kitchen, with its orange walls and cabinets, as he likened it to a Hi-Vis jacket.

‘We’ve basically made a Hi-Vis kitchen. It’s orange,’ he told the designer.

‘That’s what I wanted,’ Llewelyn-Bowen hit back. ‘Listen don’t get confused if you don’t understand this whole international cutting edge high fashion thing. Just looking at you I can see you’re out of your depth, this is what’s coming up.’

‘I am using my international expertise to design this house to be the best it can possibly be,’ he insisted.

Nick was seen asking the family if they felt the kitchen was ‘too orange’ on the big reveal and they insisted the colour was ‘perfect’, but fans watching at home were left unconvinced.

So much so, that some were seen comparing the kitchen to an easyJet check-in desk.

‘Having a little cry at #DIYSOS (and not just at the easyJet orange kitchen),’ tweeted one fan.

‘Wasn’t it nice of #EasyJet to donate the kitchen to #DIYSOS,’ joked another.

‘Kitchen looks great but I wouldn’t know if I should be cooking or checking in for an easyJet flight,’ joked one viewer.

One more teased: ‘#Diysos Nick: can I ask why you’re crying? Is it because your kitchen is bright orange?’

‘That kitchen !! Just why ?? Why …? Bet LLB hasn’t anything so bloody orange in his house,’

Orange kitchen aside, Monday night’s episode of DIY SOS proved to be an emotional one as it saw Nick Knowles and the team head to North Devon to help out a family who were desperate for an extension in order to house at-home treatment for their daughters.

Identical twins Daisy and Amber have kidney failure and are now in need of dialysis each week. While treatment could work at home, the family didn’t have enough space for both girls and one still had to travel 100 miles away to be treated at hospital.

The builders were having to start from scratch and came up against problems from the get-go, with complication with the council and planning permission and the groundwork team failing to turn up on the first day to lay the foundations – putting the project at a huge set back.

Luckily, the team were quick to get back on track and – a debate about whether cream or jam goes first on a scone later – they were soon catching up on last time on day one.

The final build created a storage extension at the side of the house to store medical equipment weighing up to a tonne, a bedroom for Daisy and Amber equipped with at-home dialysis stations and a wet room and third daughter Lola finally got her own unicorn-themed bedroom with her own bed.

The surprises didn’t stop there, as Nick revealed the garage had been turned into a downstairs bedroom for the parents and the garden was now fitted with a grass area and an inside play den.

The parents were thrilled with the finished result and gushed: ‘How do you do that in nine days? It’s beyond anything we could ever, ever dream of.’

DIY SOS airs Mondays at 9pm on BBC One.

John Lewis’ sold-out weighted blanket is back in stock

Will there be a Finding Alice series 2?

[OLD] The United States vs Billie Holiday review: A sloppy, reductive take on the...