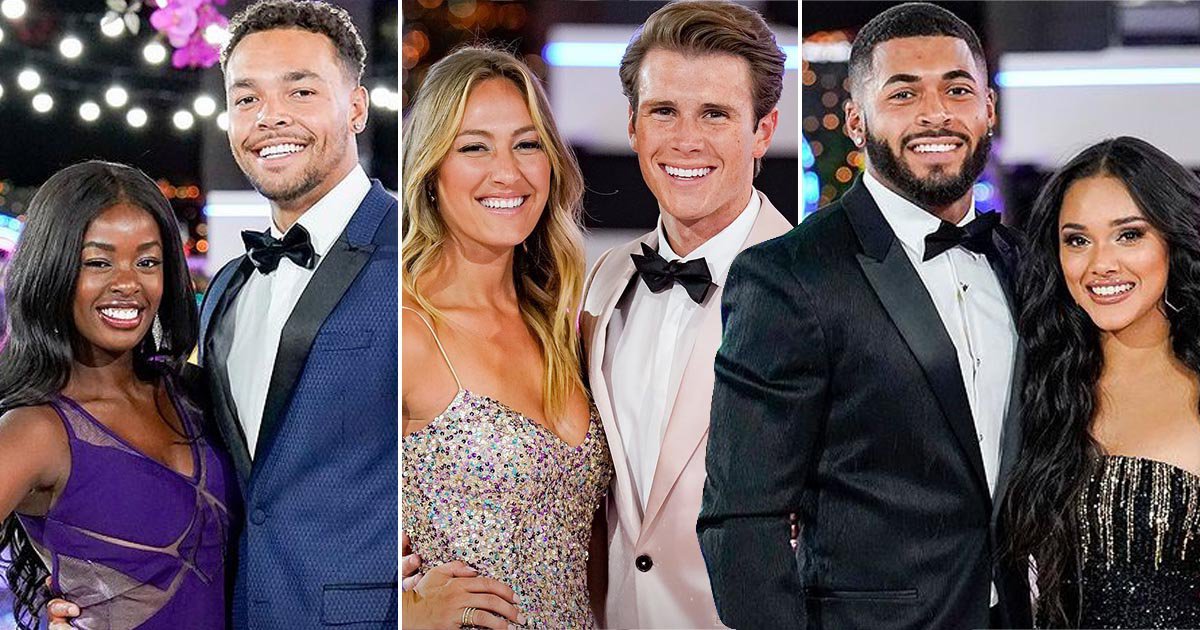 Love Island USA is all about helping couples find love, but – as the recent split of Cely Vazquez and Johnny Middlebrooks proves – not all love lasts forever.

Fans are keen to know how successful has the show been when it comes to the contestants from season two and, thankfully, some couples are still together.

When the show ended, we had a whole heap of couples leaving the villa together including winners Justine Ndiba and Caleb Corprew.

Then the likes of Connor Trott and Mackenzie Dipman reunited after they left Vegas and gave things another go.

So who is still together from Love Island season two? We’ve got the deets.

As the official King and Queen of the villa, Justine and Caleb won the hearts of fans and left the show as the winners of season two.

Naturally, it has been hard for the pair to see each other as much as you would expect due to the fact they live on separate coasts during the ongoing pandemic.

Speaking to Metro.co.uk last year, the pair told us that they are taking the slow and steady approach with their relationship for now.

The pair added they would eventually figure out where they’ll settle down as a couple but some fans aren’t sure if that will happen.

Rumors have been swirling that the couple might actually have called it quits due to their limited posts about each other on social media.

However, the pair are still liking and commenting on each other’s pictures so they seem solid enough for now.

Johnny and Cely were going strong for months after the show but then they revealed they’d called it quits on Janaury 9.

Cely wrote on Twitter: ‘Because you’ve all been such a close part of our relationship, I wanted to share with you that Johnny and I are no longer together.

‘While our relationship has been public from the start, I do ask that you respect this decision and our privacy during this time. There is no reason to speculate, I am so thankful for our time together, but now it’s simply time for each of us to focus on our own personal journey.’

She continued: ‘I hope that you continue to support each of us individually as we move forward, heal and continue to follow our dreams.’

Johnny added on Instagram: ‘Thank you so much for everything. I’m appreciative of the time we spent together on this unforgettable journey. I will forever cherish the fun we had, the laughs we shared, and the memories we created.

‘Thank you to all of the fans who loved and supported us the whole way through. Much love.’

Moira and Calvin came in third place and they were making things work for a while after the show. By November 2019, it was all over.

Moira admitted to People: ‘After the show, when we left Las Vegas and went back to the real world, our plan was to take it day by day. I really wanted to try and make our ‘situationship’ work.

‘We just got too busy, our schedules didn’t match up, and the distance between us didn’t help either. It was neither of our faults, life just got in the way.’

She continued: ‘I was sad about it of course, because I thought we might be able to make something happen, but we just had to make a realistic decision and move forward.

‘We decided it would only be fair to ourselves to call it quits and go our separate ways.’

Laurel and Carrington put the villa drama behind them and tried to give long distance love a go.

After weeks of social media interaction, things went south for the pair as they split.

By December 2020, fans noticed the pair were no longer following each other on Instagram.

During an Instagram Live with co-star Johnny Middlebrooks, Carrington clapped back at fans as he stated: ‘We were talking, right? We weren’t boyfriend and girlfriend. And that’s fine, we knew each other for two and a half weeks out of the show. We gave it an honest effort and it didn’t work.’

He added that he supports Laurel in every way and would have no issues if she ‘had a boyfriend tomorrow.’

Connor and Mackenzie got together on the first day and seemed pretty serious before things went wrong thanks to Casa Amor.

Long story short, when they were both back into the real world Connor gave her a call.

In a post on Instagram, Mackenzie revealed: ‘Gus [her teddy] & I have been patiently waiting for him on the outside and we cannot wait to welcome him home! We have missed him SO much.’

The pair got back together and ever since then the pair have been inseparable, even sharing adorable pictures together over Christmas.

They might just be the most surprising success story of all.

Love Island USA airs on CBS in the States, and is available on ITV Hub in the UK.

The Chase star Anne Hegerty rules out romance with Harry Styles and reveals her...

Alcohol intake up, fruit and veg down: How our lifestyles became less healthy in...