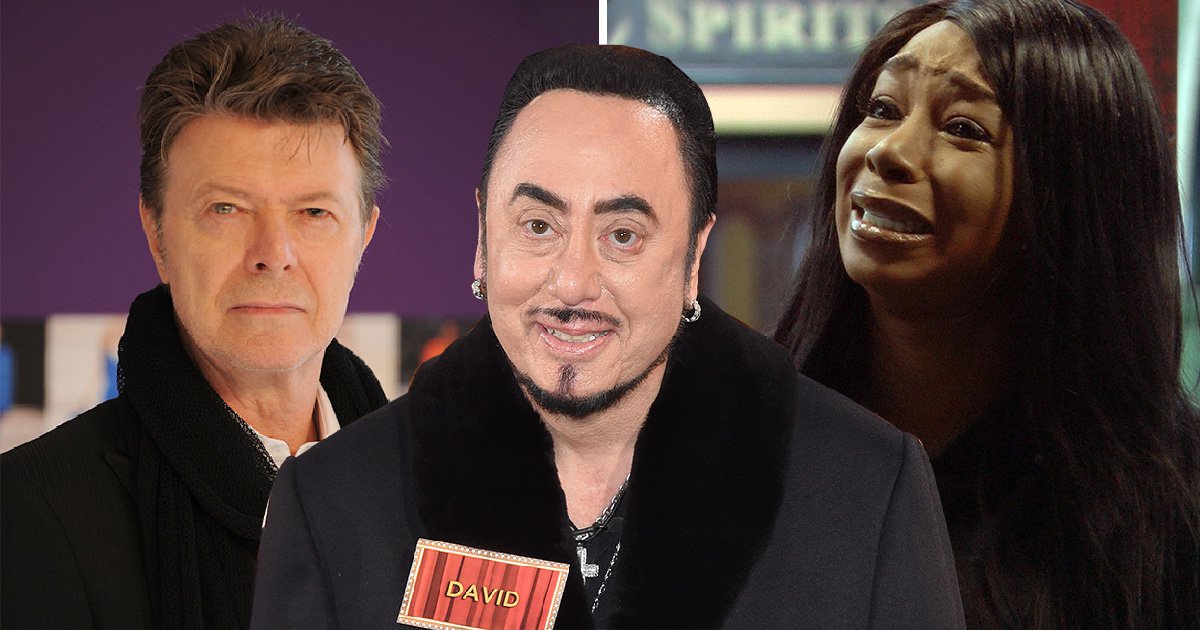 ‘You can’t say a word, David’s dead.’ David Bowie’s ex-wife Angie had no idea what she as letting herself in for when she confided in Tiffany Pollard after learning the singer died a day prior on January 10, 2016.

Two days later, the unlikeliest storm was about to air on Channel 5.

When the world was mourning the loss of one of its most initiative, colourful beacons of creativity, wisdom and kindness in David Bowie, in a CCTV-laden bungalow in Borehamwood sheer chaos had ensued in a work of art even the Starman would be proud of.

Say the two words ‘David’s dead’ to a gaggle of reality TV boffins and unruly cheers ensue for hours on end. At least they do in my household. Regularly.

For those unfamiliar with the legendary tale of Tiffany Pollard confusing the ex-husband of Liza Minelli with one of the most celebrated musicians of all time, sit tight – you’re in for a ride.

As news broke of David Bowie’s death, Angie – his ex-wife and the mother of his child Duncan Jones -was locked up in a house with Ex on The Beach stars, Kim Kardashian’s best mate, soap royalty and Darren Day.

After Big Brother took Angie aside to inform her of the singer’s death from cancer, she turned to one of her closest allies for comfort and privacy. However, just meters away, David Gest was tucked up in bed, covers over his head as though he really had been laid to rest in the Big Brother bedroom after falling ill.

No one could have possibly predicted the two very separate incidents would come together to create such an extraordinary disaster.

As Angie informed the ferocious US reality star ‘David’s dead’, Tiffany collapsed on the floor and wailed in disbelief.

‘No he’s not,’ she cried, visibly crushed at the thought that a man she’d spent the past week living with casually passed away in the night – but it was to be a secret between her and Angie. Instead of looking for more answers, betraying Angie’s trust, Tiffany darted to the garden to tell her housemates David Gest had died of cancer.

‘I can’t keep it a secret, she told me not to tell anybody. He told me something and I have to say it. I’m not able to not say anything.’

While Angie mourned the death of the father of her child, said housemates investigated only to find Gest alive and alarmed as Darren pulled back the covers.

But it didn’t end there. Rather than retreating and holding her hands up to an unfortunate mistake, Tiffany saw red, adamant Angie uttered four words ‘David Gest is dead’ instead of the now infamous two – and the world watched on in disbelief.

Of course, David Gest did tragically die just months later, with his body discovered in a London Hotel room after suffering from a stroke. Cashing in on her misfortune, naturally Tiffany has spent weeks shifting ‘David’s Dead’ T-shirts only for them to suddenly take on a grim new connotation. Her new clothing lone was subsequently pulled.

It’s an extraordinary chain of events which by some miracle came together to create the perfect disaster. Gest himself was about to embark on the ‘David Gest is not Dead tour!’ but tragically died just months after leaving the Celebrity Big Brother house.

The ‘David’s dead’ moment has got to be the biggest misunderstanding in television history! It was truly iconic. It’s an episode that fills you with many emotions from sadness when Angie hears the terrible news, confusion when Tiffany then hears the news & laughter when the penny drops and the drama unfolds while the only people who could dispel the drama are either sleeping (not dead) or in the shower!

It was set up perfectly from start to finish. It’s one of those moments that you can just re-watch and re-watch whenever you’re feeling a little glum – it’s the perfect way to escape. It was truly an unbelievable moment which nobody could see coming and could NEVER be written.

I’ve always compared David Bowie to a God; and it felt like divine intervention that two of my biggest loves, Big Brother and David Bowie came together to create the greatest moment in reality TV history.

This moment was not just any shocking moment, this became iconic television. There is a lot to digest and process. It truly is a ‘rollercoaster of emotion’ – we go through despair, shock, anger, pure fury, disbelief and the clip ends on the edge of sympathy and guilt.

I always end every viewing with a new favourite moment – this time, it was Danniella Westbrook’s moment of silence after Angie Bowie wearily explains: ‘My ex-husband David.’ I love this clip because it displays Big Brother at its very best – a programme that is allowed to demonstrate how human beings (celebrity or civilian) cope in that crazy controlled environment.

We’ve seen important moments dealing with sensitive issues such as racism, sexuality and betrayal – but on this occasion, was potentially the closest we’ve ever come to seeing death induced grief in the house. Big Brother brought down barriers and opened up conversations about taboo subjects like no other reality show, and its presence is sorely missed on television today.

If you asked Twitter for its most iconic memories of Big Brother UK you’d see three moments come up time and time again – Nikki Grahame ranting in the Diary Room about Golden Housemate Susie Verrico, Kim Woodburn yelling “adulterer!” and sploshing her wine over the arm of a security guard and a pre-problematic Tiffany ‘New York’ Pollard crumbling to her knees at the news that one of her fellow Housemates had sadly died during the filming of the show.

Of course, this comedy of errors is an iconic ‘wrong end of the stick’ fiasco that transcends the fleeting nature of reality TV and lives on in our minds, and memes, rent-free. A moment so ridiculous it just couldn’t be written.

A moment so ridiculous it just couldn’t be written.

It really was the storyline that kept on giving – a perfect storm that only Big Brother could have created. Surely it’s time for a return to our screens? I’m looking at you Channel 4!

Watching Celebrity Big Brother is bizarre at the best of times, but no moment quite lives up to this. I think the situation is so iconic purely thanks to Tiffany’s reaction. Nobody could quite predict what was going to happen and watching it unfold on screen was unbelievable.

It’s one of those moments where Celebrity Big Brother is at its best –  it was such an odd scenario to be watching. The moment the penny drops that Tiffany is thinking of the wrong David was truly a piece of television gold and the rest of the housemates’ reactions just framed it perfectly. I don’t think you’ll ever get another moment like that on reality TV and you can’t escape it! It still pops up across social media all the time, a true CBB legacy.

All these top-rated M&S jeans are now on sale, with prices starting at just...

The Best Disney Channel Original Movies to Watch on Disney Plus