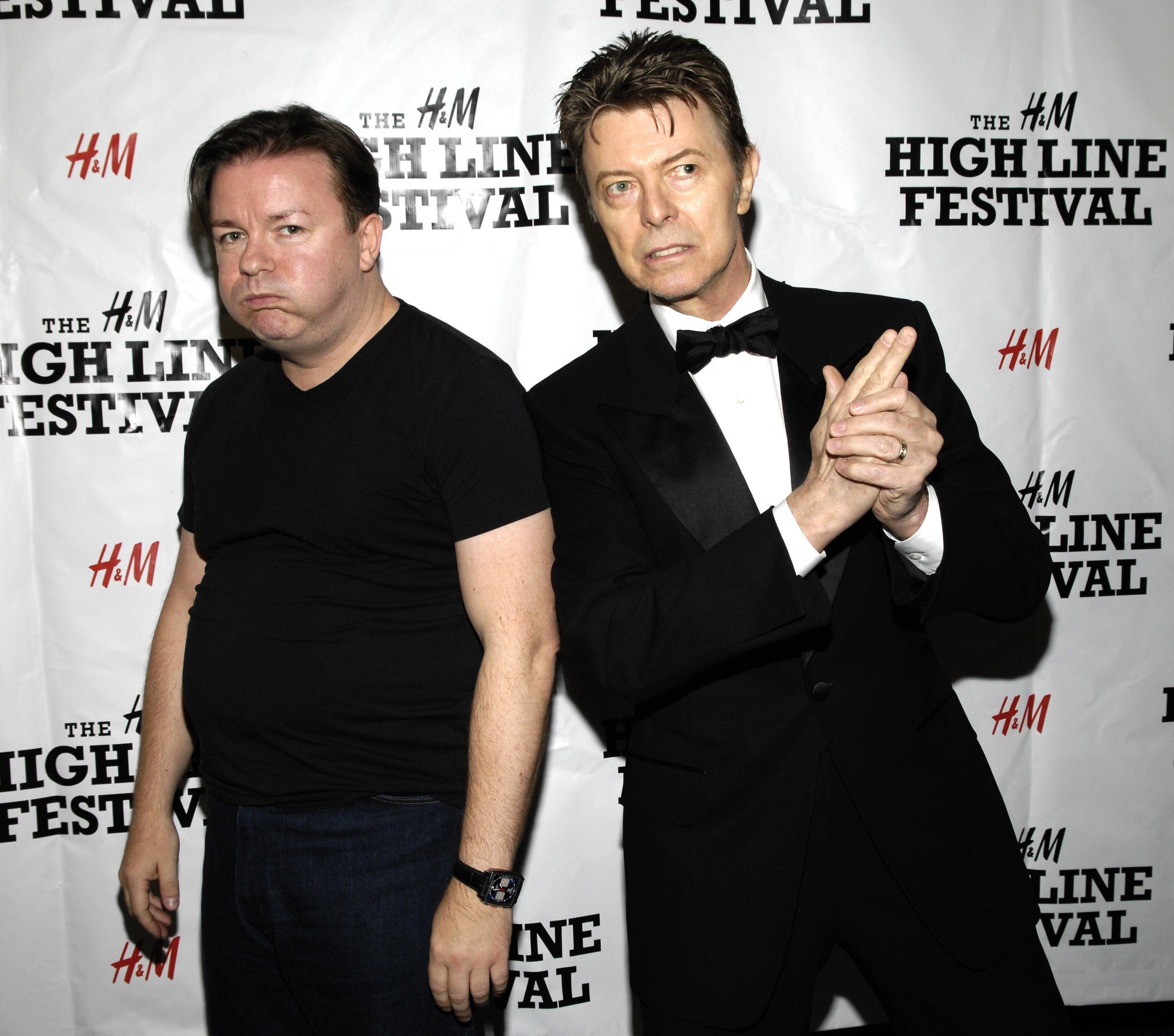 Not everyone is lucky enough to receive an email from the David Bowie, but for Ricky Gervais he has revealed the astonishing moment he was once approached by the late icon.

After the pair met backstage following a BBC special performance by the singer, Ricky said he soon landed a message from Bowie in his inbox despite him not swapping contact details.

Who would ever doubt Bowie’s ability to track someone down, though?

Recalling their first meeting backstage, Ricky told The Telegraph: ‘In the green room afterwards, then director-general Greg Dyke bounced over to me and Jane [Fallon, Ricky’s partner] and said, “You’re a big Bowie fan, aren’t you? Do you want to meet him?”

‘I said, “Oh, I don’t want to pester him”. He said, “No, come on”. Then he shouted “Salman! We’re going to say hello to David.” So there I was, with the head honcho of the Beeb and Salman Rushdie, chatting to Bowie in his dressing room.’

Ricky went on to say that while Bowie admitted he’d not watched any of the comedian’s work, he later caught up on The Office and clearly he was a fan of ol’ mate David Brent.

The went on: ‘I don’t know how he got my email address. He’s like the FBI. But he said: “So I watched The Office. I laughed. What do I do now?”‘

The comedian appeared to form a fond friendship with Bowie – who died in January 2016 – with the Starman hitmaker appearing on Ricky’s show Extras (we’ll never forget ‘chubby little loser/pathetic little fat man’) before Ricky then performed a set at Bowie’s High Line Festival in 2007.

Ricky said: ‘I went over and Madison Square Garden was sold out. I thought it was just going to be this little benefit gig, so I asked Bowie: “What sort of stuff shall I do?” He said: “Anything you like as long as it’s delightfully offensive”.’

Many celebrated what would have been Bowie’s 74th birthday on Friday, with his son Duncan sharing a sweet photo alongside his dad pulling a funny face.

Writing ‘happy birthday goofball’, he went on to add: ‘Embarrassing dad pics are the best. I’m working on some of my own with my kids.’

January 8 marked what would have been his birthday and an official account was set up to mark the occasion on TikTok.

The Starman died two days after his 69th birthday at his home in New York following a battle with liver cancer.

He had been diagnosed 18 months earlier but had chosen to keep it private, releasing his final album Blackstar two days before he died.

The music legend had insisted he did not want a funeral and was cremated instead with his ashes scattered in a Buddhist ceremony in Bali, Indonesia as requested in his will.

MORE : Ricky Gervais turned down chance to be first comedian to perform in space: ‘I’m not going to risk it’

MORE : London Zoo refuses to give Ricky Gervais dying wish of being eaten by lions

Beckhams pay themselves £21m in dividends over two years

Where was Catherine The Great from and when did she live?