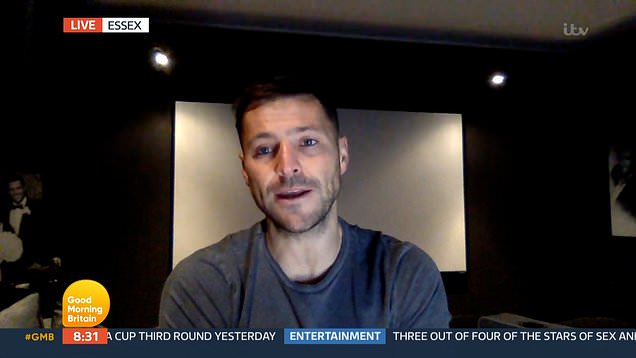 Mark Wright says his dad has been affected ‘mentally’ by his battle with Covid-19 during a worrying time for his family.

Some of the former Towie’s star’s family members, including dad Mark, and mum Carol, tested positive for the virus at the end of last year.

One of his uncles is still seriously unwell, and although Mark Wright Snr is now out of hospital and recovering at home, the 33-year-old confessed he is ‘not the same person’.

‘It’s not until you see it first hand you that realise, “I need to buck up my ideas”.

‘I’ve got friends that are conspiracy theorists saying “We don’t need to lock down”. I tell them the government, whatever their role, they know more than you. If they are telling you to do this, do it.

‘If you get to my point where you’re looking at potentially losing family members, you will regret doing what you’re doing. So listen to the rules, stay at home.’

Mark continued: ‘When you see it first hand it is the scariest virus you will ever see. The things it does to the body, like with my dad – he won’t mind me saying this but mentally something is not right there. He’s not my dad that he was four weeks ago. It can leave long term problems.’

The presenter went on to praise the NHS for looking after his family during the ‘scariest’ time of his life.

‘I Facetimed him and said, “Does this make you feel the NHS are amazing?” He took off his mask and said, “It’s ridiculous, you can’t even comment. They are absolute heroes, they are amazing”. So thank you for everything you’re doing at the moment you’re sensational.’

His message was fully supported my hosts Piers Morgan and Susanna Reid who wished him and his family all the best.

Carol recently described what her and Mark Snr had been through, writing on Instagram that they were ‘attacked with the virus all over Christmas’, and she was ‘suffering the worst coughing fits ever’.

She added: ‘Never take things for granted, always be there for others and it’s made me appreciate life so much. The little things in life are more important then the big ones. Love and caring is all we need.’

Good Morning Britain airs weekdays from 6am on ITV.

MORE : Dame Joan Collins, 87, ‘honoured’ to get Covid-19 vaccine on the same day as Queen and celebrates with drink

What happened at the end of The Bay season 1?