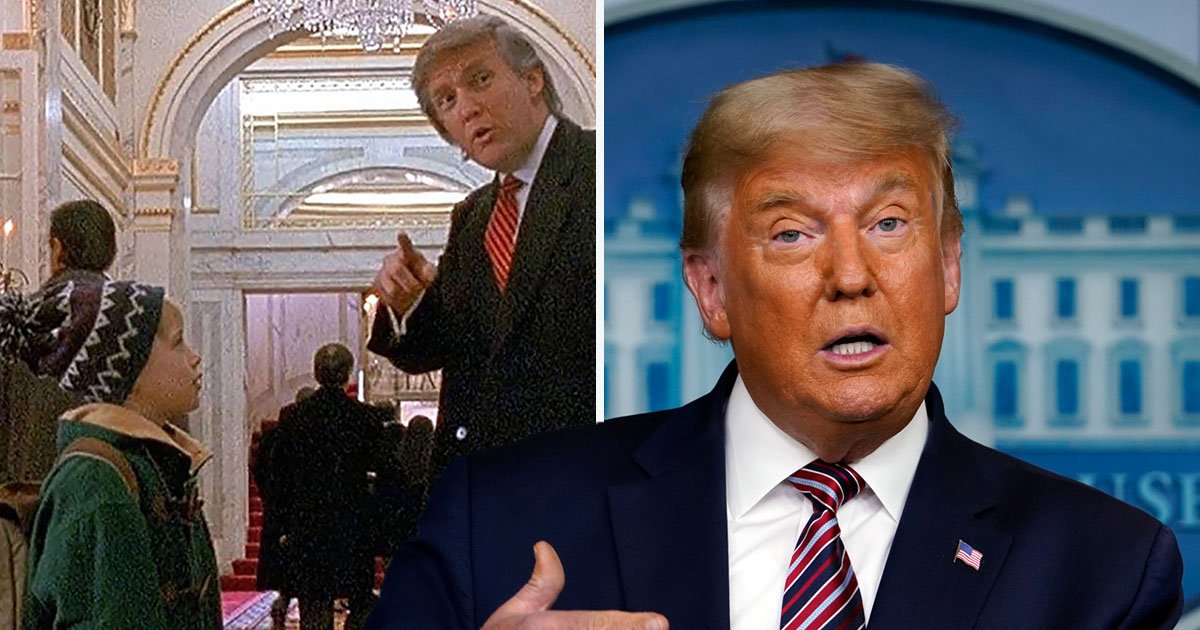 There have been calls to digitally remove Trump from Home Alone 2: Lost In New York, following this week’s shocking scenes at the Capitol building in Washington DC.

Articles of impeachment against Trump will be introduced tomorrow after the incumbent President told rioters who had stormed the Capitol in an effort to prevent Joe Biden’s certification as president that he loved them and they were ‘special’.

Movie fans joked that after Trump was booted from major social media platforms, the next logical step is to wipe his cameo from Home Alone 2.

Others joked that Christopher Plummer would be replacing Trump – referencing Plummer replacing Kevin Spacey in All The Money In The World with just weeks to go until the film’s release, after sexual misconduct allegations were made against Spacey.

One crafty movie lover even edited Home Alone 2’s IMDV trivia page to read: ‘As of January 2021, Donald Trump is the only cast member of Home Alone 2  to both attempt a violent overthrow of the American democratic system and get banned from Twitter in the same week.’

While we doubt Trump – who was simply a tycoon rather than a president when the film was released in 1992 – will be scrubbed from the film altogether, the scene is often cut from television broadcasts for length reasons.

In the movie, Kevin MacCallister (Macaulay Culkin) passes Trump while looking for the lobby in the Plaza hotel and asks him for directions.

At the time, it wasn’t that weird to see the businessman pop up in the New York-based film as himself, but it turns out Trump wasn’t offered the role by anyone on set.

Chris Columbus, who directed the first and second Home Alone movies, explained that to film in the Plaza Hotel, which Trump owned at the time, they had to give him a role in the family caper.

He told Insider: ‘Trump said okay. We paid the fee, but he also said, “The only way you can use the Plaza is if I’m in the movie.”

‘So we agreed to put him in the movie, and when we screened it for the first time the oddest thing happened: People cheered when Trump showed up on screen. So I said to my editor, “Leave him in the movie. It’s a moment for the audience.”

‘But he did bully his way into the movie.’

Ahead of the violent riots on Wednesday where four people died, including one woman who was shot, Trump repeated his false claims that the election was stolen from him at a rally near the White House.

This claim was the driving force behind the protest turned mob at the Capitol, who wanted to stop the count of the electoral vote on the Senate floor.

Joe Biden is due to be inaugurated as President on January 20.

MORE : Graham Norton found the Alison Hammond dead dog moment funny: ‘I did it in a deliberate way to be awkward’

MORE : From Top of the Pops to Ziggy Stardust, David Bowie’s most iconic moments on fifth anniversary of his death

From Queenie to The Mating Season, 15 books to help you beat the January...