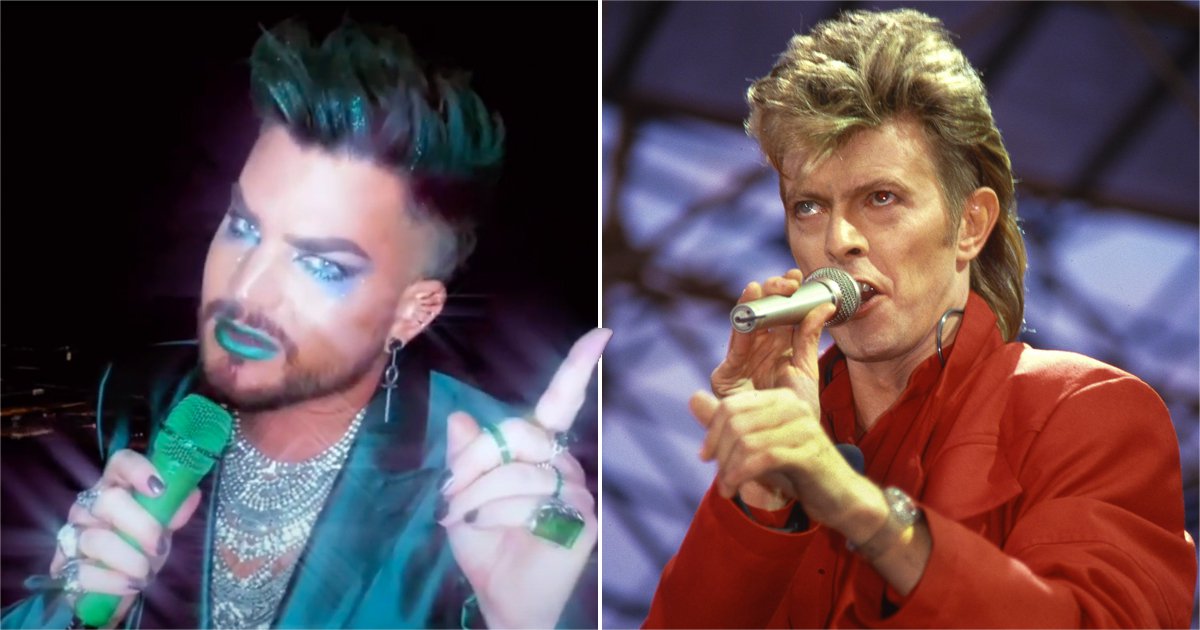 Stars including Adam Lambert, Duran Duran and Yungblud came together for a stunning tribute to David Bowie on the fifth anniversary of his death.

Presented by pianist Mike Garson, Bowie’s longest-standing band member, A Bowie Celebration honoured some of the music legend’s most beloved and enduring songs with a three-hour concert.

The setlist not only boasted some of the greatest rock and pop songs of all time, but an all-star roster of performers, as acclaimed musicians covered Bowie’s greatest hits, backed by Garson and a live band – with every one of Bowie’s studio albums represented by at least one alumni band member.

Queen frontman Adam Lambert provided one of the standout moments of the night, performing a theatrical version of the classic song Starman.

Dressed in teal satin and sparkling silver jewellery, the 38-year-old went all out with glittering eye make-up and green lipstick as he brought his powerhouse vocals for a glam rock inspired rendition of the 1969 song.

UK star Yungblud got to take on one of Bowie’s defining songs, singing Life On Mars, and the 23-year-old seemed overwhelmed as he watched his performance online from home.

The singer, real name Dominic Harrison, shared a video of himself watching a video of him hitting the high notes, with a friend saying: ‘Well done lad.’

Yungblud wrote: ‘Best moment of my entire life’, and changed his Twitter name to YUNGBLUD’s on mars.

Duran Duran kicked off the concert with a cover of Five Years, before Lena Hall and Lzzy Hale performed a virtual duet of Moonage Daydream.

Boy George performed a medley of Lady Grinning Soul, Time and Aladdin Sane, while Gary Oldman made an appearance to sing I Can’t Read.

Slipknot’s Corey Taylor took on Little Fat Man and Hang On To Yourself, while Nine Inch Nails’ Trent Reznor took the lead on Fantastic Voyage and Fashion, helped by Atticus Ross.

Dave Navarro was joined by Taylor Hawkins and Chris Chaney on Rock ’n’ Roll Suicide, and Dexter star Michael C Hall, who starred as Bowie in the musical Lazarus, gave a powerful performance of Where Are We Now?

Bernard Fowler sang Candidate and Sweet Thing, and closed the show with a cover of Heroes.

After the show ended, a statement from the team behind A Bowie Celebration was tweeted reading: ‘Thank you David. And our thanks to you all for coming together in a world where that has been so difficult. This couldn’t have been done without you, the amazing Bowie alumni family, our special guests and wonderful behind the scenes team at @rollinglivepro.’

Fans were left emotional by the concert, with one tweeting: ‘The #bowiecelebration is exhilarating, joyous, and also resurfacing the painful loss of a freaky genius. I hope some version of this will be available to purchase someday.’

The star-studded show was initially set to broadcast on Saturday night, but Covid restrictions shifted it by 24 hours.

A statement from Rolling Live Studios read: ‘We’ve been working around the clock for months putting together an amazing show for you. Due to the difficulties in the world and the situation with COVID in Los Angeles, we’ve had to move the show 24 hours to tomorrow at the same time. Hang in there with us – just for one day.’

However, the show went off without a hitch as it aired at 2am GMT (6pm PT on Saturday 9 January), with viewers paying $25 (£18) for tickets.

$2 (£1.47) from each ticket will go to Save The Children, a charity which was close to Bowie’s heart.

A Bowie Celebration is available to stream for 24 hours after it first aired.

David Bowie died on January 10 2016, 18 months after being diagnosed with liver cancer.

His shocking death came two days after his 69th birthday and the release of his 26th and final studio album Blackstar.

What Brits will spend their money on in 2021

Why Sony should make another PlayStation handheld console – Reader’s Feature

Zoe Kravitz and Karl Glusman split after 18 months of marriage