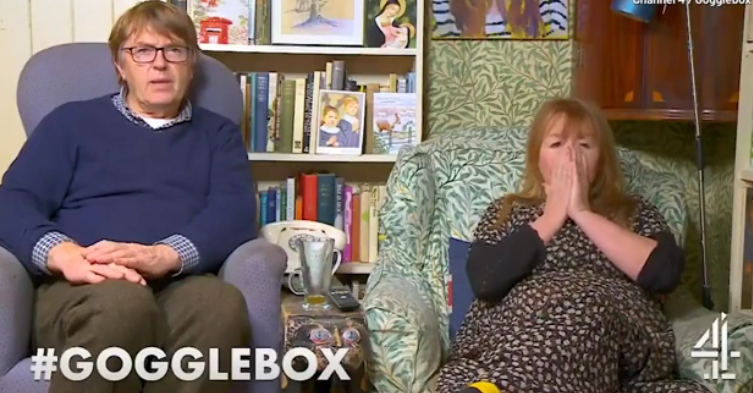 Gogglebox star Mary Killen was left in tears last night after watching the ‘simpler times’ of The Sound of Music.

Mary, who is a firm favourite on the Channel 4 show alongside her husband Giles, left viewers a tad baffled over why she got so upset about the film.

The clip that Mary got tearful over was when Maria, played by Julie Andrews, was seen teaching the von Trapp children songs as they sat in the fields.

‘A little simple, uncomplicated childhood – that now children don’t have because of the internet,’ Mary sobbed.

Some viewers agreed with Mary, with some branding the clip from the classic movie ‘heartwarming’ and ’emotional’.

One tweeted: ‘Couldn’t agree more Mary, feel tearful watching it, beautiful scenery, while another said: ‘Bless her. She never fails to make me smile.’

However, others were left scratching their heads as they thought Mary was missing one major point of the entire plot.

‘I’d rather have the Internet than the Nazis after me,’ One viewer tweeted.

One added: ‘Simpler times? Running away from Nazis. Got those rose tinted glasses on again.’

Another commented: ‘Selectively forgetting the Nazism too.’

‘They were living under a Nazi Regime! Not a particularly simple childhood,’ one viewer replied.

Earlier this week, Mary revealed how she quit drinking alcohol three years ago after a bad case of food poisoning led her ‘recoil’ at the sight of it.

The star gave up booze following a five-day bout of campylobacter – an infection from contaminated food and water.

Gogglebox returns to Channel 4 in February.

Rebel Wilson forced to change her name to Mel at school