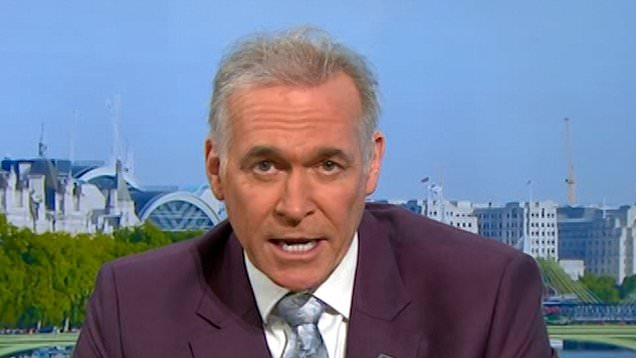 Dr Hilary Jones has said that the people who flout coronavirus lockdown rules have ‘blood on their hands’.

The GP appeared on Friday’s Good Morning Britain where he explained how the surge in Covid-19 cases from Christmas is still to come and we cannot afford to become complacent.

Speaking to hosts Kate Garraway and Ben Shephard, Dr Hilary warned that we won’t see the true effect of households mixing during the festive period until January 19.

He also expressed his concern over hospitals not being able to cope with the rise in cases.

‘We have to be realistic,’ he said.

‘We have got better treatments and some good news we have vaccination rollouts.

‘We have got lockdown and we have got new medications and airport testing, all of which could be better but we are getting there slowly.

‘But we must take lockdown much more seriously than we do because when I look on the road there are more cars than I saw in the first lockdown.’

‘People are finding excuses to get around the guidelines, and they have got blood on their hands because we are in a very serious situation,’ he added.

Ben went on to talk about the rise in cases as he explained that 10,000 people have been admitted to hospital since Christmas day.

‘That’s an extraordinary number,’ the host chipped in. ‘Am I right in saying we aren’t actually feeling the effects of mixing over Christmas just yet in those figures?’

‘January 19 is likely when we’ll see the effects of Christmas and New Year where there was more mixing of people in society,’ Dr Hilary explained.

‘That’s less than two weeks away so many doctors in intensive care with all that expertise are saying the way things are going we could be short of 5,000 beds even with Nightingale hospitals open.

‘I don’t want to scare people, I just want to instil a sense of reality about where we are. This is still a nasty virus and it’s still being transmitted.’

‘This is not the time to be complacent, and virus deniers and flouters have blood on their hands,’ he reiterated.

It comes after it was reported that weekly coronavirus cases jumped by a quarter in the last week of 2020, according to the latest test and trace figures.

More than 300,000 people tested positive for Covid-19 in England at least once in the week to December 30.

This is up 24% on the previous week and is the highest weekly total since test and trace began in May.

Good Morning Britain airs daily at 6am on ITV.

MORE : Kate Garraway shuts down Boris Johnson’s dad Stanley after he suggests getting second vaccine gives him ‘get out of jail free card’

The Pembrokeshire Murders: Is Nolton Hill Estate a real place?

Phillip Schofield and Matthew Wright clash on This Morning over whether Covid-19 ‘trumps’ mental...

Ryan Reynolds Calls It an Honor to Make Cameo on One of Alex Trebek’s...