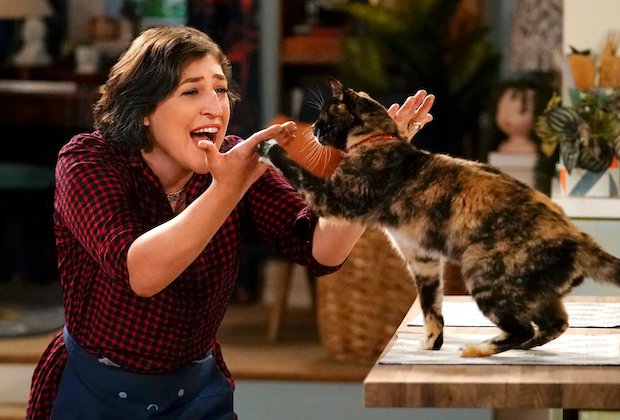 Viewers of Call Me Kat, the new American reboot of Miranda starring Mayim Bialik as the titular character, have applauded the sitcom’s second episode for making a ‘huge improvement’ after the pilot.

When Call Me Kat premiered on TV network Fox earlier this month, initial responses were mixed.

The series follows a lovable woman called Kat (Big Bang Theory’s Mayim) who decides to open a cat café, quitting her teaching job in the process.

In doing so, she disappoints her overbearing mother Sheila (Swoosie Kurtz), who is of the opinion that her daughter can’t possibly be happy at the age of 39 while still single.

While some praised the first episode of Call Me Kat for delivering laughs and ‘positive vibes’, others were left feeling ‘disappointed’, with one person saying that they found the adaptation ‘forced and artificial’.

However, it appears that the general consensus on the second episode is that viewers are finding the show far more favourable as it progresses.

After the second instalment aired on Thursday evening, one viewer said that while they still feel ‘on the fence’ about the sitcom, ‘it’s trending in the right direction’.

‘#CallMeKat: pilot was atrocious, but episode 2 had some genuine LOL moments, so let’s call it even,’ another person tweeted.

‘Episode 2 was a huge improvement over the pilot. I look forward to seeing how the rest of the show plays out,’ someone else said.

One viewer said that they usually try to refrain from judging a series after just the first couple of episodes, as character development ‘takes time’.

‘I do think America needs this kind of comedy sitcom. Especially now. I’ll be watching,’ they added.

‘For a sitcom to find its legs as quickly as the second episode usually means it will be a hit!’ they remarked.

However, others were less complimentary about the new series.

‘I reeeeeeeeeally want to like #CallMeKat because I have so much respect for Mayim Bialik and I adore Kyla Pratt and, of course, Leslie Jordan is a national treasure, but I turned it off after the first commercial and watched old-school #supermarketsweep. Sorry,’ a Twitter user admitted.

‘#CallMeKat is an Americanized version of the show Miranda. It’s like they took a good English Cheddar and turned it into Velveeta,’ another commented.

Call Me Kat, which is executive produced by Mayim’s Big Bang Theory co-star Jim Parsons, also stars Leslie Jordan as the head baker at Kat’s café, Kyla Pratt as a waitress and Cheyenne Jackson as a friend and former lover of Kat’s from college.

Every Movie Delayed Due to Coronavirus: Find Out the New Release Dates

‘Cobra Kai’: Tamlyn Tomita on Returning as Kumiko More Than 30 Years After ‘Karate...