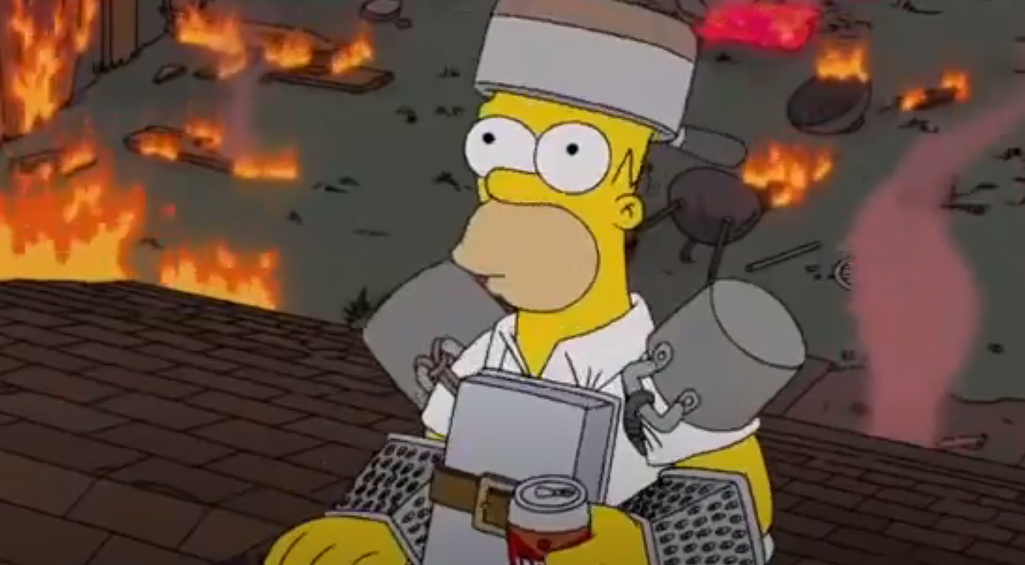 Did The Simpsons make another freaky prediction about the state of the world? Fans have been left speechless as it appears the cartoon foresaw the protests at the US Capitol following the election.

There were shocking scenes in Washington DC on Wednesday as supporters of Donald Trump stormed the meeting place of congress in a chaotic attempt to rally against Joe Biden’s victory.

One woman was shot dead by police and a further three people died due to medical emergencies during the carnage. Order has since been restored.

In The Simpsons’ 31st Treehouse Of Horror episode, the Fox show made a pretty damning projection revealing how bad the US could turn out given that Homer failed to cast his vote and he was the decider.

The cartoon then fast-forwards to Inauguration Day on January 20th 2021, where Springfield is thrown into the apocalypse – or ‘civil war’ as some fans have deemed it.

Homer sat on the roof of 742 Evergreen Terrace, dressed in armour made from kitchen utensils, while the town is aflame and people fight each other.

Simpsons fans couldn’t help but notice the striking similarities of events that broke out in Washington DC yesterday, and flooded Twitter in shock.

‘Simpson’s did it again,’ wrote one. ‘I just can’t wrap my head around how they seem to predict every possible thing that happens in this country.’

‘NO WAY DID THE SIMPSONS PREDICT THE CIVIL WAR,’ another added.

But it’s not just the latest Treehouse Of Horror episode that appears to allude to violence at the Capitol.

A 1996 episode, titled The Day The Violence Died, also hints at riots with a number of characters storming the Capitol with bombs and guns after a constitutional amendment tries to ban flag burning.

The Simpsons has an uncanny knack of predicting the future, including the fall of JCPenney, Trump’s presidency to even ‘foreseeing coronavirus’.

So what’s it going to hit us with next?

The Simpsons is available to stream on Disney+.

‘The Bachelor’: A Woman Leaves After Being Confronted By the Women — But New Contestants Are Coming

‘The Bachelor’: A Frontrunner Breaks Up With Matt James After Drama With ‘Cruel and Malicious’ Women

Rail expansion across Europe and Africa as UK borders close