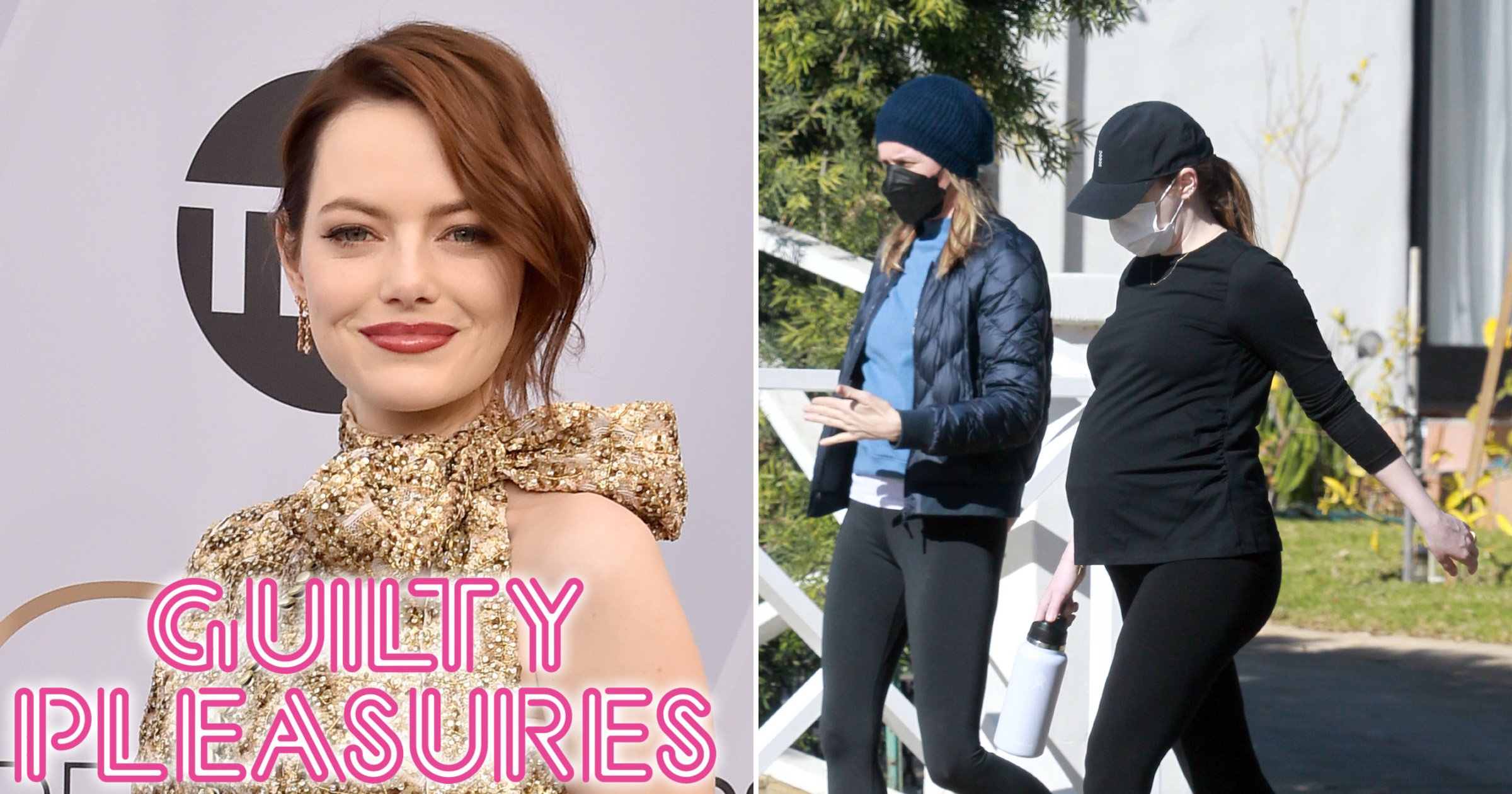 It looks as if Emma Stone will be trading La La Land for ga-ga land… she is reportedly expecting her first child with Saturday Night Live director Dave McCary.

The 32-year-old actress was spotted cradling a large bump while strolling through LA on Monday. ‘It’s been so nice for them to be home and have this time together before the baby,’ a source told Entertainment Today.

‘They’re going to be the best parents. They are both great with kids and they make such a great team.’

Another insider told Us Weekly: ‘She seems very happy and very excited about becoming a mother — she’s constantly oohing and cooing. She looks great, she looks healthy, she’s glowing.’

While marriage hasn’t been officially confirmed, it is thought that they wed secretly last September when they were seen wearing matching gold rings.

One Director-ion! A new love for Harry

Harry Styles is Wilde about the girl — as it emerges he and Olivia Wilde are dating.

Hazza, 26, is said to have struck up a relationship with the 36-year-old actress and director while filming her new movie Don’t Worry Darling, in which the former One Direction star plays the lead role.

The duo were seen holding hands at his agent’s wedding in California during the weekend, where it is said Harry introduced her as his girlfriend.

‘This relationship between Harry and Olivia is very new,’ a source told Page Six. ‘Olivia has been directing Harry in the movie in Palm Springs, and there were literally ten people on the set, because they were strictly adhering to Covid rules.

Harry had been staying at James Corden’s house near Palm Springs during filming, and so they were able to be alone and keep their relationship very secret.

The ten-year age gap between the pair isn’t thought to be an issue. The Watermelon Sugar singer is famously open to dating older women following spells with Taylor Swift, 31, and Kimberly Stewart, 41.

Olivia, who split from her long-term partner Jason Sudeikis last November, has two children with the actor — Otis, six, and Daisy, four.

Olivia recently told People she ‘did a happy dance’ when Styles agreed to replace Shia LaBeouf in her upcoming thriller.

Gemma Chan has described working with Meryl Streep as a ‘bum-clenching’ moment. The British actress, 38, has become a huge name herself since starring in 2018’s Crazy Rich Asians, but that didn’t stop her from feeling the pressure when acting opposite Meryl in last year’s Let Them All Talk.

‘It was just such a dream project,’ she said. ‘A lot of the dialogue was improvised. There’s a scene, a lunch in New York with Meryl, which was actually the first scene that I shot.

‘So I arrived on set and the whole restaurant was full of 200 extras, you could hear a pin drop, I went in and sat down, then Meryl came in and sat down, and we just had to improvise a scene. I don’t think I’ve ever had such a clenched bum! I was petrified. There I am, with possibly the greatest actress of all time, and… “Action!”’

Gemma can expect more attention as she gears up to star in Marvel’s superhero romp Eternals later this year, but the star, who has been dating Dominic Cooper, 42, since 2018, also spoke about the importance of female representation.

She told Elle magazine: ‘I wish we didn’t have to talk about why it’s unusual to have a female lead. Why is it still so unusual to have half of the human race being centred in these stories?’ Read the full interview in the February issue of Elle, on sale from Friday.

Spot the resemblance as Bey pays tribute to ‘Queen’ mum

So that’s where she gets it from! It turns out that Beyoncé was always Destiny’s Child as she shared a throwback pic of her mum stretched out on a sofa rocking a leopard jumpsuit.

The 38-year-old singer, no stranger herself to an animal print, posted the snap on Instagram to wish her mother Tina Knowles a happy 67th birthday. Bey, 38, wrote: ‘Happy birthday to my beloved matriarch! You are my Queen, my heart, my strength, the bone in my spine.

‘You are my inspiration. I hope you have everything in your life that your soul desires. Mama, I love you deep deep!’

It was grim, says Shady

Eminem is RiRi sorry for the hurt he caused Rihanna for making light of her assault at the hands of Chris Brown. In his new track Zeus, the 48-year-old rapper says: ‘I’m sorry, Ri. It wasn’t meant to cause you grief.’

No Love for ex Coogan

There’s no love lost between Courtney Love and ex Steve Coogan. The former Hole singer, 56, was describing her America’s Sweetheart record when she said: ‘Like Steve Coogan, or crack, it’s one of my life’s great shames.’

Ricky Gervais wants to be fed to the lions after death. Ricky, 59, told chat show Conan tourists’ faces would be funny ‘when this fat, naked dead body is thrown out and they go, “Is that the bloke from The Office?”’

■ He may already have a large congregation of true Beliebers — but that doesn’t mean Justin Bieber is planning to become a church minister.

Rumours started swirling in the new year that Biebs was interested in a leadership role at his local church following the exit of its pastor. But the 26-year-old slammed down those suggestions in an Instagram post, saying: ‘I’m not studying to be a minister or anything even close to that. Have no desire for that. This is fake news.’

Justin, who credits his church with pulling him back from ‘dark’ times, continued: ‘Church is not a place. We are the church.’

The Queen’s Gambit, Emily in Paris and Bridgerton are all the same: colourful, people-pleasing...

Leonardo DiCaprio and Jennifer Lawrence in first look at Don’t Look Up as Netflix...