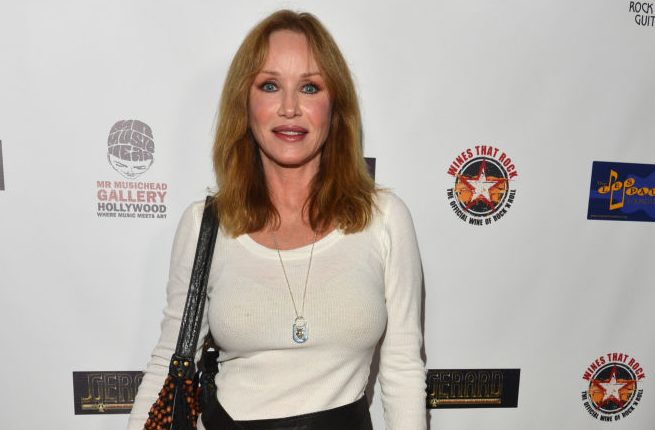 Ashton Kutcher told Topher Grace their That 70s Show co-star Tanya Roberts is not dead following his tribute to her.

The actress, 65, was said to have died after collapsing on Christmas Eve according to her rep Mike Pingel, but it has since emerged that she is alive and in hospital. Her reps have since retracted the reports announcing her death.

Actor Topher, who played Eric in the sitcom, had written on Twitter: ‘I was so sad to hear that Tanya Roberts has passed away. She was a Bond girl, one of Charlie’s Angels, and truly a delightful person to work with.

‘I had never acted before and, to be honest, a little nervous around her. But she couldn’t have been kinder. We’ll miss you Midge.’

Ashton, who played Kelso, replied to his tweet: ‘yo bro she’s not dead’, with his co-star replying with a GIF of Kelso celebrating.

The Jobs star responded with a meme of Kelso saying ‘Burn!’.

Pingel had earlier issued statements explaining how the actress was rushed to hospital after collapsing following a dog walk. She was put on a ventilator but reportedly did not recover.

Now, Pingel says that Roberts’ longtime boyfriend Lance O’Brien received a phone call from the hospital at around 10am on Monday morning to inform him that Roberts was alive. Pingel said O’Brien ‘truly believed’ Roberts was dead.

It followed the coming of age antics of a group of teenagers in 70s Wisconsin.

In 1985, Roberts became a Bond Girl to Roger Moore’s James Bond, starring as Stacey Sutton in action classic A View To A Kill.

MORE : Larry King, 87, moved out of ICU after being hospitalised with coronavirus

Healthy foods you should avoid when sick