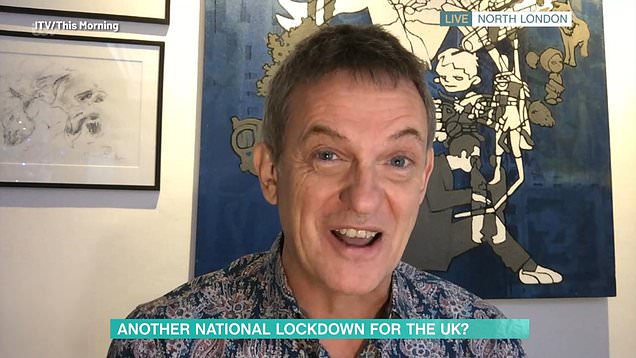 Matthew Wright fears his entire family has caught coronavirus with his one-year-old daughter so ill he feared sending her to the hospital.

The Wright Stuff presenter appeared on This Morning today and spoke about Cassidy, who turns two at the end of this month, and his wife Amelia, who have both come down with a nasty illness.

While he stated he didn’t know for sure it was coronavirus, Matthew opened up about his fears it could be, especially considering a neighbour was currently on a ventilator after testing positive.

He told Phillip Schofield and Rochelle Humes: ‘Cassie’s been coughing through the night coughing up phlegm, and making herself sick from coughing during the night.

‘It’s been pretty grim and I’m trying not to try not to panic, trying not to call an ambulance knowing the hospitals are going to be overcrowded.

‘So we’re just trying to keep a cool head on things, and push on through it.’

When he was told that he should absolutely take his daughter to hospital if her illness continues, Matthew said he was worried about ‘pushing through the unmasked COVID protest to say it’s a hoax’.

Phillip also reassured him that it may not be Covid and instead a Winter bug, which often appear at this time of year.

‘It’s eased off a bit in the last 36 hours,’ he said. ‘We’ve also had to offset it with the fact that we’ve got a neighbour who went down.

‘He was in intensive care on Christmas Day, no underlying health conditions. Just over 60, and we’ve heard that he may have his life support turned off today.

‘So we have to put our situation in relative to everybody elses, and you know, technically, statistically, we’re going to be okay so we’re just going to push on through.’

This Morning airs weekdays from 10am on ITV.

Ralf Little ‘told off’ by Death in Paradise bosses after flying to see his...

The 369 Manifestation Method Is Going Viral On TikTok. Here’s How To Do It