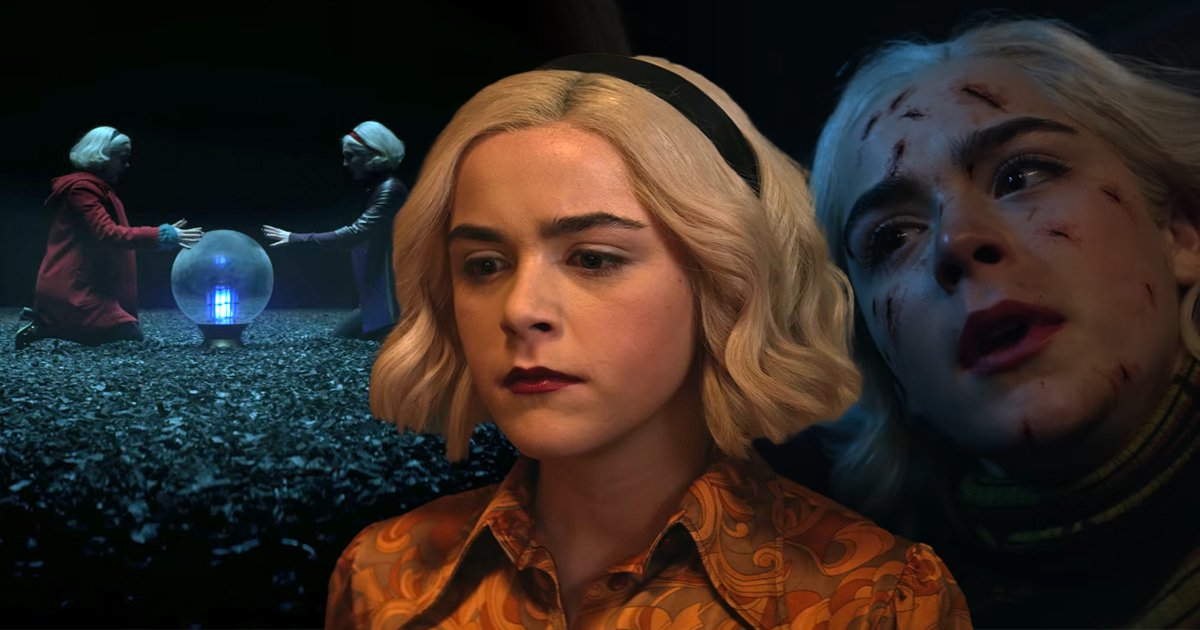 The Chilling Adventures of Sabrina has come to an end – and if you’re familiar with the show at all, you know it wasn’t going to be a simple exit.

With a bonkers plotline to end all bonker plotlines, Sabrina and the gang said their goodbyes to viewers as season four came to its nailbiting conclusion.

But how exactly did it happen?

We’ve got you covered – here’s the essential info.

What happened to Sabrina at the end of CAOS?

Well, in a twist noone actually saw coming, Sabrina (both versions of her) were killed off.

After splitting into two people at the end of season three, they became known as Morningstar, who embraced life as Lucifer’s daughter, and Spellman, who continued to life her ‘path of light’ on Earth.

Morningstar, who was caught up in a duplicate world, manages to reunite with Spellman and crashes through her magic mirror, dying as she warns that The Void is on its way to destroy the Earth.

To stop the world from being destroyed, Sabrina and her family and friends go after the Eldritch Terrors, eight seemingly unkillable and world destroying entities – one of which is The Void, which could suck existence into a nothingness.

Taking hold of Pandora’s Box, a vessel that seemingly contains untold evil and chaos, Sabrina then heads into The Void alone to save her loved ones, blocking off its entrance.

Sucking The Void into Pandora’s Box, her plans seems to work until her well-meaning aunts Hilda and Zelda cast a spell to get her back, and pull her soul back to their world, and into Morningstar’s body.

(Thankfully they look exactly the same so you couldn’t really tell, but it’s still a little confusing.)

Still with us? Good.

So the next day is Sabrina’s 17th birthday, meaning everything that happened in the past four seasons happened within the space of a year. That’s utter madness, but regardless, we carry on.

Things are still not right with the teenage witch, and it’s discovered that The Void is not in the box, but inside her, with things going missing when they get into too close contact with her.

Distraught, she banishes herself away from everyone, but not before the power-hungry Faustus Blackwood finds out, and he heads off to try and find her at the Mountains Of Madness.

Tracking her down, he tries to drain Sabrina of her blood, and of The Void, so he could take it as his own. But he fails and is stopped by Sabrina’s friends and family who have also tracked her down.

Unfortunately, this is when they discover that her being drained is the only way to expel The Void from her body, and she decides to do the ritual to save everyone.

Saying goodbye to everyone, boyfriend Nick is heartbroken and promises to see her ‘on the other side’.

This turns out to be the case sooner rather than later, with the pair reuniting in ‘The Sweet Hereafter’, drowning in the Lake of Sorrows.

The Chilling Adventures of Sabrina is available now on Netflix.

MORE : Chilling Adventures of Sabrina star Kiernan Shipka calls for Riverdale crossover: ‘They could use a witch’

Jill Halfpenny on Strictly, her worry for the arts and whether she’ll ever return...

Death In Bollywood uncovers dark side of industry as Jiah Khan becomes victim of...