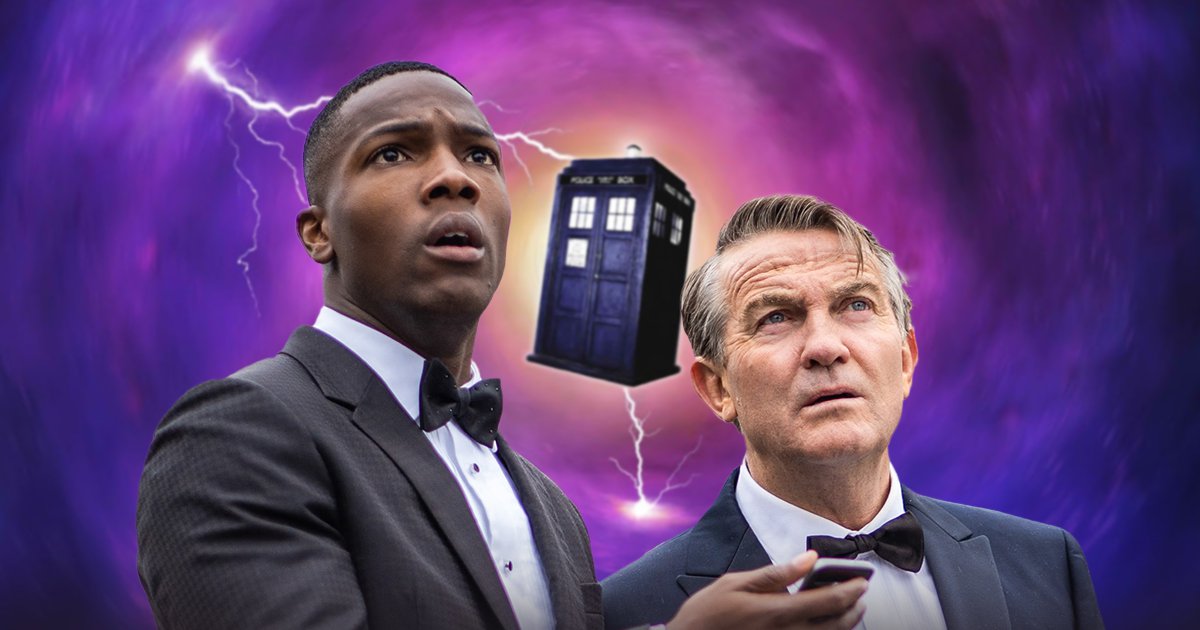 *Warning: Spoilers for Revolution of the Daleks ahead*

Doctor Who has officially said goodbye to Bradley Walsh and Tosin Cole after two years, with the pair departing in the festive special, Revolution of the Daleks.

The duo deserve an almighty send-off after making their mark as Ryan Sinclair (Tosin) and Graham O’Brien (Bradley) in the series and they’ll definitely be missed.

However, their exit is the best thing for the show going forward.

Don’t get me wrong – I’m a huge fan of Bradley and Tosin and their characters’ dynamic has been glorious to watch.

Ever since they crashed onto screens alongside Mandip Gill (Yaz) and, of course, Jodie Whittaker (The Doctor) in The Woman Who Fell To Earth, they’ve made a big impression on fans.

Immediately bonded by the death of Grace, Graham’s wife and Ryan’s grandmother, their fractured relationship began to heal and the pair eventually became incredibly close.

It’s more evident than ever in Revolution of the Daleks, and it feels like a really fitting end to their story as the pair leave the Doctor, Yaz and life on the TARDIS behind to focus on strange occurrences closer to home, and saving Earth from any outside threats.

That’s all after Graham finally teaches Ryan how to ride a bike, of course.

However, for me, their two series have exemplified that the show just doesn’t work as well with so many companions.

Ever since the early days of Classic Who, the formula has been clear – the Doctor goes on adventures, joined by a companion.

Of course, that would get super dull if it wasn’t mixed up, so showrunners Russell T Davies, Steven Moffat and Chris Chibnall have played around with it, bringing us the likes of Micky Smith (Noel Clarke), and the inimitable Jackie Tyler (Camille Coduri).

Even having Rory Williams (Arthur Darvill) along for the ride with Amy Pond (Karen Gillan) worked, and their exit remains one of the most heartbreaking of all time because of their close bond with each other and the Doctor (Matt Smith).

But, for me, three is a crowd.

I found it difficult to get to know Yaz, Graham and Ryan, and ultimately found that I wasn’t rooting for them as much as I have for past partners of the Doctor.

In series gone by, the connection fans have had to companions is amazing, even those who only stayed for a series. I’m not being dramatic, but I would protect Donna Noble (Catherine Tate) with my life.

But, two series in, I feel like we’re only just getting to know the trio.

Now, with Bradley and Tosin leaving, it looks like Mandip – and Yaz – will really get a chance to shine.

With the writers seemingly easing us in to Graham and Ryan’s exit in the New Year special by showing their uncertainty about staying with the Doctor, Yaz got a ton more screen time and, in my opinion, more of the credit she’s due, as she teamed up with Captain Jack Harkness (John Barrowman).

She was shown to be intelligent, take initiative, figure things out for herself and challenge the Doctor – everything a good companion needs to do.

She didn’t let the Doctor off the hook for leaving them for 10 months more than promised, and she’s been faced with the heart-wrenching question of whether it would be better to have never known her than deal with the inevitability of eventually living without her.

In one episode, I fell completely in love with Yaz – more so than I have in two years, and I can only hope it’s a sign of things to come.

We’ve had it confirmed that John Bishop will be joining the cast, so it’ll be interesting to see how he fares.

I’ve got mixed feelings about it – I would have loved to see the Doctor and Yaz go it alone but have high hopes that the Liverpudlian legend will slot in seamlessly. Only time will tell!

Meanwhile, I have no doubt that acting and presenting legend Bradley and Tosin will go on to more brilliant things.

Bradley, of course has been smashing it on The Chase and Tosin has landed the lead role in upcoming US series 61st Street, which is being executive produced by Michael B Jordan.

It’s been a joy to watch them both, and they’ve definitely got a fan in me.

But I’m really glad they stepped back when the time was right. To go on any longer would have done a disservice to their characters, and it’s time for something new.

Yaz, let’s see what you’ve got!

Resolution Of The Daleks is available on catch-up on BBC iPlayer.

MORE : Doctor Who: Christopher Eccleston took just ‘two minutes’ to get back in character as Ninth Doctor

Jeremy Clarkson has a church founded in his honour after visiting Ugandan town of...

Coronavirus antibodies 83% protective against reinfection for at least the next five months, study...

5 things a Peloton instructor wants you to know about staying...

As Emma Thompson is cast as Miss Trunchbull in Netflix’s ‘Matilda’,...