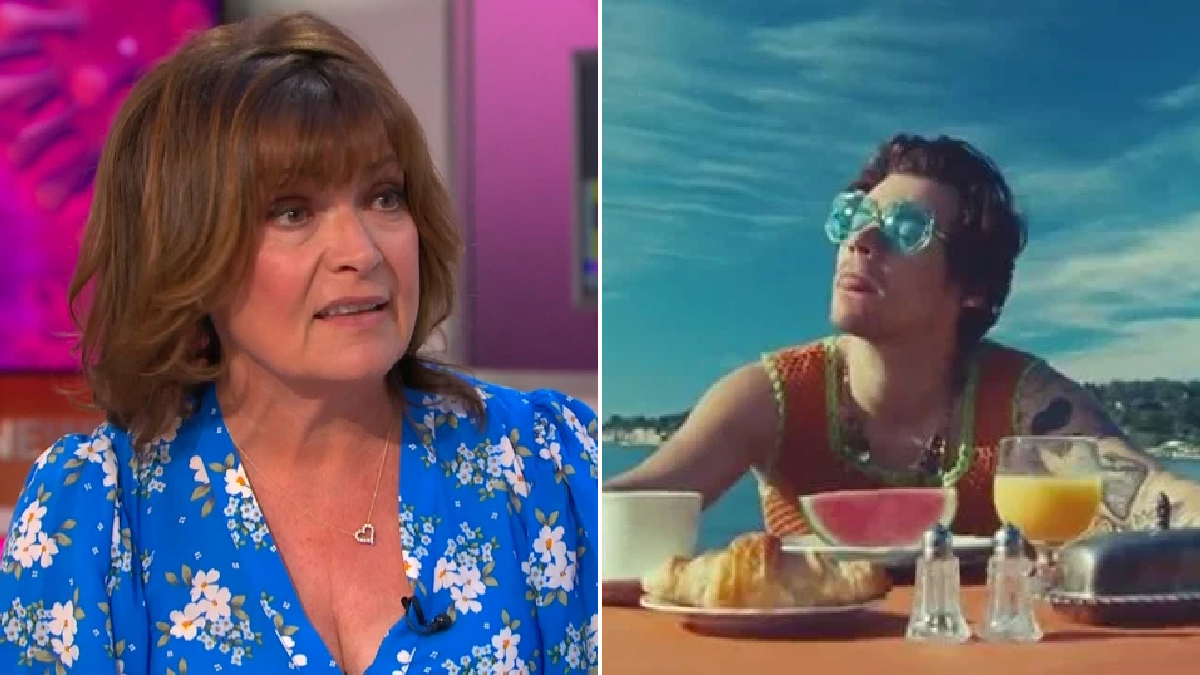 The pop star recently dropped his music video for the hit Watermelon Sugar, seeing the 26-year-old frolic on a beach with a bunch of bikini-clad models.

And while discussing the new release, the daytime TV host quizzed the GP on what the lyrics mean – after many have suggested the singer is referencing oral sex.

‘Tell me about Harry Styles,’ the 60-year-old asked showbiz expert Ross King. ‘Because Harry is back with some new music, he’s been busy.’

The Good Morning Britain regular said: ‘He is indeed. Watermelon Sugar, make of that what you will, a lot of people have got many different ideas about what it’s about.’

Joking with both Lorraine and Dr Hilary, who joined the presenter on the show, Ross added: ‘I’m sure Dr Hils will assist you in that one as well.

‘It is from his second album Fine Line, the music video was shot in Malibu that was when there was no social distancing whatsoever.’

‘Do you know, isn’t that strange to see people up close and personal?’ Lorrain said before adding: ‘Apparently watermelon is rude and I’m going to get told all about it later.’

She blushed as the health expert giggled behind her: ‘Honesty, I’m so naive.’

After discussing all the showbiz goss, Ross signed off with: ‘After you’ve spoken to Hils about watermelon sugar, give me a call.’

Our toes couldn’t curl back any further.

Harry has been dubbed the ‘consent king’ after model Ephrata spoke about her positive experience on set during a session on Instagram Live.

She said: ‘The people were telling him to touch my hair and play with it and he was like, “Wait, wait, wait, pause – can I even touch your hair? Is that even okay?” ‘

Good Morning Britain continues weekdays at 6am on ITV.

Saved By The Bell reboot trailer gives us a first look at the new...

Nella Rose shares heartbreaking tribute to father after his death as fans defend her...