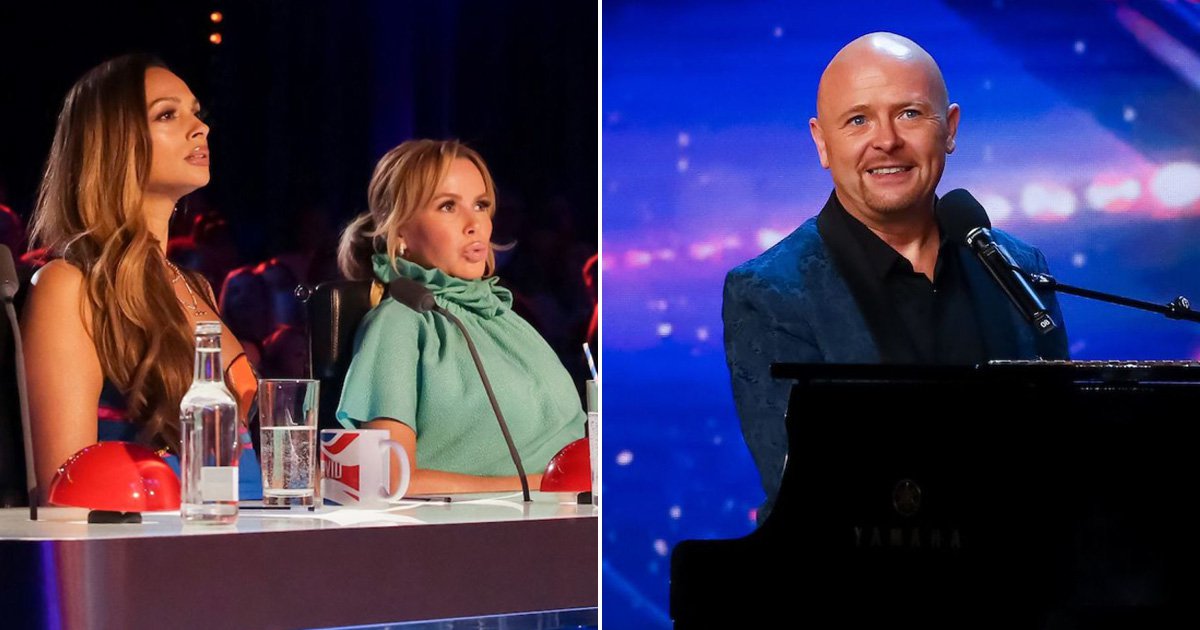 Amanda Holden and Alesha Dixon had tears in their eyes after watching Jon Courtenay’s act which combined singing with comedy on Britain’s Got Talent.

Judges Simon Cowell, David Walliams, Alesha and Amanda are back tonight as they reunite for the second episode of the ITV series.

And while comedians are meant to make you laugh, Jon’s moving performance left the judges and the audience reaching for the tissues by the end.

The 46-year-old got a tad choked up as he told the judges before he began his performance: ‘The Palladium is like the Holy Grail to me, I used to watch shows with my dad and this is the home of variety, overwhelming, it’s amazing.’

‘There was a man who had a dream, that Simon Cowell and his team would watch him play the piano and try to slay them,’ Jon sang.

‘And in the time that one song took, David, would write another book, Alesha would smile at him, Amanda would be kind to him, Simon’s teeth would be blinding him if he was smiling.’

Hosts Ant and Dec could be seen clapping at the side of the stage as Dec exclaimed: ‘I like this already, yes Jon.’

And while the father-of-twos act had the audience in stitches, when it got to the end, things got a bit emotional as he incorporated his sons into the song.

‘His dad taught him to play piano but he didn’t live to see, his son at the famous theatre performing on TV,’ he continued to sing.

‘If he didn’t see through, imagine how sad, the look on the faces of both his lads who always tell him “you’re the greatest showman dad”.’

And if it wasn’t emotional enough, Jon’s two sons were sat in the audience with his wife tearing up.

We’re not crying, you are!

Amanda commented: ‘Jon you have made me fall to bits, I don’t know why, I just saw a man who made all his dreams come true.’

‘It has everything, and by the end it had us moved to tears,’ Alesha added.

James Johnson is also among the next cohort of auditionees, as well as Clare Harrison Mccartney and the group Shalom Chorale.

Britain’s Got Talent returns at 8pm on ITV

Peugeot supermini shows how far electric vehicles have to go